With her plan finally reaching a conclusion, June realises she will go to any lengths possible to see it through.

Throughout this season of 'The Handmaid's Tale', the one point that's been continuously hammered is that it all has to mean something.

The degradation, the abject horror, the endless misery, it can't just have been for nothing. When we last left June, she was standing over the grave of Commander Lawrence's wife, with the Commander eyeing her with suspicion. This, it seems, gets dismissed pretty quickly in the final episode, with Commander Lawrence and June arguing briefly about cancelling the escape plan, but otherwise back to normal. This is something that's happened again and again in 'The Handmaid's Tale' - something is keyed up in the final moments of an episode, only for it to be nullified the very next week.

As carefully laid throughout the season, the plan sees June smuggling 52 children out of Gilead in the cover of darkness on a commercial plane to Canada. It's not all that surprising, then, that a Martha turns up way earlier than expected with a child and seems more than likely to completely scupper the whole thing. Sure enough, that's what happens when she decides that her mistress is "forgiving" and will take them back. It's not long before June, clearly done with people backing out on on her, grabs her pistol and seems fully prepared to blow the reluctant escapee away if she bolts now. 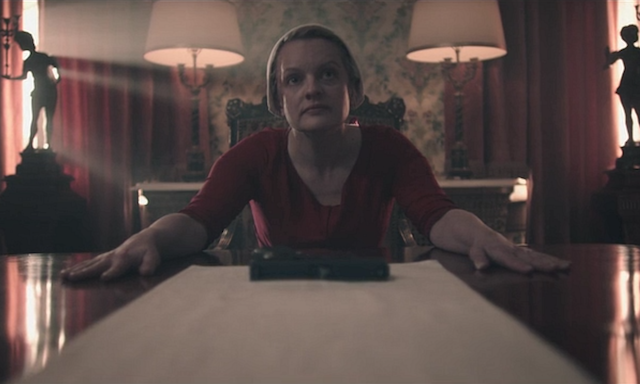 "This is the weirdest-looking birthday cake."

Again, this is another point that's been hammered home throughout the final episodes of this season and is done so in 'Mayday' yet again - just how far will June go to see her plan executed? Would she kill an innocent woman? Would she turn that pistol on a child? While she ultimately blinks before she can do one or the other, it really does show the toll putting all this together has taken on her soul.

Meanwhile, in Canada, Serena seems quite cushy in her prison and is even potentially looking at being released, yet it's not long before the tables turn with Commander Waterford effectively ratting her out to the American agent, telling him that Serena induced Nick Blaine to impregnate June, thus it still counting as a rape. It's a brief moment, but it shows just how quickly both the Waterfords turned on one another and how, at long last, Serena is about to get what she deserves.

The final act of 'Mayday' sees June leading the children - way more than 52, it transpires - to the airport through backwoods, with Commander Lawrence remaining behind to "fix his own mess," as he puts it. There's a brief moment between Lawrence and June, where they joke about their relationship and it shows that even in the tensest moments, humour can bubble up easily. The way in which the escape is directed really captures the terrifying reality of what those who have fled real-life countries. That so much of 'The Handmaid's Tale' is taken from real experiences means it all comes with a kind of grim authenticity. 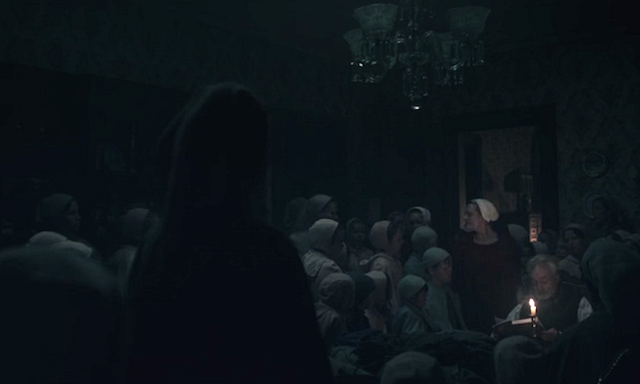 "Gather round, children, and I shall read you the story of 'Billy Madison', a movie that I was in that people often forget..."

Yet, for all of this, the escape itself does smack of a little too much Hollywood for its own good. June, smiling, strides out to meet the guards and distract by throwing one symbolic rock, which in turn becomes a wave of rocks as the other Marthas and Handmaids come to her aid. For a show that's lain so much groundwork with a kind of subtlety, it goes hammer and tongs in the finale. There's nothing wrong with 'Mayday', per se - it's just odd to see the change in tone.

In any event, it works - both for the escape and emotionally - because when June is eventually put face to face with a lone guard who chases after her, we get one of the most satisfying moments in the season. When she calmly, smilingly asks the border guard - whom she's got the drop on with her pistol - to call in as a false alarm, she thanks him sweetly and then shoots him straight in the face. Again, it's a classic case of Chekov's gun and it's not so subtle, but so what?

Compared to the season finale of last season, 'Mayday' ends in a similar fashion but one that feels far more earned. Throughout the second season, we saw June desperate to get out of Gilead and then - almost on a whim, it seemed - deciding to stay behind to get her daughter out. This season, however, ends with her carried off by her fellow Handmaids as a hero, bloodied but unbowed, and smiling as she quotes the Book of Exodus, where Moses was visited by God in the form of a burning bush and told to lead his people out of Egypt.

What does this mean for the fourth season? Clearly, the Canada / Gilead storyline is going to have to come forward as there now seems to be enough evidence from the likes of Commander Waterford and Serena to make a case for invading Gilead. Not only that, a plane full of children evacuated seems to add to that. For June, however, is it simply just more of the same? In a lot of ways, 'The Handmaid's Tale' has backed itself into a corner with this season.

June has finally realised her destiny as a rebel leader, a partisan way behind enemy lines who will stop at nothing to bring down Gilead. While she's not exactly strapping on a machine gun and bandana, and going full Rambo on it, there has to be more to it than that. The dismantling of Gilead has to begin, the fight back has to begin to take place. It can't all just be tight whispers and frightened glances - and June can't end up being brutalised in another Commander's house, surely?

Given how repetitive this season was in parts, you've got to hope that the writers themselves know that this can't continue. Here's hoping for Season 4.