'Useful' explores the dynamics and peels back some of the layers on Commander Lawrence.

Three episodes into its third season, and by now, we should all know that 'The Handmaid's Tale' moves at its own pace.

This week's episode, 'Useful', offers up an intriguing and maddening look at Commander Lawrence (Bradley Whitford). If you ever watched 'The West Wing', the idea of Bradley Whitford playing a sly, domineering misogynist probably wouldn't figure. The episode's title comes from a snide remark, wherein Commander Lawrence humiliates June (Elisabeth Moss) in front of his fellow Commanders. "See, women can be useful," he growls, to genial laughs and darting glances.

Much of the scene, and how the other Commanders have to come to him rather than he to them, shows that power dynamics in Gilead aren't just between men and women. Power ascends further, and Commander Lawrence sits somewhere near the top. Yet, interestingly, he never comes across a true believer in their system and laws. He regularly forgets the punishments for women, seems to enjoy keeping the women in his household off balance, but then seemingly makes a point of humiliating June. Was it just for show? 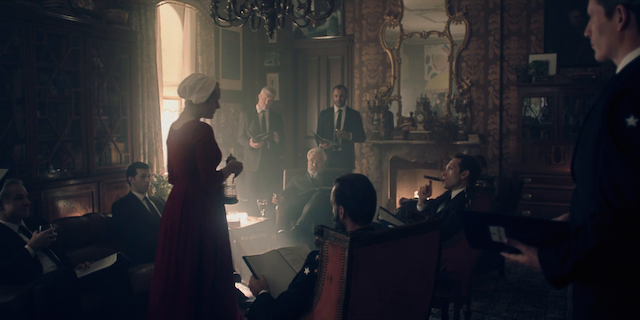 June / Offred (Elisabeth Moss) and Commander Lawrence (Bradley Whitford), together with the Commanders of Gilead

It's only later that June confronts him with all of her (and our own) questions as to what his game is. Why does he allow a rebel cell to operate out of his home? Why did he help Emily? Could it simply be because he deems people to be useful and not useful? Is it as binary and black-and-white as that? Nothing in 'The Handmaid's Tale' so far has led us to believe that it's that simple.

Look at that scene between Serena (Yvonne Strahovski) and her mother (Laila Robbins), wherein we see that the hardness and cruelty doesn't just come from the Commanders in Gilead, it comes from the women of Gilead as well. Serena's grief threatens to engulf her at every turn, and yet her mother feels precious little sympathy for her, coldly remarking that the baby isn't even hers. You can almost hear the disdain in her voice for her daughter's inability to conceive, and it's clearly something that weighs on Yvonne's mind; that idea of her womanhood being denied by her failure. 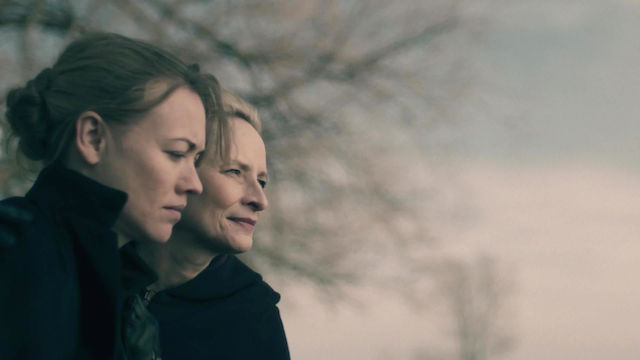 Commander Waterford (Joseph Fiennes) only turns up in a scene or two, but all you need to know about him is the scene in which he gives a heartfelt, contrite speech about loving his wife - which eventually pulls back to reveal one of the sex slaves in Gilead.

Where 'Useful' culminates is in Commander Lawrence giving June a choice to save five women, locked behind cages. The rest of them will be deported to the Colonies and, presumably, die a slow death. In the final moments, we learn that June has picked useful women. Just not the kind Commander Lawrence expected. The narration describes June's mother, played in the last season by veteran actor Cherry Jones, hoping to create "a culture of women" in the world, and that now her daughter may live to see it.

Little by little, the third season is building to something. And it's about time.