Heroics take sacrifice, but is it worth for June?

Following on from last week's episode, it looked as though June and Commander Lawrence (Elisabeth Moss and Bradley Whitford) were facing into the very real possibility that they might have to shoot their way out of Gilead in 'Sacrifice'.

Of course, this is 'The Handmaid's Tale' and thinking like that will always leave you disappointed. In fact, it's kind of telling that the pistol was basically dismissed in the first moments where, in a rare bit of humour, June aims it at Mrs. Lawrence who reacts like she's seeing a child play with a hairdryer.

It turns out that Commander Lawrence is not quite the marked man he once thought he was, and that his "good counsel" is needed in order to keep the border open and avert World War III with the US and Canada over their capture of Commander Waterford. For Lawrence, however, he needs to keep the border open so that he can escape with the 52 children and his wife. Meanwhile, the murder of Commander Winslow (Christopher Meloni) appears to be nothing more than a simple disappearance, and when Mrs. Lawrence blurts out in the middle of a tearful meeting with his wife that she can save his children, things seem ready to derail. 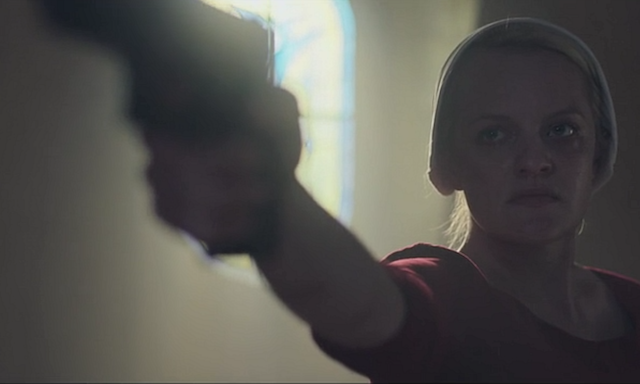 What 'Sacrifice' is talking about really is how heroics often come with a cost, and what the cost of that is determines the person. For Serena, her idea of heroism means returning to her daughter and betraying Commander Waterford to the Americans. While she's tearful in their first meeting since capture, Commander Waterford realises that she's turned on him and that it "was always about (her)", and getting her daughter back. Yet, when Serena eventually meets her daughter, Moira rightfully points out that she - Serena - is really nothing to her daughter. 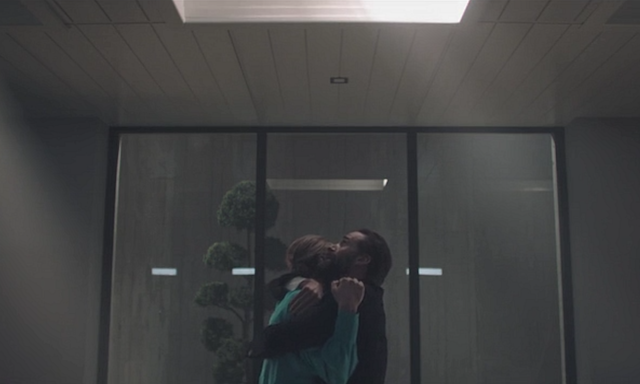 "Sorry that I betrayed you, but Canadian pizza was too good to pass up."

This is only compounded when the social worker calmly explains that she can't refer to herself as "Mommy", because it'll confuse the child. For Serena, her heroism and sacrifice has most likely proven it to be less than worth it, but it's in a final scene with her that we see maybe being a mother wasn't the only thing she got out of this. She can read, have her own thoughts again, and have some kind of agency in what she says and feels.

The real moment in 'Sacrifice' comes when June discovers Mrs. Waterford in her bedroom, having taken a large dose of sleeping pills and is attempting suicide. Just prior to this, Luke and Commander Waterford shared a scene together where Waterford rightfully pointed out that Gilead, and by extension himself, have changed June forever and that she's no longer the same woman who fell in love with Luke.

June tries to wake Mrs. Lawrence but just as she's leaving the room, she stops dead in her tracks and carefully closes the door, sealing Mrs. Waterford in her fate and offering her up as a sacrifice. Thereafter, we can't really look at June in the same light because she willfully, almost happily, let her die when she could have saved her. 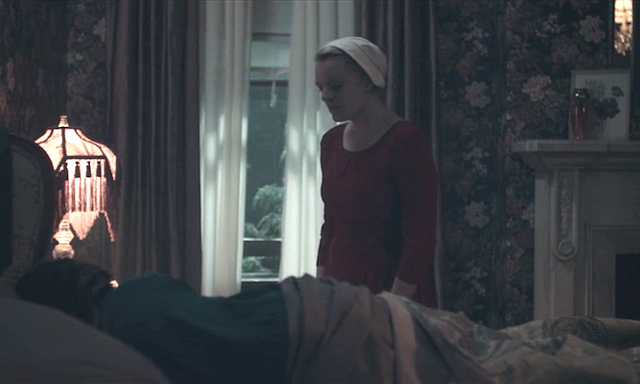 The kind of heightened situation, where it's literally life or death for 52 innocent children, brings out a kind of pragmatism that can be construed as ruthless. If June had tried to save Mrs. Waterford, she would have had to keep her away from the other Commanders for the week leading up to the flight, as she seemed to desperate to try and save other children. Instead, she let her quietly die and then mourned with Commander Lawrence afterwards, looking him right in the eye and knowing that she let his wife die.

Is this a jump-the-shark moment for June? Maybe. That it's taken twelve episodes for June to become the rebel leader we hoped she'd be is by design, as it now feels earned. Yet, if last week's fantastic episode saw her moving towards becoming a hero, this week's episode ends with her being a cold-hearted strategist. The episode ends with Commander Lawrence standing over his wife's grave, eyeing June and no doubt wondering what hand she played her death as June stares right into the camera with her eyes wide open, emotionless and clear of any kind of tears or remorse.

Commander Waterford was right, it seems. June is no longer the same person she once was, and Gilead has changed her forever.