'Twas the night before battle...

It's most certainly the calm before the storm on 'Game of Thrones' with yet another character-driven episode that felt like a premature wake for some of our most beloved residents of the Seven Kingdoms. So many character arcs were completed with a lot of heartfelt moments that you know will make their loss all the more poignant in next week's episode, when let's face it, at least half of them will be wiped out.

The episode began with the confrontation between Jaime and Daenerys in the Great Hall of Winterfell as both her and Sansa called him out for his many crimes against them. Bran, who he had wronged the most of all, remained quiet, only to wink towards their last encounter by saying; "The things we do for love", which you may remember were the words Jaime used as he pushed Bran out the window in season one.

A chat later at the Weirwood tree between Bran and Jaime also proved ominous (when does it not with Bran) when he asked Jaime what made him so sure there would be an afterwards. Is Jaime going to die in next week's episode? His survival, to be honest, would be surprising. He has had one of the best character journeys of the entire series, but you can't help feel that his story has concluded. He has faced up to those he has wronged, left Cersei behind for good, has his brother back on his side and his relationship with Brienne of Tarth may just have gone as far as it could go with that beautiful knighting ceremony. 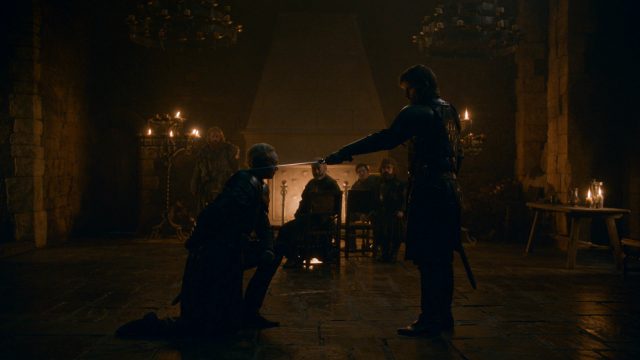 Brienne has been one of the many strong supporting characters on 'Game of Thrones' and to see her get this moment to shine - to finally be recognised by her peers for being the warrior that she is - was one of the highlights of this episode. She too could die at the battle, but it will be the most honourable death of them all.

We were living for the fireside chats with that motley crew of Tyrion, Jaime, Brienne, Podrick, Ser Davos and Tormund. Each of them knowing it could be their last night and Tyrion noting the irony that most of them have fought against the Starks at some point, but here they all were united over a common cause. And isn't this what we have all been waiting for? Yes, 'Game of Thrones' has brought us epic battles and shocking deaths but it's the characters we have always stuck around for. This episode felt like a eulogy to them all and a chance too for us to raise a glass and thank them for their service. Whether it be Tormund's fantastic one-liners, The Hound's unflinching sarcasm or Lyanna Mormont's fearless bravery, each has had a part to play and each has helped bring us to where we are now. The end is near and with it comes certain death for many. But also the knowledge that some key players will have to make it through for the remainder of the season. Unless the last three episodes are just the Night King sitting on the Iron Throne smoking a pipe and if so, well played, 'Game of Thrones'. 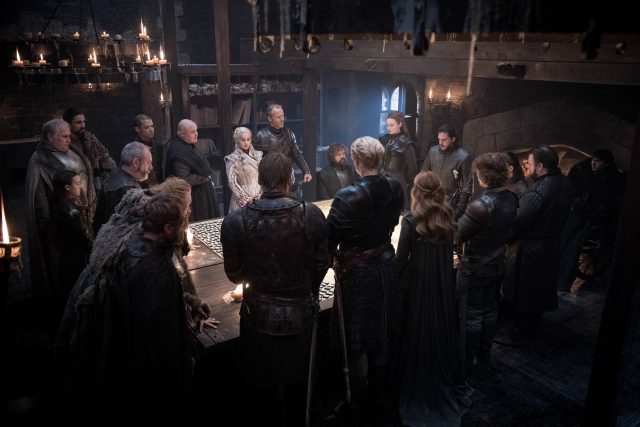 A more likely scenario would be that Jon and Daenerys will definitely survive the battle because these two have a certain claim-to-the-Iron-Throne matter to resolve. Jon's claim outranks hers, something Daenerys realises straight away (why is no one talking about the incest yet?!) but does Jon even want to sit on the throne? Saying that, he certainly didn't jump in to clarify that he had no interest. Something big is brewing with these two and it seems certain that both of them cannot live until the very end.

Daenerys seems to be unravelling with every episode, showing more and more of a tougher, power-hungry side to her that could escalate to some very poor decision making. Maybe Jon will realise she's following a little too closely in her father's footsteps and have to kill her to save others. Or... will Daenerys redeem herself completely and save Jon's life over hers as he is the only one who can continue the Targaryen bloodline? Wild speculation here but maybe.

The award for most touching reunion undoubtedly goes to Sansa and Theon. The last time these two saw each was in season 6 in the aftermath of escaping Ramsay Bolton. Since then, both have gone on to find their strength and have grown as characters, but are bonded forever because of the horrific abuse they suffered together at the hands of Ramsay. Sansa has never shed tears when she was reunited with her siblings but here, she openly wept. Here they were, back at Winterfell together, on their terms. They survived. 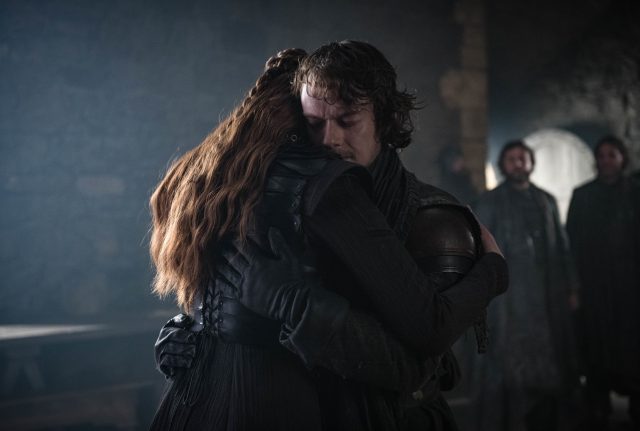 Were we right in thinking there was more tenderness than you would have expected in these moments? It almost seemed like a look of love between them but we don't know how much time there would be to follow that one through. Speaking of following through, Arya and Gendry, amirite? That scene was smokin' with Arya bringing her flirting A-game and taking control of the situation, deciding she would not die a virgin. Although SO weird seeing her strip off, she's of age folks, it's fine but still felt a bit like catching your little sister shifting someone.

There was a strong feminist vibe throughout between Brienne's knighting and Arya's... assertiveness, shall we say. Of course we also had two of the show's most powerful female characters sitting down for a chat to be like, "Hey girl, you're a total badass and I'm a total badass, let's be friends!" Until Sansa dropped her "what about the North?" bombshell and handholding was swiftly halted. Neither woman is to be messed with, and neither will stand down without a fight. Our money would have always been on Daenerys but if there is one thing we have all learned by now, Sansa Stark is not to be underestimated. 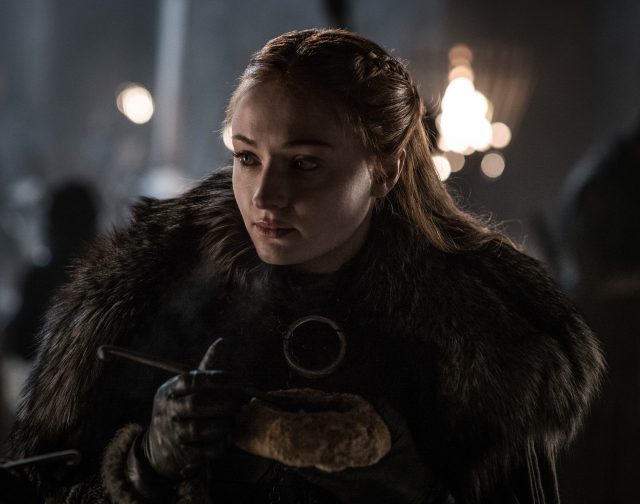 Shout out to some other great character interactions including Ser Jorah Mormont and Lyanna Mormont sharing a scene together for the first time, The Hound and Arya honouring their season 4 road trip together as he tells her "I fought for you", Brienne's scepticism over Jaime not insulting her, Ser Davos and the little girl with greyscale, Tormund rushing in to embrace Jon calling him Little Crow, Tormund again with his random yet brilliant story of how he got his name, Grey Worm promising Missandei a beach hol and the three surviving men of the Night's Watch having a moment on the battlements with Ghost by Jon's Side. (Yes, Ghost is still alive).

We also had that haunting song by Podrick (and then again by Florence and the Machine in the closing credits), which gave us a wonderful pre-Titanic-sinking style montage of everyone. It was all so damn wholesome and lovely. Enjoy this feeling viewers, because this time next week there will be a lot of grieving to do. At least we know nobody is going to die in the crypts right? Because if we know anything, the crypts are safe. Why would the place where all the dead people are buried be where an army of the dead would go? No sirree! Safe as houses down there.

'Lupin' Part 2 may not be parfait, but it's still incredibly enjoyable