The opening sequence of Jon and Daenerys arriving into Winterfell was a mirror image of the Baratheons and Lannisters getting there, from a young kid looking down from a height (last time this was Bran), to how Sansa told Daenerys that 'Winterfell is yours' - similar to how Ned Stark greeted his guests.

Jon and Arya's reunion at the heart tree was also a throwback to Ned and Caitlyn's scene there while the closing moments of each episode were both given to Bran and Jaime - only this time it is Jaime who looks scared. 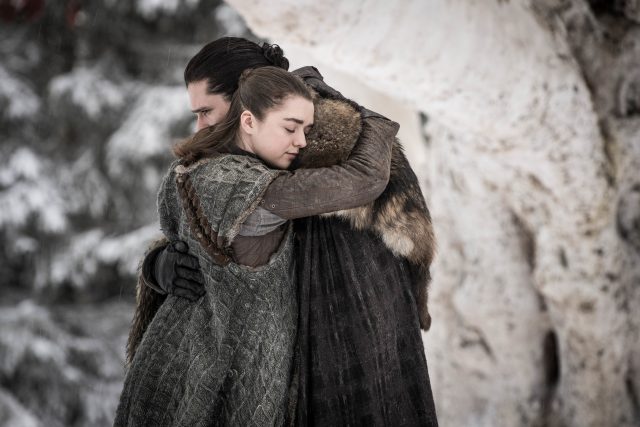 Other reunions included Jon and Bran, Arya and The Hound, Arya and Gendry (playful flirting much?), Tyrion and Sansa, Tormund and Dolorous Edd and of course, Jon and Sam, which brought about the biggest development of the episode - Jon now knows of his lineage and that he is the true heir to the Iron Throne.

This scene is also a callback to when Ned told Jon Snow that the next time he would see him he would tell him about his mother. Turned out, that was kind of true, as it was in front of Ned's grave in the crypt that Sam revealed that Jon was never a bastard. He is the son of Lyanna Stark and Rhaegar Targaryen, meaning his claim to the Iron Throne surpasses even Daenerys. This was of course already revealed to us in the season 7 finale, where Bran used his new time-travelling abilities to go back and see for himself that this happened.

Question is, what will Jon do with the new found knowledge? Go straight to his queen? Who is actually his aunt? It's no doubt a lot to take in but with only five episodes left, he would want to do it fast.

Jon also had his first ever spin on a dragon, which you would really think should be a glaring sign to Daenerys that there's a bang of Targaryen off Jon. This entire scene was fun but seemed a bit ridiculous - there's impending eternal doom on the way why not head off on a little dragon adventure? For a second, it looked like the pair of them were about to head into some waterfall cave, and I swear if he had betrayed Ygritte like that we would have been DONE. Move on it you want Jon, but love caves are for you and Ygritte only.

One of the best moments of the episode had to be Bran interrupting Daenerys and Jon's greetings with a "We don't have time for this", informing them the Night King is through The Wall and on the way, zombie dragon and all. Surely they should all be preparing for imminent battle rather than how to train your dragon classes?

Bran is as odd as ever of course, although he isn't Bran anymore as we all know, he's the Three-Eyed Raven. He spends most of the episode in the courtyard, saying at one point he is waiting for "an old friend". Turns out that old friend is no friend at all but his foe Jaime Lannister, the fella who pushed Bran out the window in the opening episode without a second thought, leaving him paralysed. Since then Bran has mastered his creepy dead-eye stare so it is Jaime who looks truly shook in this encounter.

Bran could be the least of his problems though, as Daenerys will also have a bone to pick with him over that whole murdering her father thing, him being the Kingslayer and all.

Then there's Sansa, dark horse Sansa, who Arya declares is the smartest person she has ever met. Great to see Arya having her sister's back but it's also an interesting statement, mainly because she is probably right. Sansa has undoubtedly suffered some of the most throughout the show, she was married to two of its most evil characters after all. She has also been around some of its most calculating, including Cersei and Littlefinger. Sansa is as tough as nails now and is clearly wise to a thing or two, mainly that Cersei clearly has no intention of bringing her army, admonishing Tyrion for even believing it. 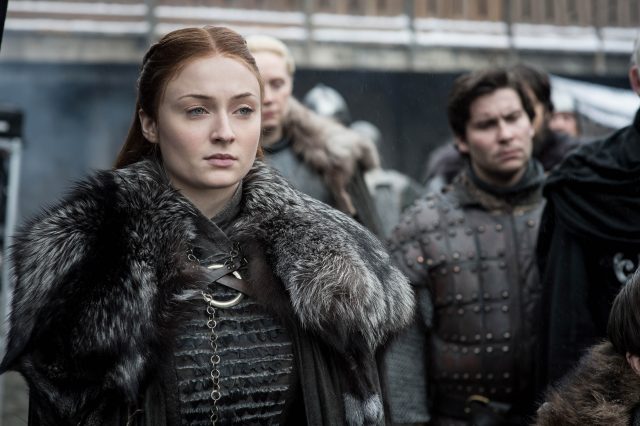 Cersei, meanwhile, was busy bedding Euron Greyjoy in Kingslanding, cursing her lack of elephants and sending Qyburn off with Joffrey's crossbow for Bronn to kill her bros with. He sums up all our thoughts will a roll of the eyes and a "That family". We are assuming given Bronn's history with the Lannister brothers that he won't carry this out and it will only serve as a catalyst to get him over to the right side, but this is 'Game of Thrones' where loyalties can be a fickle thing, so you never know.

Other notable moments in the episode were Theon following through with his rescuing Yara plan, who then condones him returning to Winterfell to fight with the Starks.

Daenerys got a dose of facing the consequences for her actions when she met Sam Tarly, the man who saved Jorah Mormont, and also the brother and son of the two men she executed back in season one. Awkward.

There was also the jump scare to end all jump scares as the body of Ned Umber opened his eyes and started screaming behind Tormund at Last Hearth. Jay. Sus. 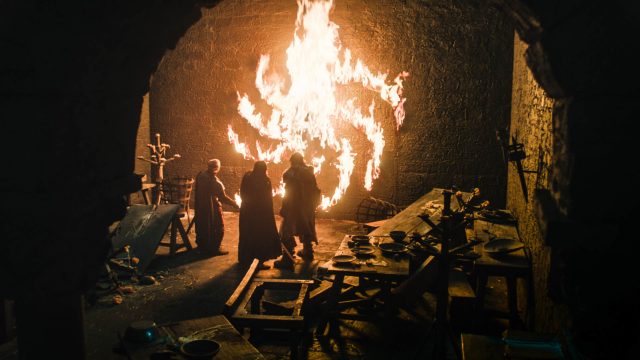 The symbol that was left on the wall is one we have seen often throughout the series when the Night King has been near, including, once again, in the opening episode.

The next stop for the White Walkers is Winterfell, although given that the main Battle of Winterfell is not set to take place until episode 3, we're assuming they will take their time. They're good like that.

A tip of our hat to those stunning opening credits too which underwent a complete transformation featuring the crypts of Winterfell and the Throne room at Kings Landing.

It's also worth noting it was actually quite a funny episode (screaming dead kids aside), with one-liners galore and plenty of witty exchanges. Perhaps some light levity for the sheer amount of deaths and darkness to come? We'd say they are lulling into us into a false sense of security but you know better by now. Winter is here, after all.

'Game of Thrones' drops teaser for next week's episode