A deep dive into the 'Game of Thrones' season 8 trailer

An (almost) shot by shot analysis

We were starting to wonder if there would ever be a 'Game of Thrones' season 8 trailer. In fact showrunners David Benioff and Dan Weiss had said before that they would have preferred not to do one. However, they thankfully gave in and provided us with two glorious minutes of new footage from the final ever season of 'Game of Thrones'.

No doubt you have watched it more than once at this stage, perhaps trying to work out what certain scenes might mean and the like. It has also been almost two years since we have had a new episode of 'Game of Thrones' so understandably you may be feeling a little rusty on what's going down in the Seven Kingdoms.

Yes, we all know the Night King is on the way, but you may have forgotten that Cersei also has The Golden Company en route to help her battle Daenerys and Jon Snow. That lady really needs to catch up - battling for the seven kingdoms is like, SO, five seasons ago. We're all about the Night King and his lads now.

There's plenty to unpack from this season 8 trailer though so get your, eh, goggles on because we are about to do some serious deep diving.

The opening scene kicks off with a petrified Arya running away from something, but what? Arya is not one to scare easily so something terrifying must be going down. She also looks quite bloodied up so perhaps this is during the Battle of Winterfell. It is also worth noting that despite extensive combat training, this will be Arya's very first battle, so understandably she may be a bit shaken up by it.... but still, that wouldn't be enough to rock our Arya... we dread to think. 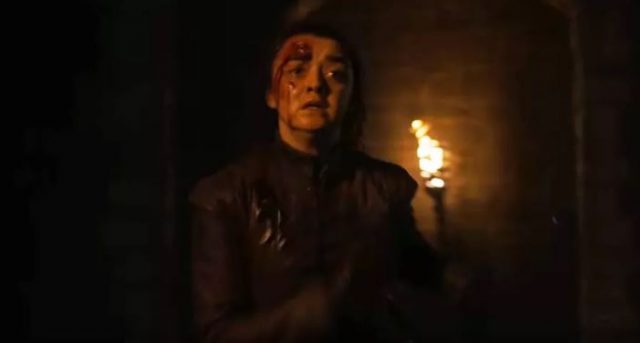 It then goes on to show a cleaned up Arya (which we assume is pre-whatever's happening above) brandishing some dragon glass, which, along with Valyrian steel, is the only thing that can kill the White Walkers, while a voiceover of her says: "I know death. He's got many faces. I look forward to seeing this one." She certainly doesn't look too excited above.

The next shot of note is of The Golden Company who are looking very golden indeed on board the Greyjoy ships. This lot are a sellswords company from Essos and are very impressive altogether - just look how shiny they are. They have a reputation of never breaking a contract, and their current one is with Euron Greyjoy who is set to bring them to King's Landing to help Cersei. The same Cersei who told Tyrion that she was happy to call a ceasefire considering the impending threats ahead. It was this decision to go back on her word that sent Jaime heading for the hills. 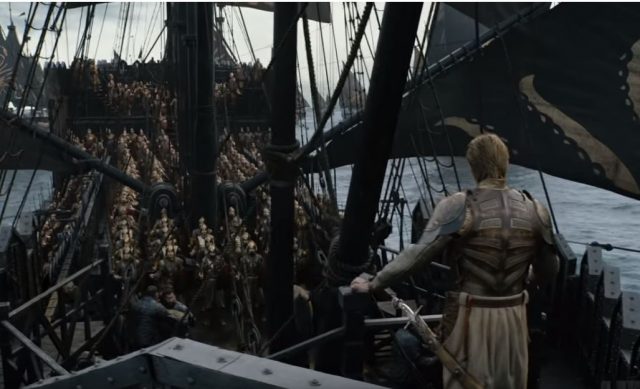 They're alive!! We didn't doubt it really but they were in quite a precarious position when the Night King was blowing the wall to pieces in the season 7 finale. 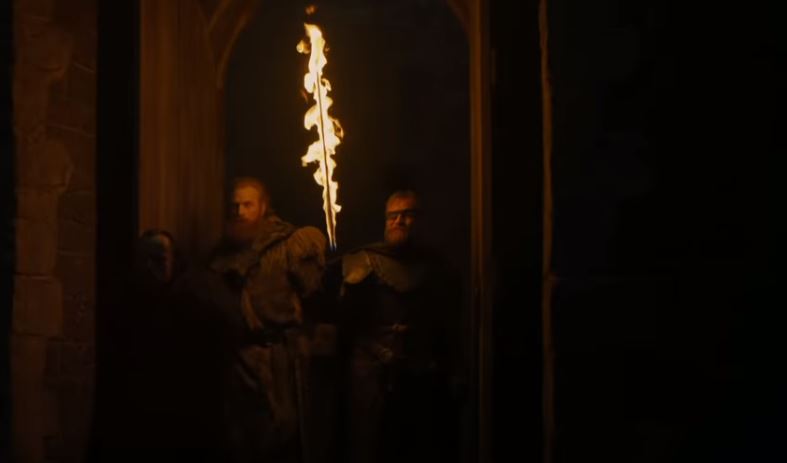 We then have a voiceover of Winterfell's resident psychic Bran saying: "Everything you did brought you where you are now. Home." Perhaps talking to older half-bro Jon in their impending reunion.

There's then a shot of him and Sam, who we know are the only two who know that Jon was not Ned's son, but Rhaegar Targaryen and Lyanna Stark's - meaning that our Jon is the legit real heir to the Iron Throne, surpassing even Daenery's claim.

He's also banging his aunt. Awks when that one comes out. 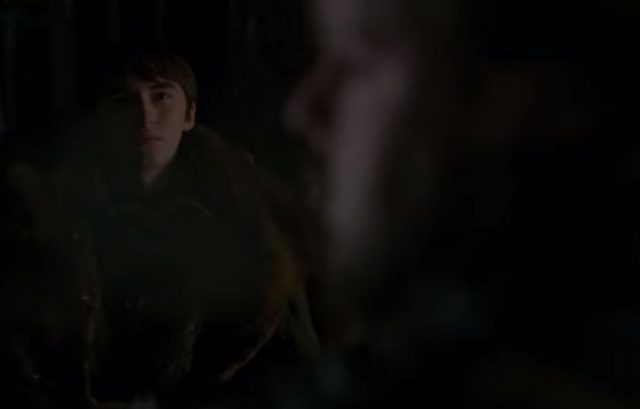 These two have got off their love boat and are now Winterfell bound with the Unsullied and Dothraki armies in tow. This, we know already, is the first scene of season eight. 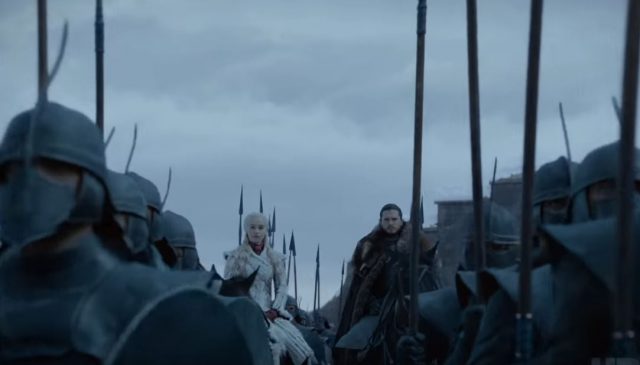 We then get a glorious shot of Sansa seeing a dragon for the first time and then it's straight into the Winterfell crypt where Jon Snow is standing with Daeny joining him. His look of sadness could mean he now knows the truth of his parentage or maybe he is paying respect to all the family members he has lost since this whole shindig kicked off eight seasons ago. Let's just hope the Night King doesn't find that crypt, although nobody's denying how deadly a zombie Ned Stark would be. Wait, is that what Arya is running from?? IS THAT WHAT SHE IS RUNNING FROM?! Okay, we've probably gone too far. 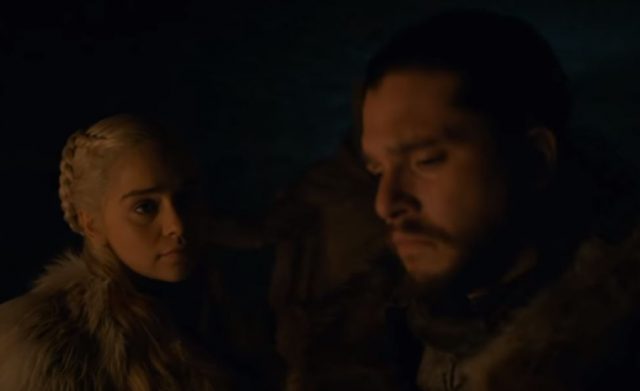 Gendry and the Valyrian steel

As we said earlier, it's only dragon glass and Valyrian Steel that can kill White Walkers. We are assuming skilled blacksmith Gendry is heading up a weapon building work shop to fight the army of the dead here. 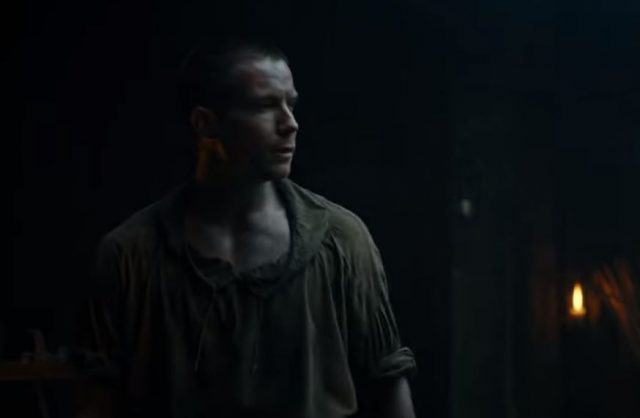 Then it's back to Cersei in her throne room and onto a frankly exquisite shot of her drinking a glass of wine that seems to show sadness, happiness and regret in a look only Lena Headey could do. But if she's drinking wine, are we to assume she's had a miscarriage.. or was there ever a baby? Hmmm.

We then have a shot of Arya seeing a dragon for the first time (but we have seen that already in a blink-and-you'll-miss-it HBO trailer), Jon Snow at the heart tree at Winterfell having another wee think, and then The Hound next to fire which we know he is really not a big fan of. 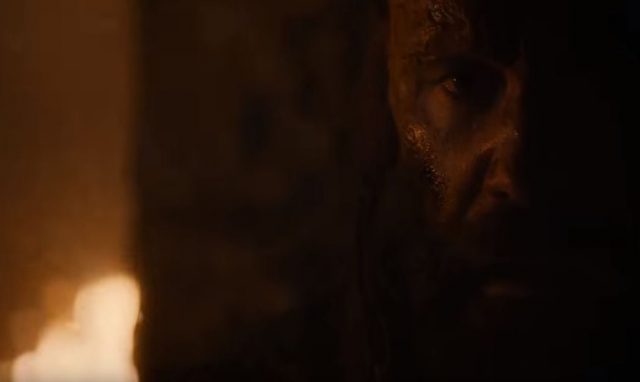 The Battle of Winterfell

We then have quite a few battle shots to take in - Ser Jorah on horseback, a passionate kiss between Grey Worm and Missandei and Jaime Lannister frankly giving it SOCKS. 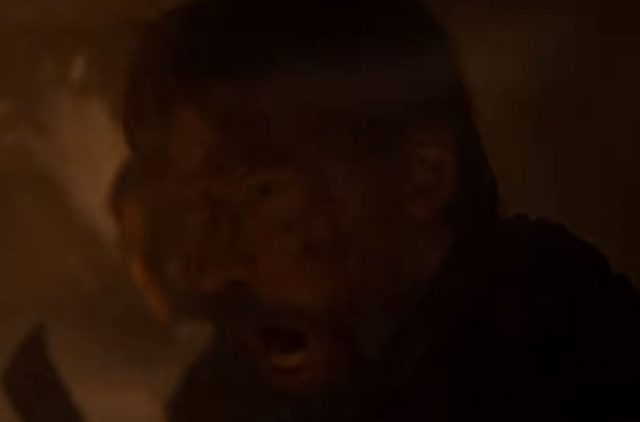 We also see Jon Snow in the height of battle and fleeing with everyone into Winterfell castle, which leads to a conclusion you won't like but deep down know already: They aren't going to win the Battle of Winterfell.

And a there are going to be a LOT of character deaths to cope with in that episode.

Never fear though, all is not lost for the Seven Kingdoms as this trailer is likely only showing footage from the first few episodes, with the Winterfell battle set to place in episode 3. Director Miguel Sapochnik, who has done all the amazing battle scenes on the show including 'Hardhome' and 'The Battle of the Bastards' also directs episode 5 of season 8. In summary, there's a lot more fighting to come beyond this trailer.

Jon Snow and the dragons

Another very interesting piece of footage is Jon Snow and Daenerys with the two dragons (who have a LOT of bones around them). Could Jon be about to get on board a dragon for the first time? Given his Targaryen blood, they'd certainly be happy to have him. 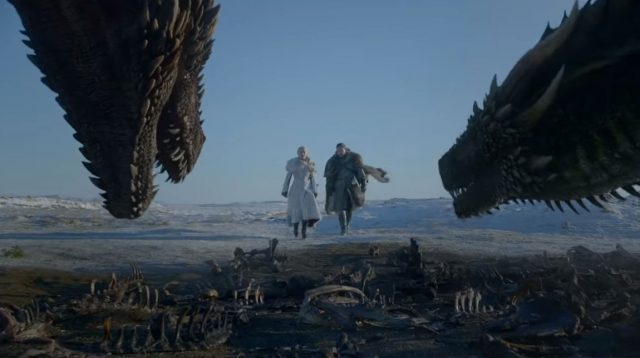 There's then a lot of contemplative shots and our first and only look of Tyrion Lannister who seems to be in a slightly warmer climate. Although he was bound for Winterfell when we last saw him... perhaps he decides to head back to King's Landing when he realises Cersei has double backed on her decision? 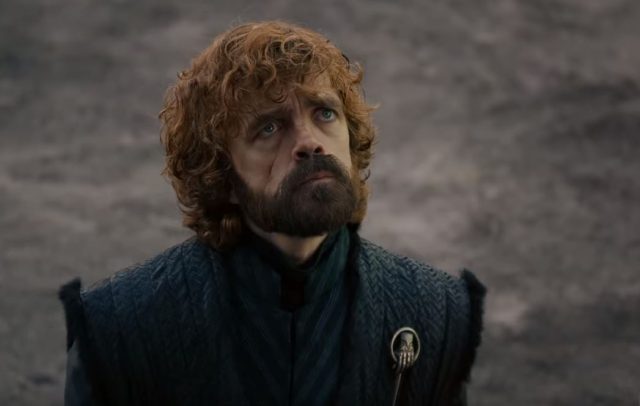 The final moments are given to the army of the living all lined out to fight, with one chilling shot of the legs of the Night King's horse and the lights of Winterfell in the not-so-far distance. 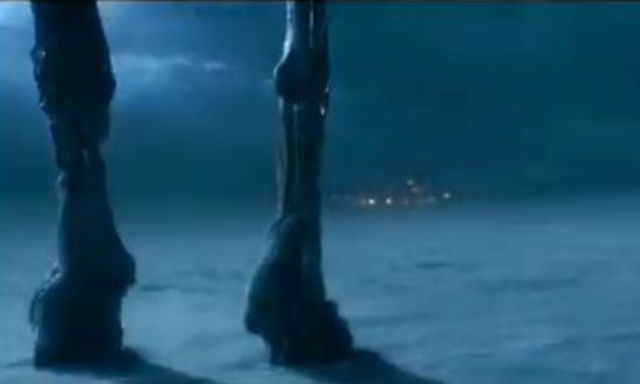 Question is, where, pray tell, is his new ride AKA zombie dragon? Or is that one of the Night King's foot soldiers and he's off on an attack elsewhere?

T minus 40 days until we find out.