Season 3 of 'True Detective' did not let down

The finale of 'True Detective' proved it was worth sticking around for - dare we say it was better than season one? It certainly didn't let down. It was a season that required patience and a keen-eye for detail, but the drip-feeding of information over the course of the eight episodes meant that the explanation was there before us the entire time, but like Hays and Roland, we were just too close to see it.

This, you might imagine, was Nic Pizzolatto's aim - to not only show you the horror of a case like this but also to depict the collateral damage it does to those around it. That there are real life consequence to the true crime stories we obsess on so much these days.

As much as there were all sorts of red herrings and conspiracy theories over what might have happened to the Purcell children, the explanation was almost heartbreakingly simple. There was no paedophile ring, no evil serial killer; what we had was a very troubled woman who was enabled by those around her to destroy a young girl's childhood.

A visit to Junius Watts in 2015 (aka the one eyed man) cleared up all of the final details. Isabel Hoyt, bereaved of her own family, became enamoured with Julie Purcell because of how alike her own daughter she was. Play dates were arranged with the consent of Lucy Purcell but on one particular day - that fateful day in the woods in 1980 - when Isabel was "not herself", an accident led to Will's death. Harris James, as we already knew, was involved in the cover-up and was the one who paid Lucy Purcell off for the adoption of Julie, leaving poor Tom to a lifetime of suffering.

Watts ultimately helped Julie to escape, and only tracked her down in 1997 in a convent where it emerged that 'Mary July', as Julie went by then, had died two years previous with HIV. The story leads Hays and Roland to her grave where they pay their respects and apologise for letting her down. No punishment or retribution for anyone was necessary, the damage has already long been done and the answers only served as a reminder of that rather than bring any closure.

Did you know Meryl Streep's daughter is in 'True Detective'?

The twist of the story came when the former detectives spotted a little girl called Lucy in the gardens of the convent with her father, a gardener called Mike. You may have started to join the dots there and then, but just in case you hadn't, the ghost of Amelia was later on hand to explain it to Hays. He found himself on a trip out to their house, only for his illness to set in when he arrived and he suddenly had no idea why he was there. We did though, and seeing that Julie Purcell was alive and well and happy, was about as uplifting an ending we've ever had on 'True Detective'. (As long as Hays junior keeps that address to himself...)

The case and its entanglements in the relationship of Wayne and Amelia was always a huge aspect to this season and the finale also served to give them a happy ending of sorts. Their tumultuous relationship was there from the get-go it seems with what was a very embittered row between the pair in 1980 in the aftermath of Hays' demotion. It did lead to a proposal however, with Hays confessing: "I think I want to marry you. I didn’t think that’d happen for me. I didn’t let myself… I didn’t expect this. You." 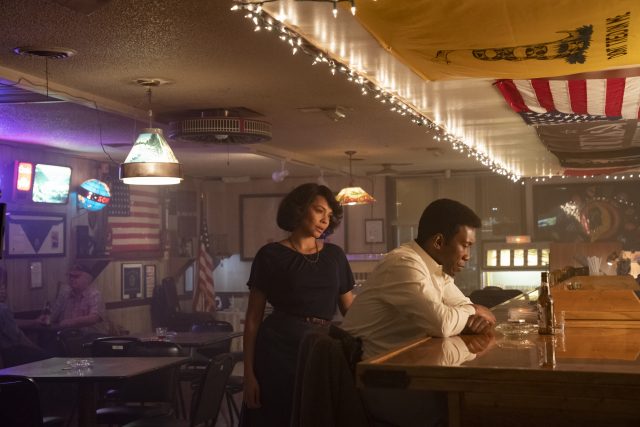 In 1990 then, the couple were working their way through 10 years of problems which all came down to their mutual obsession with the Purcell case. They struck an agreement - to leave the case and all it entailed behind them once and for all. And it worked too, as we knew from the opening of the episode when we were once again taken to a new timeline somewhere between 1990 and 2015. The way they looked at each other then was enough to show that they did get past their troubles and their relationship survived. That - like Julie Purcell - they were able to let go of the past and find happiness.

And Roland? Well, Roland has his dogs. His happy ending unfortunately comes much later as he takes himself out of isolation to spend time with Hays and his family, and ultimately gets some answers to the case that haunted him too over the years. The relationship between Hays and Roland was one of the most compelling aspects of the entire series, and Mahershala Ali and Stephen Dorff paced along with each other perfectly throughout delivering complex, layered performances. That hug felt both heartwarming and earned.

It was just another example of breaking down of walls that happened in this episode, both emotionally and literally. The bleeding of timelines into each other reached their height with the refection of Hays and Roland's younger selves in the mirror at the Hoyt house and a terrific scene in the car as they morphed in and out of their different ages. How Pizzolatto so elegantly played with time in this series is unlike anything that's gone before. It surpassed his use of it in season one as it was no longer just a plot device to retrospectively look back, but to further expand the theme that our memories and the key moments of our life don't have a beginning or an end but co-exist with us - I'm beginning to sound like Rust Cohle now so will leave you with the knowledge that 'True Detective' season 3 is storytelling at its finest with the kind of engrossing performances that raise the bar for what can be achieved, not just on TV, but on screen overall.

Review: Episode 6 - 'Hunters In The Dark'

Review: Episode 5 - 'If You Have Ghosts'

Channel 4 will release a Caroline Flack documentary next month