With just two episodes left, the story is now really beginning to take shape - and it's as grim as ever.

What made 'True Detective' so compelling in its first season, and was subsequently lost in its second, is the idea of an investigation leading to something that doesn't resemble justice.

Think of any regular crime procedural. 'Law & Order'. 'Criminal Minds'. Hell, go back as far as 'Ironside' or something like that. The idea is that the case unfolds, witnesses are sought, conclusions are drawn to fit the evidence, and the perpetrator is brought down.

'True Detective' was never like that. The idea was that "time was a flat circle", that there was no justice to be found because the cycle of abuse and horror would repeat itself again. Maybe not with those children, but some others. The third season of 'True Detective' understands this idea of existential dread, but it doesn't have the same vibes of Southern gothic that the first season.

'Hunters In The Dark' opens with Tom Purcell (Scoot McNairy) in 1990 angrily denying that he had anything to do with his daughter's disappearance, and is unable to offer any explanation as to why she doesn't want to see him. We know that the phone call was genuine, that it really was her, and more importantly, that the attorney general and the new investigation want to indict him. 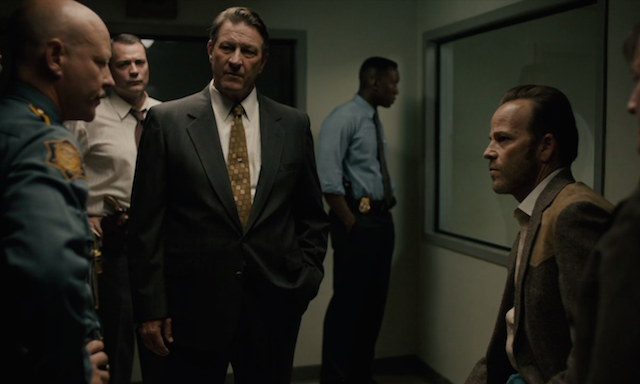 Hays, it seems, doesn't fully believe that Tom is innocent, whereas West refuses to even countenance a doubt in his story - not even when they're confronted with evidence that Tom is a closeted homosexual.

When Tom is released - seemingly out of nowhere - from the jail, he means to confront Hays and West, but soon learns that Dan O'Brien, the suspicious brother-in-law, is striking a deal with them for information in exchange for money. After he angrily confronts Dan, we learn that his promise of telling Hays and West the full story was - as you'd expect - an exaggeration. All he had was the name of the person who was feeding Lucy Purcell money after the supposed deaths of her children. Whether Tom ended up killing him, or if he died at someone else's hands is - at this moment - irrelevant.

Let's look at Harris James, the creepy AF police officer who almost certainly planted the red bag at Woodard's house after he went berserk and killed so many people. Before, one might have guessed that the Attorney General and the powers that be in the police department were complicit in covering this all up and maybe even were involved in it somehow, but now it seems that pinning it all on Woodard was simply a case of finding the easiest route possible to completing the case. Harris James, as we find out in 1990, is now the Chief of Security for the all-powerful Mr. Hoyt of Hoyt Farms. 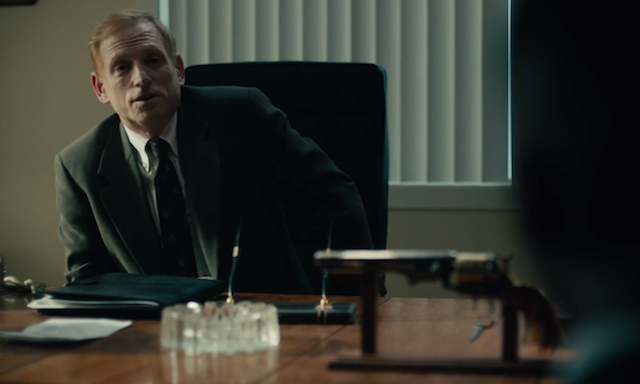 When Harris James was first introduced, there was a feeling that he might have been a red herring - that it was just too obvious that he be involved in all of this, that he was just a bit of misdirection and the Hoyt Farms connection was the same. The final moments, however, make it clear that the connection is not only real, but the recurring mention of 'the pink rooms' wasn't just a figment of Julie Purcell's imagination - but was an actual place where the episode ends, with Tom seeing something - and Harris James appearing behind him.

It's a great way to end the episode, and with just two episodes left, the season is driving towards its conclusion with some speed.

'Hunters In The Dark' answered a lot of questions, much like last week's episode. The peephole in the Purcell's house has been conclusively dismissed, and so to has Dan O'Brien as a suspect. Lucy Purcell's death by overdose, which was suspicious by itself, now seems almost certainly have been a murder to keep her quiet. Did she, in fact, know what happened to Lucy? Did she write the ransom note, as Hays seems to think in 2015?

We know that Lucy worked at Hoyt Farms, and that Harris James knew of her. We know from this episode that, yes, Julie Purcell was held in the 'pink room' underneath Mr. Hoyt's house. Did Lucy sell her daughter to Mr. Hoyt? Did she also murder Will Purcell? As Hays says when questioned by the documentary director in 2015, what we just did was "speculation - which leads to projection, we call it. Twists what you see, obfuscates the truth."

If the truth is coming, will it lead to justice? Or can you even hope to get justice when it's something as messed up as this?

Review: Episode 5 - 'If You Have Ghosts'