If you Google 'bad writers', you now get the writers from 'Game of Thrones'

Although you might not realise it, it's relatively easy to manipulate Google's search results.

The term is called SEO, or Search Engine Optimisation. It's why when you type in 'cinema ireland' or 'tv listings ireland', we almost always come up as the first search result.

While most outlets, companies and the like use it to promote their business, disgruntled fans of 'Game of Thrones' used it for another reason altogether. If you now go on to Google and type the term 'bad writers', you'll be presented with an image of Dan Weiss and David Benioff, the showrunners of 'Game of Thrones'.

And just to prove our point, here's a screenshot we took earlier. 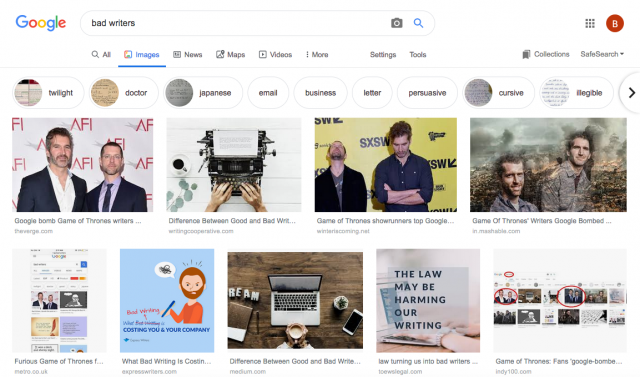 Go on, check it now if you don't believe us.

So, are they actually bad writers? Well, the evidence is all there on the screen, depending on who you ask. For one, the final season of 'Game of Thrones' had the worst critical reviews in the show's entire run.

Not only that, one or two of the cast themselves have been somewhat vocal about their displeasure with how the final season eventually played out. To top that all, you've also got pretty much every who saw the thing saying the same thing - namely, that the final season was a rush-job and didn't come close to being the kind of ending a show liked that deserved.

Hell, here's Jon Hamm talking about how badly the ending was handled and he wasn't even in that show. He was talking about in context of 'Mad Men' and how well that show ended.

So, yeah, maybe Google's right on this one for a change.

Season two of 'The White Lotus' will be set in Sicily