'Friends' star David Schwimmer has been ever so carefully moving away from his iconic role on the hit show. In recent years, he has made some interesting choices that have been paying off for him, from his role as Robert Kardashian in 'American Crime Story' to his recent turn in 'Will and Grace'. We're almost starting to not see Ross Gellar when we look at him. Almost.

Now he's got another juicy new role coming up and will be seeing how he fares in a British comedy. Sky's new show 'Intelligence' is created and written by Nick Mohammed, who also co-stars. It's a workplace comedy set in the UK’s GCHQ, described as a kind of weedier, geekier version of MI5, where they tackle international and domestic Cyber Crime from a desktop.

Schwimmer is set to play an arrogant, maverick NSA agent called Jerry who comes over from the U.S. to join the team. He enlists an inept and tactless computer analyst Joseph (Nick Mohammed) in a power grab that threatens to disrupt the team’s ability to combat cyber terrorism.

Sky has released a first-look image from the show, along with some very tongue-in-cheek statements from Schwimmer, who also executive produces, and Mohammed. 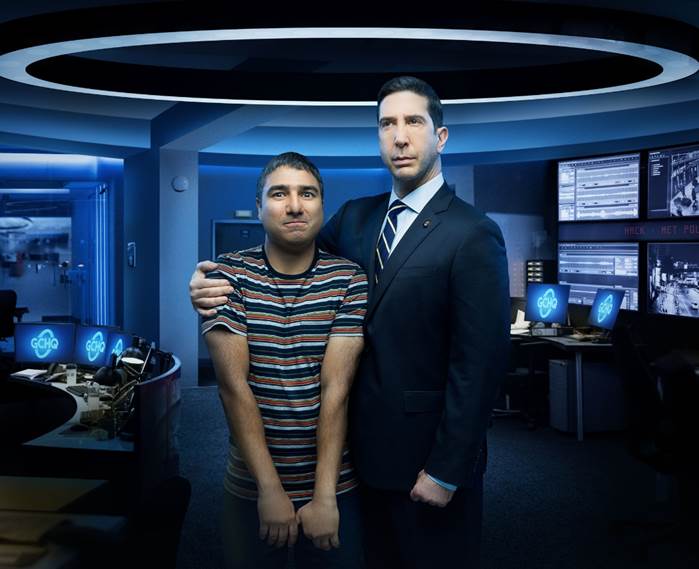 David Schwimmer said: "I think you'll find this is the best TV comedy made in the last two hundred years. You can't see my face, but I'm super serious."

Nick Mohammed said: “Given that David is most well-known for his dramatic roles, it’s nice to see him finally have a go at comedy. Hopefully, it’ll lead to more work of this quality”

While Jon Mountague, Sky Studios Director of Comedy, said: “Intelligence is an absolute peach of a show; genuinely juicy, truly funny and shot through with a chemistry that won’t be top secret for long. Forget Harry and Meghan, David and Nick’s is an Anglo-American relationship for our times. 2020 is going to be an even bigger year for Sky original comedies on Sky One - and they don’t come much more special than this.”

The 6 episode 30-minute Sky original series is due to air on Sky One and streaming service NOW TV on 21st February.