Could there BE any less continuity?

It's 25 years since 'Friends' premiered but it remains one of TV's most-watched and talked about shows (although not always for positive reasons). This means that eagle-eyed viewers are consistently spotting mistakes and continuity errors on the show.

Some are down to the fact that 'Friends' was filmed in the '90s when TV shows were shot in the standard 4:3. aspect ratio. If you are now watching the show on Netflix, you will be viewing it the wider aspect ratio of 16:9, meaning Todd the cameraman can sometimes appear in shot.

The rest of them however, are just down to somebody dropping the ball.

A new study by MyLotto24 from data collated from moviemistakes.com has revealed that 'Friends' has more mistakes per season (149) than any TV show in history, beating 'Buffy The Vampire Slayer' (90) and 'Red Dwarf' (81).

Take a look at some of the most obvious mistakes from 'Friends' below:

1. The one with the vanishing necklace - season 2, episode 7

Rachel finds out that Ross and Julie are getting a cat. At first when Rachel says "Together?" she is not wearing a necklace. When the camera cuts back to her saying "Both of you?" she is suddenly wearing a necklace. It then disappears again when she says "Isn't that just lovely?" 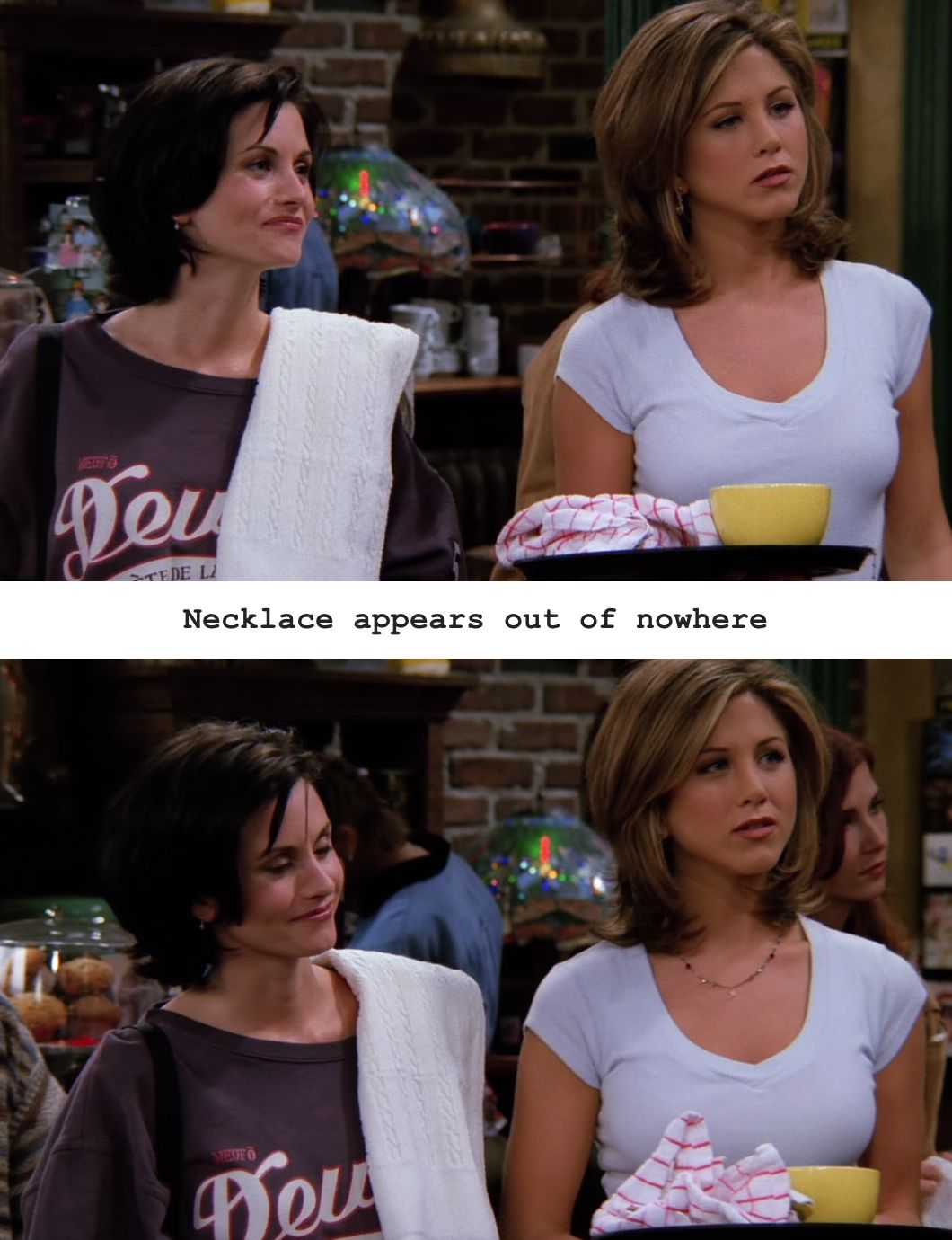 Phoebe is talking to Monica in the coffee house, who is drinking a cup of coffee. The camera is on Phoebe, and on the right-hand side of the screen is a side view of Monica. However, it is not Courteney Cox that we see, but an entirely different actor altogether. 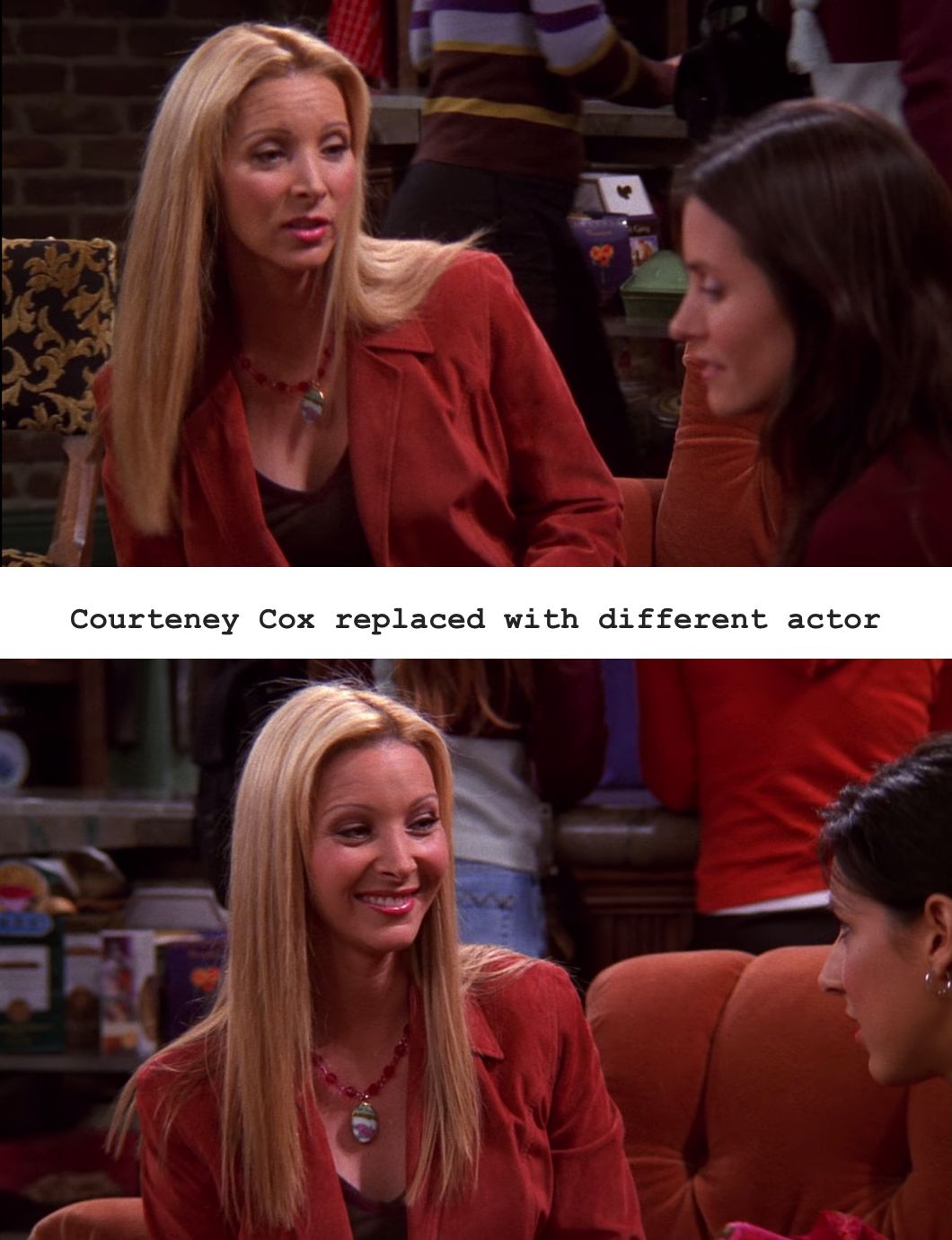 Joey is wearing a black top with a zip as he counts the floors of Ross's building to work out where the attractive girl lives. When he enters Ross's building and knocks on what he believes to be the girl's front door, he is wearing a dark purple buttoned shirt. As soon as Ross answers the door however, Joey is wearing the black zip-up top again. Got cold on the way up perhaps? 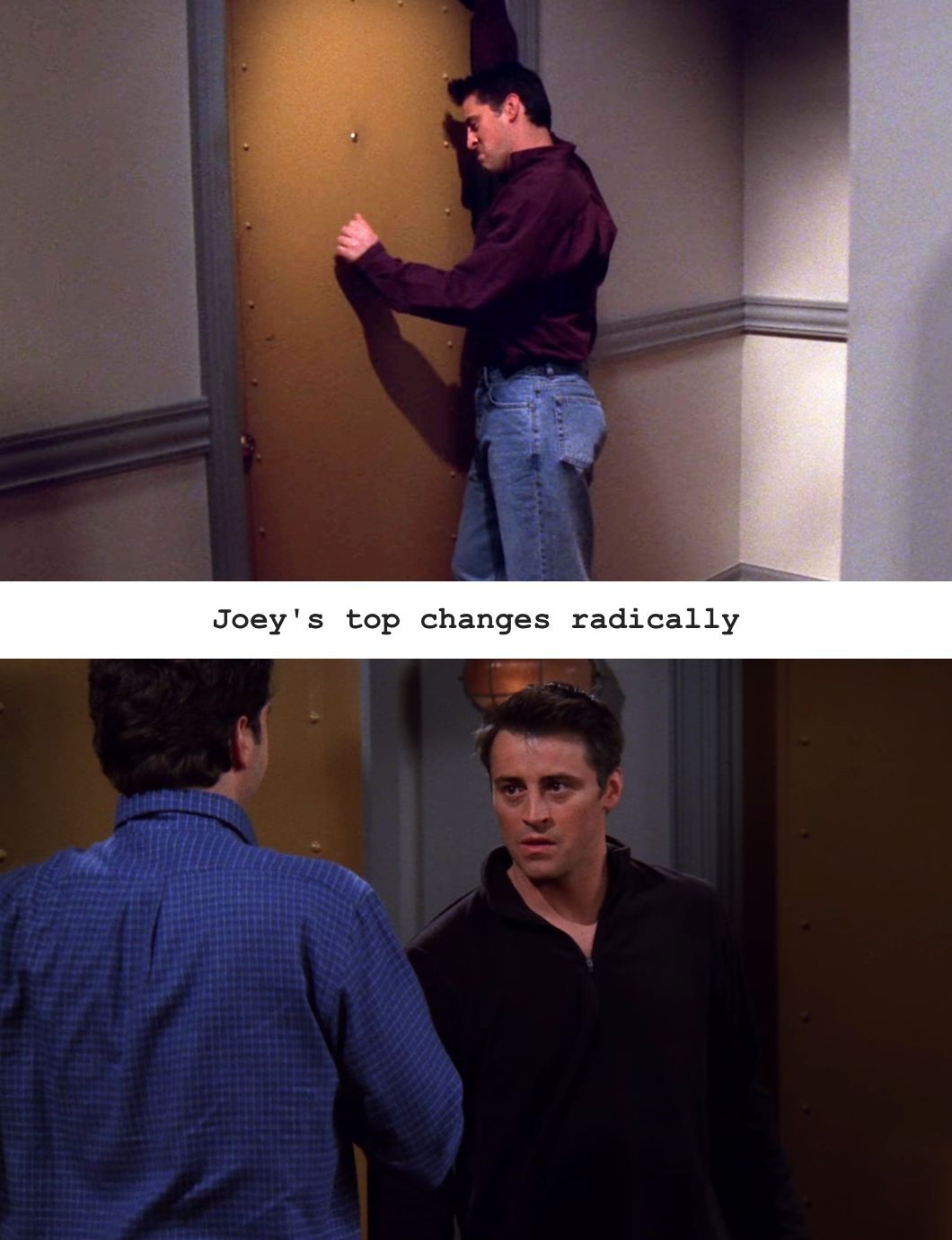 Joey goes to Monica and Chandler's apartment to get something to drink for the audition. When he closes the fridge he has two bottles in his left hand. When the camera cuts back to him later in the scene, he has two cans in his left hand and is holding them differently. 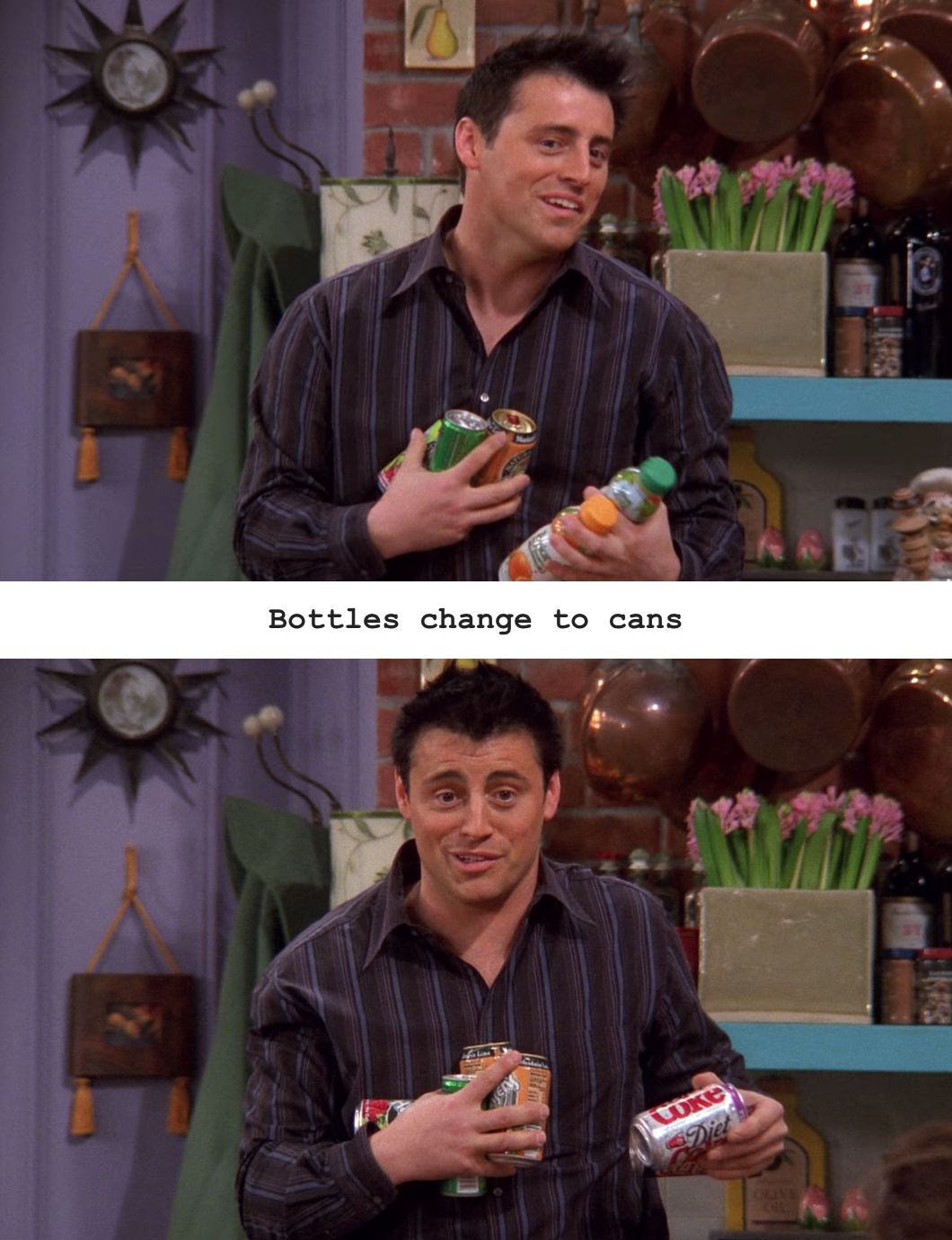 5.  The one with the self-wrapping present - season 8, episode 2

Monica is sitting in the living room with her wedding presents. She unwraps a large parcel to reveal a brown cardboard box. The camera moves to Joey, and when it moves back to Monica, the parcel is wrapped up again. If only our Christmas pressies could get wrapped so quick. 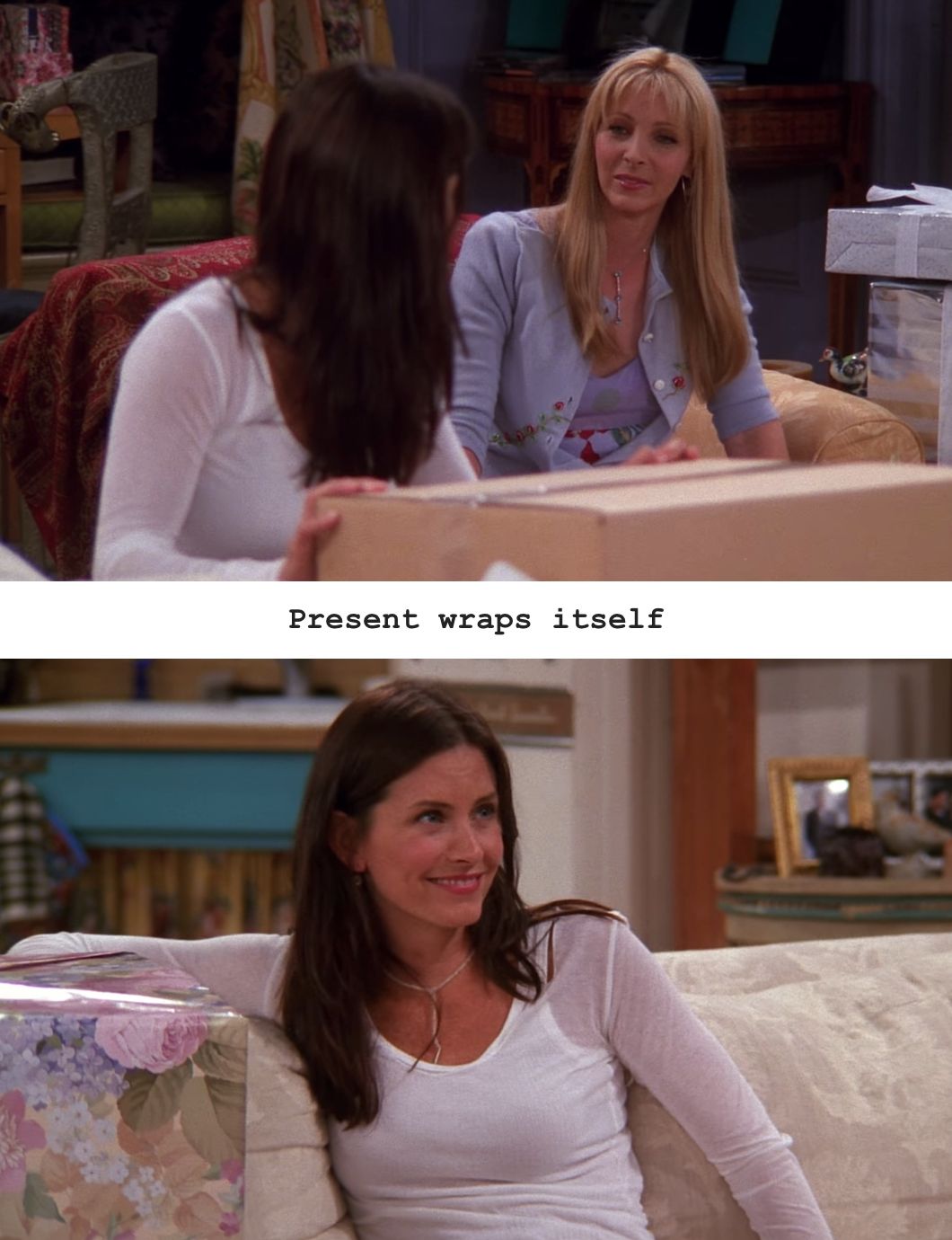 Some extras can be seen behind Ross and Phoebe in JFK Airport when Phoebe claims they are on their honeymoon. When the camera cuts to Rachel at Newark Airport as she's looking for her boarding pass, those same people are there too. We are on to you bandana lady. 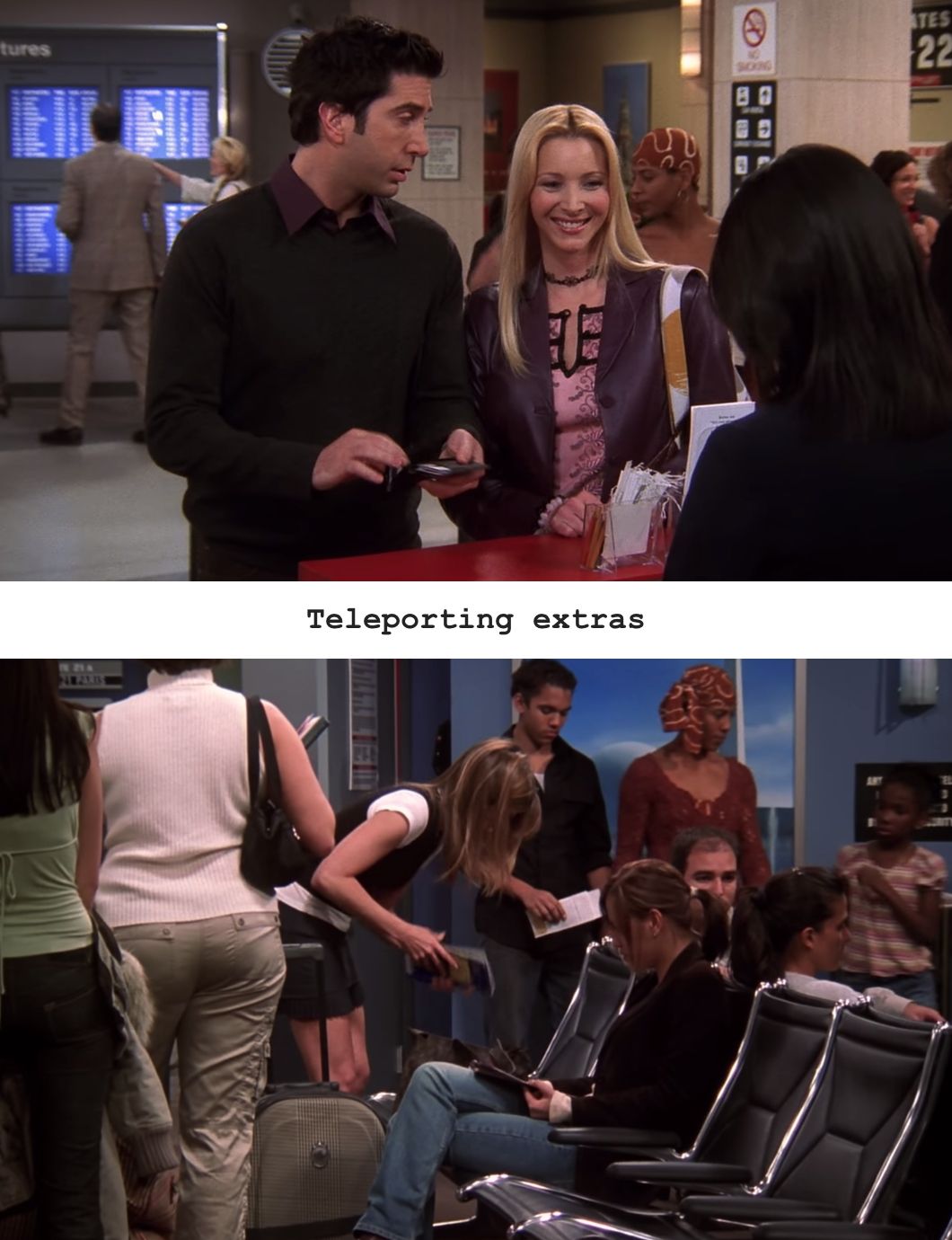 Ross comes to Chandler and Joey's apartment to ask what the guys are doing in four weeks. The Magna Doodle behind Ross at first says "poop", then is blank. The camera cuts to Joey checking his diary and back to Ross. The Magna Doodle now reads "get out". Spooky.... 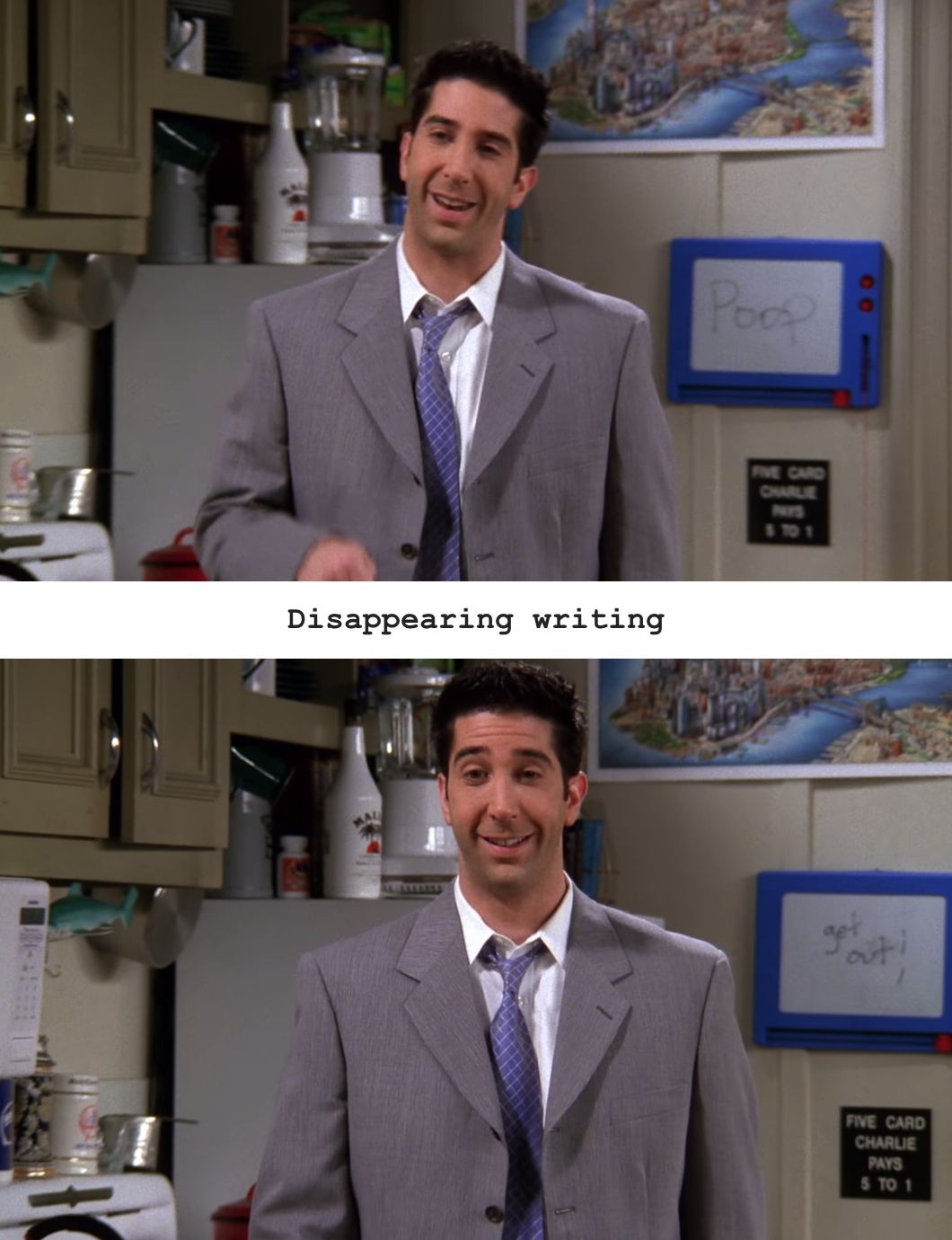 Joey tells Chandler about his identical hand twin and plans for getting rich. When he sees Chandler's reaction, Joey points accusingly at Chandler with his left arm. In the next shot, he can be seen pointing with his right arm. 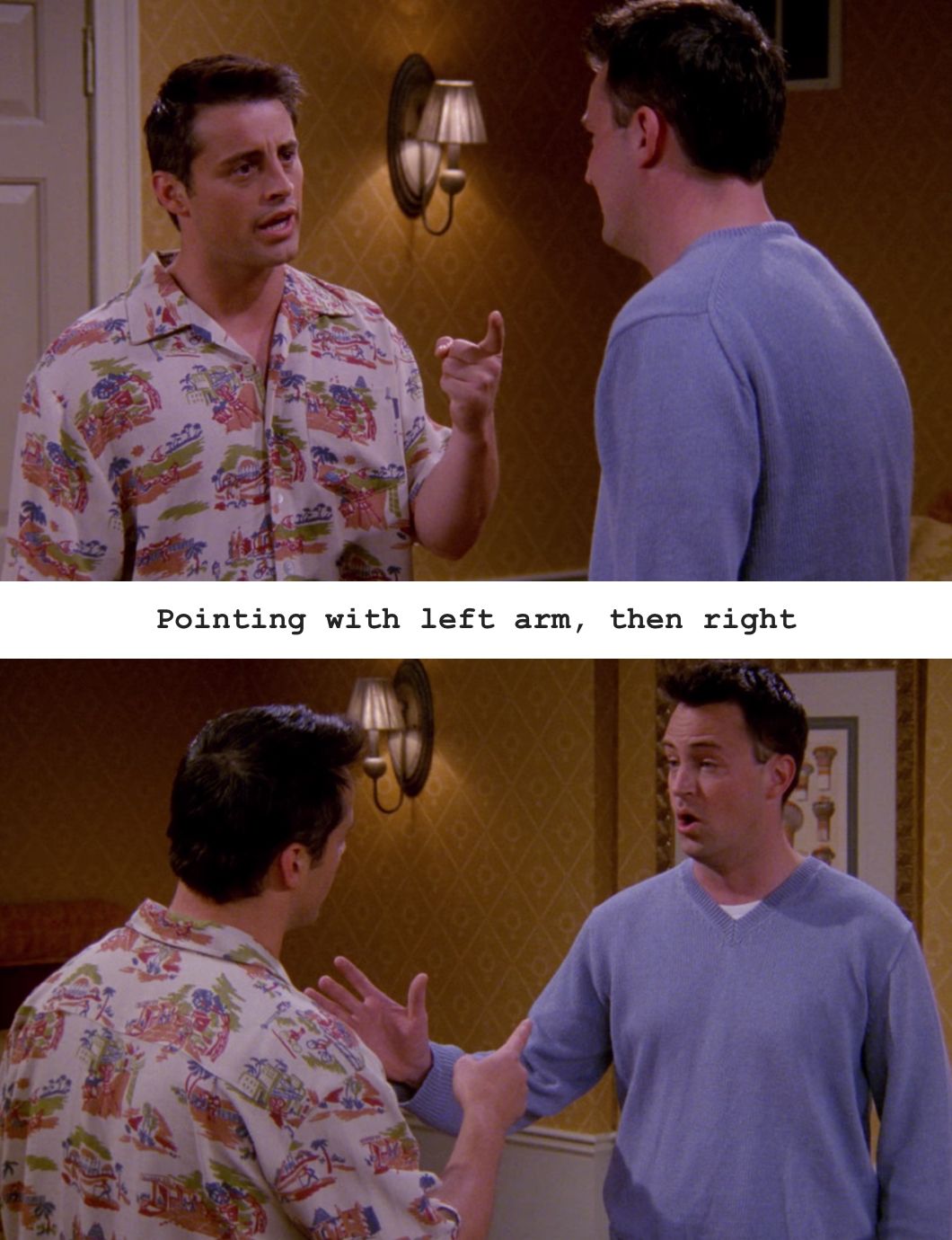 Ross can be seen wearing a foam finger at the hockey game, which later disappears. Although he may have just put it down, in fairness. 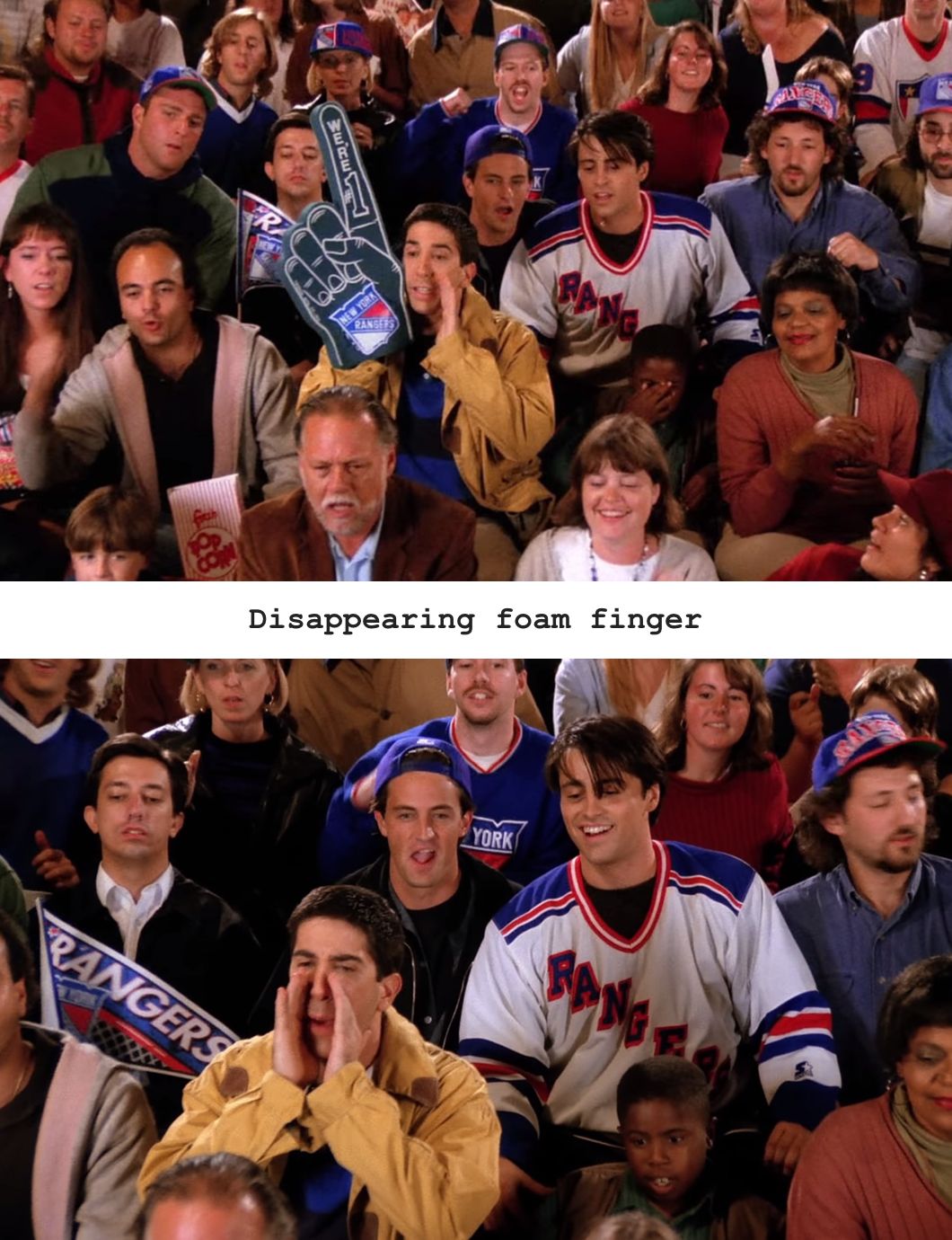 Finally, Rachel is wearing a paisley top when she tells Joey that his agent called to say he got the audition for the Broadway play. In the next shot, Jennifer Aniston's stand-in can be seen standing beside Joey wearing a different top. 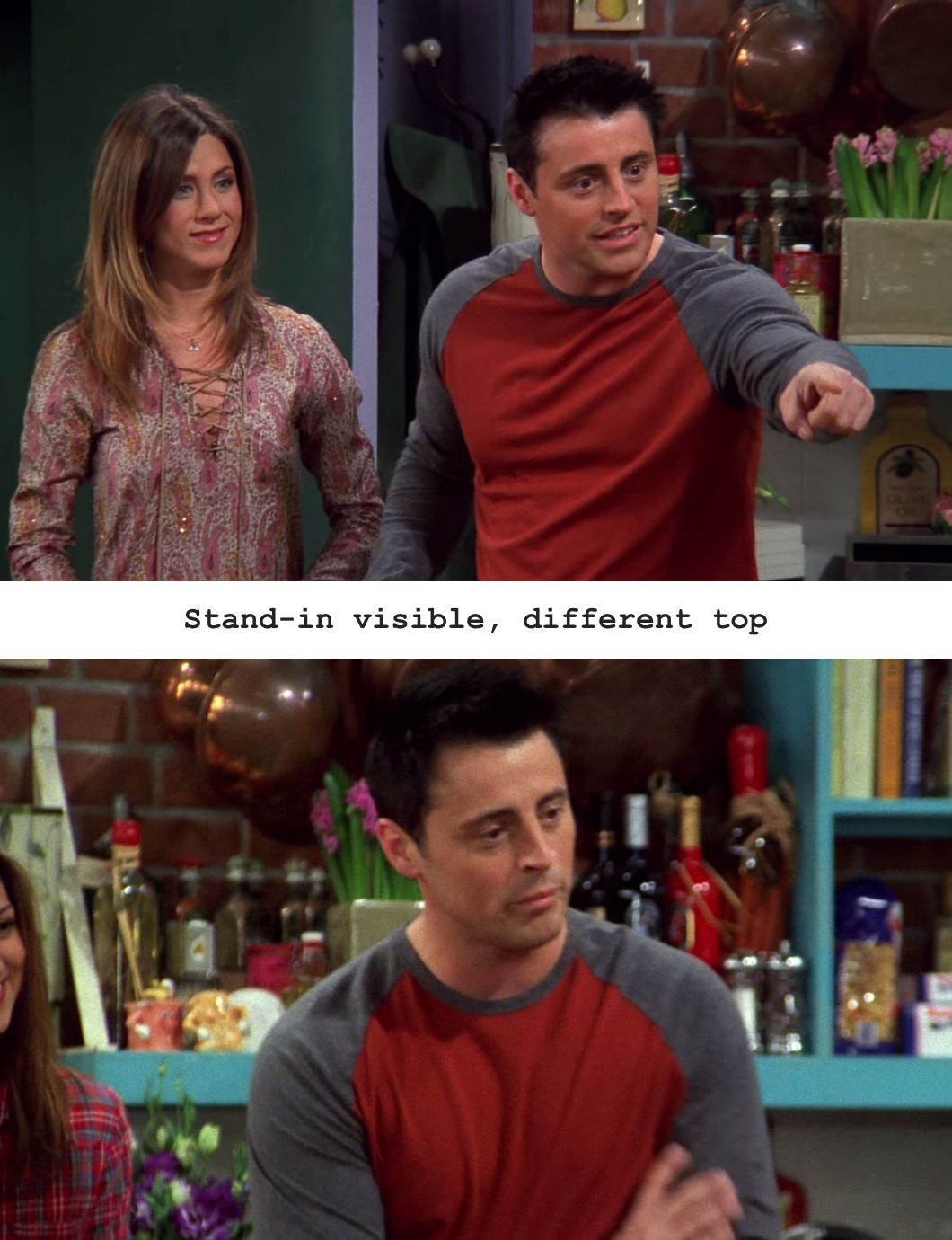