The ad gave a shout-out to the Gamestop stocks saga

Reddit posted a very cheeky advertisement during the Super Bowl last night. It was only 5 seconds long, so a lot of viewers missed it.

In case you haven't heard, Reddit have been making waves of late in the world of business and Wall Street.

In essence, members of the subreddit r/wallstreetbets managed to drive up the price of GameStop (and cinema chain AMC) through short squeezing hedge funds.

The movement has inspired memes and even a movie.

Reddit gave a shout-out to those ambitious followers in its ad, which you can watch below.

Missed it? No worries, here's the text in full:

"If you’re reading this, it means our bet paid off.

"Big game spots are expensive, so we couldn’t buy a full one. But we were inspired and decided to spend our entire marketing budget on 5 seconds of airtime. One thing we learned from our communities last week is that underdogs can accomplish anything when they come together around a common idea.

"Who knows, maybe you’ll be the reason finance textbooks have to add a chapter on “tendies.” Maybe you’ll help r/SuperbOwl teach the world about the majesty of owls. Maybe you’ll even pause this 5-second ad.

"Powerful things happen when people rally around something they really care about. And there’s a place for that. It’s called Reddit." 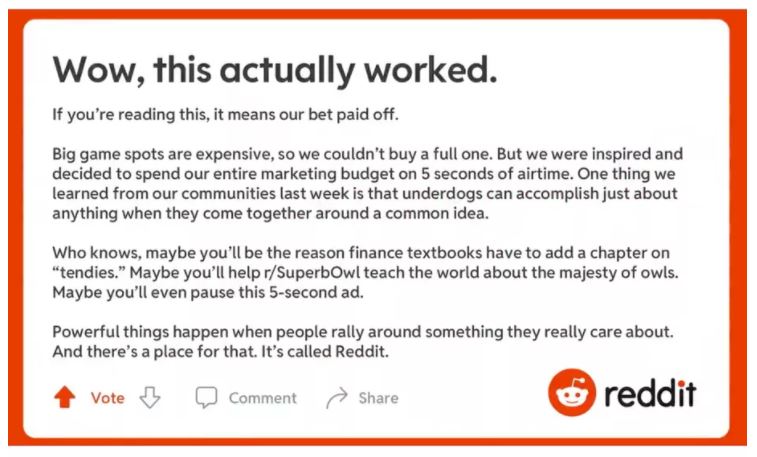