It seems that Kim and Kanye aren't the only couple living out their relationship problems on Twitter lately.

Musician Grimes has taken her partner Elon Musk to task in a very public manner after he tweeted - apparently apropos of nothing - 'Pronouns suck' the other day.

In a since-deleted tweet, the Canadian art-pop star posted just minutes after the tweet, saying "I love you but please turn off ur phone or give me a dall. I cannot support hate. Please stop this. I know this isn’t your heart. [sic]” 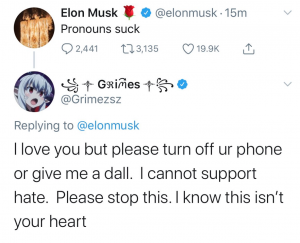 Musk was in the news last week after an interview with The New York Times, in which he spoke about Grimes - who recently gave birth to their first child together. He called her "pretty special" and"one of the most unusual people I’ve ever met."

He also spoke about his role in their son's upbringing, saying "Well, babies are just eating and pooping machines, you know? Right now there’s not much I can do. Grimes has a much bigger role than me right now. When the kid gets older, there will be more of a role for me.

"I think just doing what I’ve done with my other kids. If I have a trip for Tesla to China, for example, I’ll bring the kids with me and we’ll go see the Great Wall or we took the bullet train from Beijing to Xian and saw the Terracotta Warriors.”

Grimes had previously spoken of her desire to raise their child as gender-neutral - but Musk put paid to that by referring to the child as 'he' just hours after the birth on Twitter.

Musk has been tweeting regularly following the 'pronouns' tweet, but Grimes has not tweeted since.