Netflix review: 'The SpongeBob Movie: Sponge on the Run' is good, silly fun

Lord knows we could use a little silliness right now

Originally set for movie release last summer, but due to COVID, has gone straight to Netflix, all the gang - Spongebob Squarepants, Patrick, Sandy, Squidward, Mr. Krabs, and even Plankton - are back in the latest Spongebob movie. When King Poseidon snail-naps Gary, Spongebob's pet snail, Spongebob and Patrick set off for the Lost City of Atlantic City to rescue the little guy.

'Sponge on the Run', the third Spongebob feature film after 2004's 'Spongebob Squarepants Movie' and 2015's 'SpongeBob Movie: Sponge Out of Water', again combines animation with live action. There are some great cameos again as well. Regarding the animation style, it follows the 'Sponge Out of Water' film in opting for 3D/CGI rather than 2D. But so loyal is it stylistically to the original that it hardly matters.

Speaking of loyalty, its writer-director Tim Hill ('Alvin and the Chipmucks') has been a writer for the Nickelodeon show since its inception in 1999. So he knows this character and universe like the back of his hand. As a result, he is faithful to its personable, quirky sense of humour and madcap characters. To a point, it seems he's pushing the franchise in new directions. But when you look closer, there's really nothing new here. 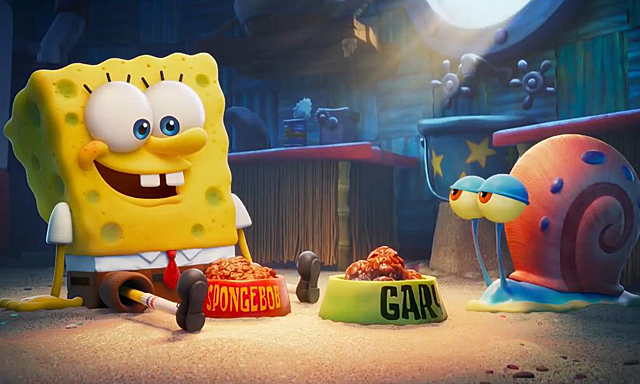 Not that we're complaining. After all, in these uncertain times, a bit of normality is a comforting thing. So expect Squidward to be irritable; Patrick to do silly things (he starts ironing when Spongebob talks about 'irony', and at one point eats all of Gary's litter box); Spongebob excelling at his job at the Krusty Krab; and Spongebob and Patrick getting into mischief (particularly in the carnival sequence), being their hyper, kiddish, easily distracted selves.

Moreover, there are moments in 'Sponge on the Run' that will really make you laugh. The opening scene riffs off David Attenborough and there's a western sequence that includes a dance number (isn't there always one?) and a couple of rather ingenious and hilarious cameos that the grown ups will love. That includes the Keanu Reeves cameo as the "simple tumbleweed" Sage - which got fans all riled up when the Spongebob movie trailer dropped - offering wisdom and some chuckles. Then Matt Berry's role, the voice of Poseidon, is pretty much a bunch of his prior credits amalgamated.

Mind you, it's probably the weakest of the three Spongebob movies overall, differing little in narrative beats particularly to the first film. In the third act, there's this whole summer camp bit which isn’t really in cannon with the series; those in the industry know will know it's basically a set up for an upcoming 'Spongebob' spin-off series. Still, 'The SpongeBob Movie: Sponge on the Run' is as silly and cheesy as you wanted it to be. While there's little here for non-fans, it's as speedy with the plot and jokes as 'Spongebob Squarepants' usually is. It makes for a fun and concise 95 minute long feature.

'The SpongeBob Movie: Sponge on the Run' is streaming on Netflix now.