An unexpected Doctor Strange character will be returning in ‘Avengers 4'

Just when you thought the cast couldn’t get any bigger.

Marvel has been trying to keep details about the mysterious Avengers 4 movie, which remains untitled, close to their chest for months now. But after trailer details reportedly leaked online recently, they may have dropped the ball again this week when executive producer Michael Grillo let slip about the return of an iconic character.

Grillo confirmed at the Austin Film Festival that the Ancient One, played by Tilda Swinton, would be returning for the latest Avengers installment which has a projected release date of May 2019.

Alongside screenwriters Christopher Markus and Stephen McFeely, he was discussing the logistical nightmare of trying to film around the schedule of so many A-listers when he accidentally mentioned Swinton. 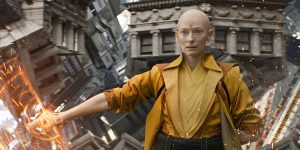 "When we got Tilda Swinton, she was just a 1-day availability,” he said.

The ‘Suspiria’ actress, and new music video director, looks set to reprise her role despite being killed off in 2016’s ‘Doctor Strange’. This would suggest that the new movie will contain dream sequences, flashbacks or time travel that will allow the characters to rewrite history and prevent Thanos’ chaos.

It remains to be seen exactly what The Ancient One’s role will be in the movie although she will be a useful ally for the Avengers. However, Swinton was only on set for a day so it’s unlikely she will play a major role.