Dust off your cowboy hat and boots, because 'Country 2 Country', the biggest country music festival outside of the USA, is back in Dublin next March. 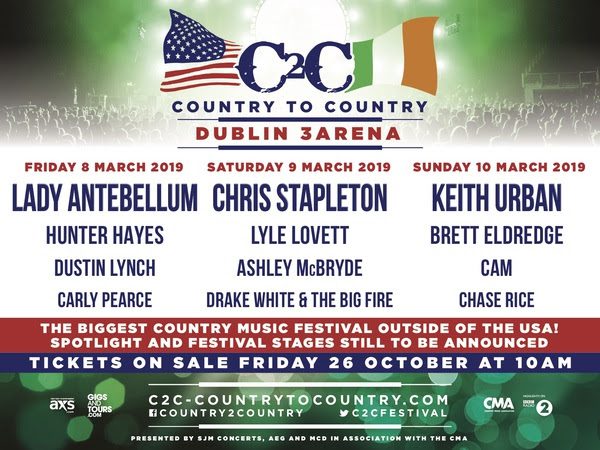 Tickets for 'C2C' will be on sale from this Friday, 26th October at 10am, and prices start from €54.65 from ticketmaster.

With his first show in the UK or Ireland for over ten years, the celebrated four time Grammy Award winner Keith Urban will play 'C2C' for the first time ever, while one of Nashville’s most revered and hugely acclaimed musician’s Chris Stapleton makes his much-anticipated return to the festival in a headline spot. Superstar trio and award winning fan favourites Lady Antebellum also return as headliners, following their hugely popular show at 3Arena last year.

Keith Urban has said: “I'm totally psyched to be getting back to the UK & Ireland to play some shows. The last time we were there was a blast- and with the music I’ve made since then and the new album we’re gonna get to play to a lot of new people. Can’t wait!!!!!