The first season drops on Amazon Prime this May

Clear your schedule this May, as the creator and executive producer of the likes of 'Parks and Recreation' and 'The Office US' Greg Daniels has a new comedy series on the way to Amazon Prime. And it's a good'un.

'Upload' is the first comedy series made by Daniels in 10 years, and it marks a new venture for the comedy creator that serves as a refreshing take on the over-stuffed genre. Set in the future, the series is shrouded in sci-fi elements that make it an interesting hybrid, and one which we weren't expecting.

Adapting to the times, Daniels' Amazon Prime series introduces the concept of a digital afterlife to audiences. In this futuristic world, citizens are able to enrol themselves into a life plan whereby if they die, they are able to upload themselves into another life and live out the rest of eternity without any worries - well, without too many worries at least. 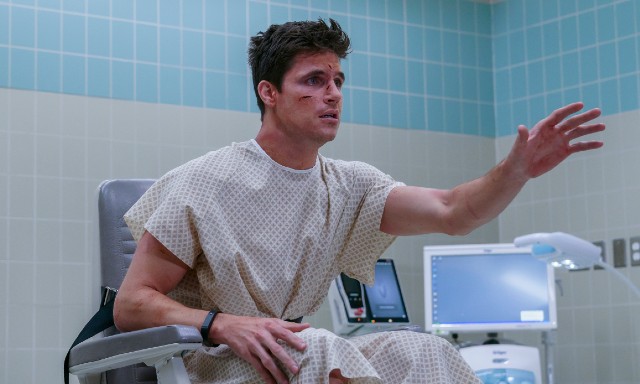 Robbie Amell's Nathan decided to be uploaded into the afterlife.

After getting involved in a near-fatal car crash, Nathan (played by Robbie Amell) is one such person who unfortunately has to make the tough decision between dying normally, or being uploaded into this neverending afterlife. Being forced into recreating himself digitally by his pushy yet flush-with-cash girlfriend Ingred (Allegra Edwards), he gets uploaded into Lakeview. Nora (Andy Allo) works in the real world for the big tech conglomerate, serves as Nathan's "angel" ensuring that his afterlife is as comfortable as possible.

Set in the future, expect to see loads of incredible high-tech gadgets in the real-world that you wish were real, as well as a generous helping of hilarious virtual reality elements in the afterlife to keep you entertained. From Nora being able to make her farts smell like cinnamon, to the ability to create fresh food thanks to a 3D food printer, to being able to video call between the real world and the afterlife - the sci-fi elements of the series are top-notch (and not too far from reality either). 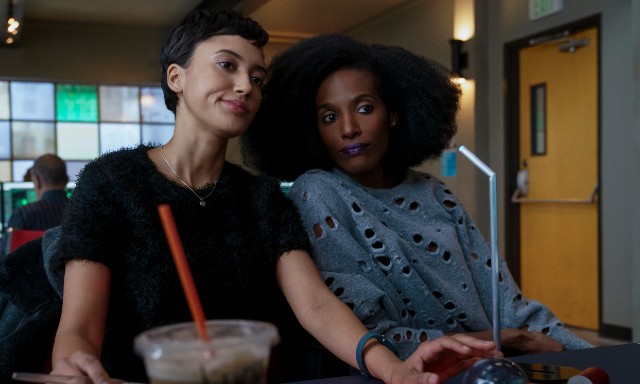 Andy Allo plays Nora (pictured here with Zainab Johnson's Aleesha), whose job it is to look after the paying guests at Lakeview.

Although it's a comedy series, there are a number of other hidden agendas at work in 'Upload' to keep you intrigued. Nathan's car crash happens under mysterious circumstances and his cousin Fran (the brilliant Elizabeth Bowen is a joy to watch on screen) has taken it upon herself to get to the bottom of what exactly happened. Nathan is also having a hard time remembering certain aspects of his past life, and serves as an important plot point throughout the 10 episodes.

It would be impossible to watch 'Upload' without noticing that even in the digital afterlife, there is still a huge gap between the rich and the poor - the details of which we wont' get into, but is it an important element to the show. Capitalism survives even after we are dead, people. 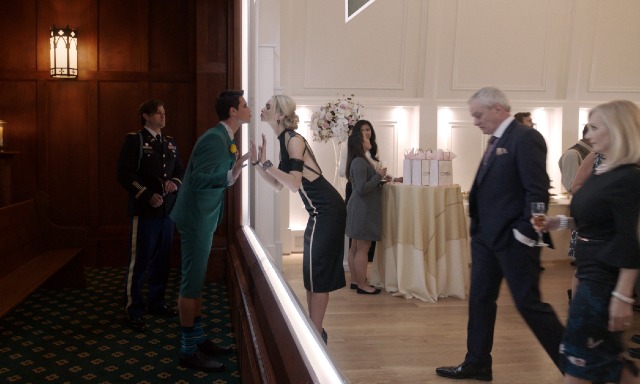 In the digital afterlife, Nathan is able to attend his own funeral

While 'Upload' is a Greg Daniels creation, you can't help but notice that the series is a departure from everything we've seen from him before. Yes, 'Upload' offers up hilarious moments and provides small nuggets of gold to keep us happy throughout the series, but what struck us most is how different the series is compared to his previous work. Based on the futuristic concept of a digital afterlife, 'Upload' feels more grounded than 'Parks and Recreation' or 'The Office US' ever were.

While the characters aren't as outlandish when compared to the likes of Michael Scott or Andy Dwyer, the series feels all the better because of it. The content is relatable and honest, and exactly the interesting direction and risk-taking journey one would hope upcoming comedy series would be offering up to viewers. Bearing in mind that this is Greg Daniel's first TV series in 10 years, it seems that the creator has matured - and so has his adoring audience.

You can check out our exclusive interview with Greg Daniels, Andy Allo and Robbie Amell right here too.

If our 'Upload' review has won you over, then all episodes will be available to stream on Amazon Prime from May 1.