Netflix review: If you're looking for a checkmate series, watch 'The Queen's Gambit'

The series launched on Netflix over the weekend

Who knew that you could get such an intriguing storyline out of chess? Directed and written by two-time Academy Award nominee Scott Frank, ('Logan', 'Marley & Me') the series is an intoxicating, inspiring watch.

Based on the fictional novel by the late Walter Tevis, Netflix has released a limited drama series following one young woman's passion to be the very best at the sport of chess-playing. 'The Queen's Gambit' is a coming-of-age story of one Elizabeth Harmon (Anya Taylor-Joy from 'Split', 'Emma', and 'The New Mutants'), as we gain insight into the life of professional chess-playing during the 1960s.

When we first meet Beth, she is after sleeping in on what appears to be her most important chess match to date. Turning back the clock, however, we're brought back to the late 1950s, to a time when a nine-year-old Beth is enrolled into a Kentucky orphanage, now abandoned and parent-less. While down in the basement, getting dust in her lungs from cleaning the chalk-dusters, she encounters the janitor Mr. Shaibel (Bill Camp), who is playing a foreign game to her - chess. Striking up a relationship, Beth soon learns the nature of the game, and so begins her journey to becoming the greatest chess player the US has ever seen.

As a coming-of-age series, 'The Queen's Gambit' deals with a young woman's search for acceptance in a world that has never been on her side. Throughout the seven episodes, Beth is forced to deal with topics such as drug misuse, alcoholism, love, loss, and obsession, all while trying to pave her way in a male-dominated environment. 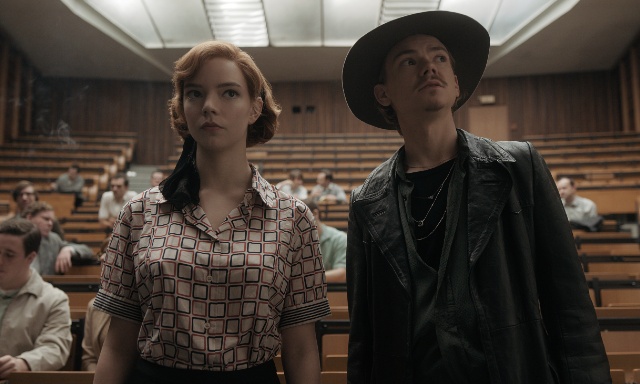 'The Queen's Gambit' review: Anya Taylor-Joy as Beth, and Thomas Brodie-Sangster as Benny

Taylor-Joy plays out the role of capricious and inquisitive Beth rather nicely - a girl who hasn't had a great young life so far but is finally seeing things in a sunnier disposition. She's joined in the cast by a number of on-screen rivals, who cross paths with her on multiple occasions - Thomas Brodie-Sangster ('Love Actually', 'Game of Thrones') plays Benny Watts; Harry Melling ('Harry Potter', 'The Devil All The Time') is Harry Beltik; while Jacob Fortune-Lloyd ('Strike Back') plays Townes. Be sure to watch out for newcomer Moses Ingram, who plays Beth's orphan friend Jolene, who we're sure to see plenty more of in the future given how she lights up the screen here.

Due to its fun nature, easy-to-follow storyline, and 60s era dripping from head-to-toe (with a fantastic soundtrack, expert styling, and a stimulating set design to boot), while watching 'The Queen's Gambit' you might find yourself inspired to track down that long-forgotten chess board from the attic.

'The Queen's Gambit' is available to watch on Netflix now.