With an episode title like that, it's kind of hard to not spoil the big reveal this week.

After last week's enjoyable spin of the wheels, this week's episode opens with the reveal that's been teased for over a year now - Rosario Dawson has arrived on screen as Ahsoka Tano.

The procedure of each episode throughout the season so far is adhered to here, but it's to director Dave Filoni's credit that it's never looked this good or this memorable. Mando arrives on Corvus, a desolate planet that's been terrorised by an Imperial holdout, he makes contact with Ahsoka Tano and - before you know it - they're teaming up to take on said villain and save the day.

For those who might not get the significance of who Ahsoka Tano is, here's the cliff notes - she was previously the Jedi apprentice of Anakin Skywalker, who went on to become Darth Vader. She fought in the Clone Wars alongside Skywalker, but was expelled from the Jedi Order in a plot by a fellow apprentice. That whole incident effectively ended her as a Jedi, instead choosing to wander the galaxy alone. By the time the Empire came to power, she had faked her own death and was hidden from existence for some time.

If you watched the animated series 'Clone Wars', or its follow-up 'Rebels', you're no doubt horrified by the major plot points we jumped over. At any rate, Tano's backstory and her place in the 'Star Wars' universe isn't all that important here. Like Cobb Vanth in the first episode or Bo-Katan Kryze in the third episode, she's a guest star who helps Mando on his way, and then departs at the end of the episode while pointing him to the next chapter in his story. 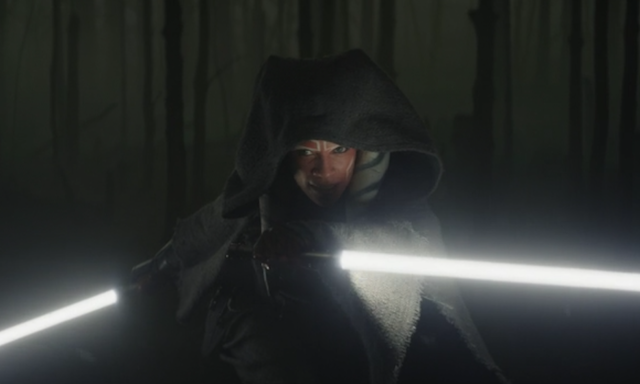 'The Jedi' draws heavily on Akira Kurosawa, particularly a shot-for-shot remake of the famous long walk in 'Yojimbo'. Of course, die-hard 'Star Wars' fans will know that Akira Kurosawa and samurai cinema has always been bubbling underneath the surface. After all, Darth Vader's helmet and the lightsaber itself takes inspiration from a samurai's helmet and sword.

As ever, the fight sequences are keenly directed and blocked out, with Rosario Dawson more than capable of bringing a physical component to Ahsoka Tano, and making her seem like a legitimate threat. Michael Biehn, however, feels like he's curiously mishandled. For an actor with such screen presence and known for roles like Johnny Ringo in 'Tombstone', he's almost an non-event in the story. Indeed, the final battle cuts away to Biehn's character and Mando listening out for it, exchanging a few words while they wait.

The other big reveal in this episode, however, is one that's bound to excite or confuse people, depending on how deep their knowledge of 'Star Wars' goes. Grand Admiral Thrawn was a character in the animated 'Rebels' series, voiced by Danish character actor Lars Mikkelsen. Before that, however, Thrawn was one of the most popular characters in the Expanded Universe, a decades-long continuation of 'Star Wars' that took in books, comics, videogames, radio plays, and was more or less swept away when Disney took over Lucasfilm to make way for the sequel trilogy. Such was Thrawn's popularity, however, that Lucasfilm took the unusual step of reintroducing the character back into the canon.

Thrawn's story is... very long, one that we might do an article on when the time is right. For now, however, it appears as though this is more of a first mention than the character entering the cast of the show.

Yet, with his mere name being mentioned, it speaks to a lot of what's to come. 'The Mandalorian' has thus far existed on the fringes of 'Star Wars', if you like. It's never ventured into the main characters, instead happily exploring sectors that have been neglected and feel ripe for exploration. Peeling back some of the mystery - naming the Child, for example - can be a dangerous thing.

So much of what's made 'The Mandalorian' exciting and kept people tuning in week after week is trying to find out what happens next, and where Mando will end up after each episode. The downside of keeping the show on such a linear path this season, moving from planet to planet and guest-star to guest-star, is that there's an onus on the show to make itself bigger with each passing episode. Yet, conversely, this is a show that's carved out a niche in its tightness of story and plot.

Leaving all that aside for the minute, this week's episode is a highlight of the season thus far. Pitched and balanced beautifully between action and moving the story forward, you've got to wonder how they're going to top it.