After what felt like an eternity, 'The Mandalorian' strolls back into our lives.

For something that's been an experiment for a franchise like 'Star Wars', what's been fascinating about 'The Mandalorian' is that it is a show that traffics in nostalgia and borrows heavily from the past.

Throughout the first season, 'The Mandalorian' rubbed up against tropes in westerns like 'The Magnificent Seven', 'Have Gun - Will Travel', and it's easy to see why. Mandalorian armour is heavily influenced by it. The visor shape was directly inspired by Clint Eastwood's hawk eyes, while the lone gunslinger is a common western trope. Therefore, putting someoe like Timothy Olyphant into the opening episode should feel like a cop-out.

After all, this is the guy from 'Deadwood' and 'Justified', two of the most successful western TV shows of the past two decades. Yet, his casting as Cobb Vanth, the marshal of a dusty mining town on Tatooine who just so happens to wear the armour of Boba Fett, feels inspired and mythic. You couldn't imagine anyone else playing him. In fact, the role feels like it was written and made with him in mind.

His outfit, sans the armour, has the vague memory of John Wayne in 'The Searchers' or James Arness in 'Gunsmoke', and he uses phrases like "starting out" and pours out blue milk into shotglasses. He's as western as it comes. Again, it should feel like it's trying way too hard, but it's to Olyphant's credit that he makes it look and feel so right. If ever there was an actor who feels comfortable in his own skin, and uses that in every role, it's Timothy Olyphant.

The story picks up right where the final episode of Season 1 left off, with Din Djarin, or Mando, sent on a quest to return The Child to his own kind. In order to do that, he needs to find other Mandalorians who can guide his path. This leads him back to Tatooine where he learns of a Mandalorian who is the marshal over a mining town. The marshal, Cobb Vanth, freely admits that he isn't one of Mando's people and while he has no awareness of the providence of his armour, he simply uses it to inspire fear in those who would do harm against the townspeople he has chosen to serve.

Again, this kind of story is peak western, right down to the flashback sequence detailing how Vanth came to find the armour, to how Mando gets his armour by pulling together the local Tuksen Raiders and the townspeople to fight an even bigger adversary. Jon Favreau's direction isn't encumbered with lengthy dialogue or exposition, and the action setpieces - particularly the final moments - have a real sense of scale about them, something that's been like heretofore in the series. 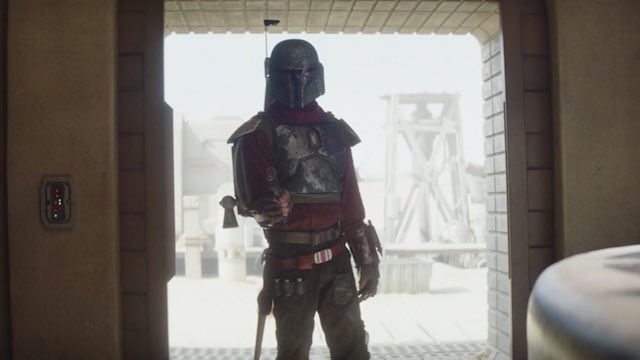 It's probably not a sign of things to come, more of a big splash for the season opener. But the big splash, however, came in the dying seconds when - gasp! - a bald-headed warrior who looked an awful lot like Temeura Morrison watched in silence as the Mandalorian rode off into the sunset. The question now is whether that's Boba Fett without his armour, a surviving clone (they do all have the same face, remember), or someone else entirely new.

Given how the first episode saw Boba Fett's armour as a focal point, it seems pretty certain that Morrison is returning to play Boba Fett. After all, the Mandalorians have a strict rule about never losing their armour and never removing their helmet, so the idea of Boba Fett wandering the deserts of Tatooine as punishment for breaking this rule fits in with the samurai / western structuralism that 'The Mandalorian' so frequently makes use of.

As season openers go, 'The Marshal' doesn't try to leap itself forward with a convoluted story for the episodes ahead. It's got a swagger to it now, it knows where it's going, and it's not overly concerned with when or how it gets there, just that it'll get there when the time is right.

'Wednesday' is ooky, spooky fun with a solid performance from Jenna Ortega

'The Watcher' is a chaotic mess - in a good way