Review: ‘The Final Table’ is like 'Masterchef' on steroids

‘The Final Table’ surprisingly follows a similar format to Netflix’s sport’s show; teams from around the world compete against each-other to create a different dish from a different country in each episode. From Mexico in episode one, all the way through to France in episode nine - three judges from each country will decide which teams have adapted their country’s favourite dish in the best way. For example, Spain’s three judges choose paella as their nation’s favourite dish; and if the judges don’t like your take on paella, you’re in danger.

The three least favourite teams of each episode will face off against each other again. And this is where ‘The Final Table’ raises the stakes. A famous chef from the country will make the final judgement call, and eventually eliminate one team.

The contestants on 'The Final Table' are all professional chefs in their own countries, there are no amateurs here. The show culminates in the final episode when only one individual will win that tenth spot on the coveted Final Table. The show's winner will join the previous nine famous judges from each episode, and all sit around an awkwardly big table and laugh maniacally, we presume. 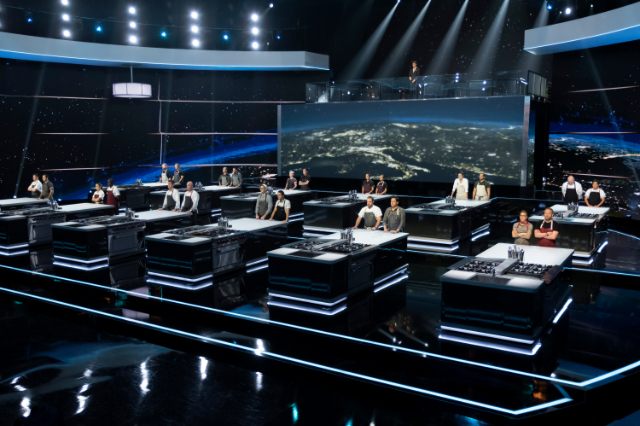 'The Final Table' feels like 'Masterchef' on steroids - but unnecessarily so. The show is a bit of a mishmash of various other shows thrown together into one big pot, and the pot's been left to boil. The cooking show has a "go big or go home" type of atmosphere, and it's disconnecting.

The first two episodes in particular were lost on us; here was no real sense of urgency, nor was it as fun as we were expecting. All of the elements that make 'Masterchef' and even 'Hell's Kitchen' so enticing, don't seem to be present here. The show might have benefitted from starting off with less teams, as it’s only when you get to the third or fourth episode that the show starts to loosen up and take itself less seriously.

‘The Final Table’ is presented by Andrew Knowlton, who is the Restaurant Editor of Bon Appétit magazine. Unfortunately, Knowlton is extremely wooden while presenting the show in the early stages. However, he very much comes into his own later in the series, and makes the show that bit better because of it.

One major boost to 'The Final Table' are the guest judges from each country. Comedian Hasan Minhaj is a highlight during India’s show; while Cat Deeley and Gary Lineker make an appearance to get contestants to make a full-English Breakfast. Some judges inject a much-needed spark into the cooking show, while others are forgettable.

While ‘The Final Table’ certainly offers up a tempting dish for those who are a dab-hand in the kitchen, it takes a while for the show to actually heat up. If you’re a fan of ‘Masterchef,’ ‘The Final Table’ might be a worthy watch. If you’re not, then maybe it might be worth tuning into episode three for the British episode, and see if it's jalapeño business.