Review: 'Chernobyl' is as gripping as it is unsettling

A TV show about the Chernobyl nuclear disaster was never going to be easy viewing. For a long time, it felt like it was really too soon to address such a catastrophe, but now Sky and HBO have teamed up to deliver a show that gives you a dramatised front-row view of what went down on and in the aftermath of that infamous night on April 26th, 1986.

They don't shirk away from the hard truths either, with a show that will no doubt rock a few boats. Speaking at the press screening last week, Adi Roache, founder and CEO of Chernobyl Children's Project International spoke about just how much was covered up after the disaster. That the entire continent of Europe was mere hours from being completely uninhabitable. That the reason for this not happening is down to the trojan work of a few who suffered a lifetime of radiation damage in the aftermath. Adi is now campaigning for these first responders to receive the Noble Peace Prize.

On the night of April 26th at 1.23am, Reactor #4 of the Chernobyl Nuclear Power Plant in Pripyat in northern Ukraine exploded, sending a plume of radioactive material into the air, and illuminating the night sky with an eerie blue glow. The accident resulted from, of all things, a safety test. Through a series of increasingly reckless decisions, the reactor was pushed to extremes, and when the operators attempted to shut it down, they unintentionally triggered the worst nuclear disaster in history.

What's shocking from watching the first episode of 'Chernobyl' is just how unaware everyone was on the night to the extent of what happened. Those who were, weren't listened to. The episode begins with the suicide of nuclear physicist and state apparatchik Valery Legasov (Jared Harris) two years to the minute after the event. Before he dies he leaves a series of tapes revealing what really happened on the night and in the aftermath.

We are then taken back to that fateful night to see for ourselves. To see how the deputy chief engineer Anatoly Dyatlov (Paul Ritter) refused to believe the extent of the damage from his junior colleagues. How the initial radiation readings were about a hundred times lower than they actually were. How a group of locals gathered on a bridge to watch the flames believing it to be perfectly safe to do so. The first episode doesn't tell you this but all of those people died and that bridge is now known as The Bridge of Death. The entire town of Pripyat and its surrounding areas are still uninhabitable and likely always will be.

It sounds like fiction but the makers of 'Chernobyl' have done their research. Most of the stars, who include Emily Watson and Stellan Skarsgard, play real-life people who were involved in the disaster. Irish actor Jessie Buckley plays Lyudmilla Ignatenko, the wife of one of the first firefighters who went into the explosion after it happened. "I don’t think a lot of people know that Chernobyl was spewing out two Hiroshima bombs worth of radiation per hour for quite some time," director Johann Renck said.

Craig Mazin, writer and executive producer of 'Chernoybl' said: "The whole truth of what happened at Chernobyl - before and after the accident - goes far beyond the events of April 26th, 1986. As the story of Chernobyl unfolds, you will discover the culture of lies that led to the disaster. You will experience the incredible lengths required to stop a total nuclear meltdown. You will learn just how close and just how much of the entire European continent came to becoming completely uninhabitable. But above all, you will witness the true stories of the heroes of Chernobyl as they fought an unprecedented war against an invisible enemy, even as their own government betrayed them." 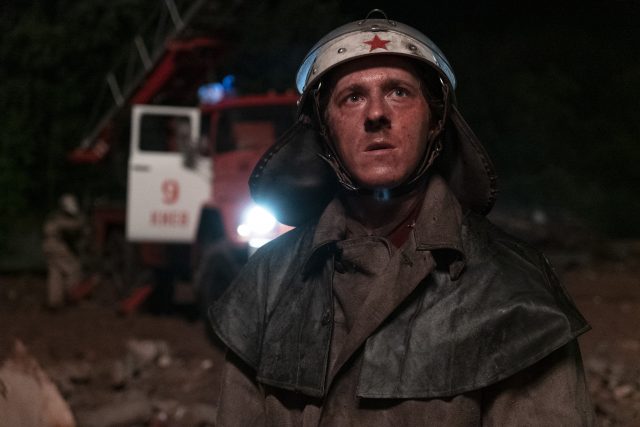 The opening episode of 'Chernobyl' depicts the night of the nuclear disaster as truly harrowing but without resorting to any disaster movie tropes. The story is told through the human experiences of those involved, giving a face to the many who worked on the front line who either died or suffered a lifetime of health problems in the aftermath.

The series clearly made a decision to not go down the road of having everyone do fake Russian accents. This works and it doesn't. It makes the whole thing easier to understand yes, but feels more like it's happening in a British town than a Russian one. Albeit a British town controlled by a suffocating Soviet government.

It stays true to the story of Chernobyl by not hamming it up with special effects or over the top performances and it's all the more powerful because of it. A story of how a government fails to truly recognise the urgency of a situation that is harming our planet and the people in it also feels timely amid the issue of climate change.

Most of all though, 'Chernobyl' acknowledges the unsung heroes of this disaster and shows us another side to a well-known story. Gripping, devastating and truly shocking, 'Chernobyl' is simply necessary viewing.

'Chernobyl' continues next Tuesday on Sky Atlantic at 9pm.