Netflix Review: 'Love, Death + Robots' is a marvellous feast for the eyes

The animation used throughout 'Love, Death + Robots' will blow your mind, and will have you coming back for more.

From the minds of Tim Miller ('Deadpool') and David Fincher ('Se7en') comes an animated series like no other. 'Love, Death + Robots' is a (mostly) animated anthology series consisting of 18 episodes, each with their own unique animation style and out-of-this-world concept. As you might imagine from these two immense directors, this series is definitely not child-friendly.

With an anthology series such as this, concentrating on such topics as the future, space, robots, and alternate realities, similarities with 'Black Mirror' are present from the get-go (the opening titles sound extremely similar, for one). However, because 'Love, Death + Robots,' implements animation to tell the story, and not real-life scenarios, it allows the series to go much bigger in scope than 'Black Mirror' has ever been able to.

All 18 episodes, each running anywhere in between a bite-sized six minutes, to an in-depth 17 minutes, have their own artistic vision. While one may rely heavily on near-lifelike CGI graphics to tell their story, the next could be a traditional 2D anime. Each episode is a brand new story, and feels completely different from the one before.

One particular stand-out of the series is 'The Witness' which boasts both a phenomenal artistic style, as well as a gripping story. The storyline involves a woman witnessing a murder, and then we follow her as she tries to get away from the culprit. In the blink of an eye, the animation shifts from near-reality to manga, and the urban Asian world we are dropped into feels so real. 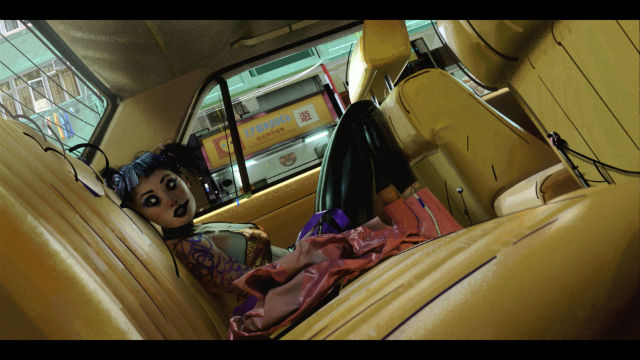 'The Witness' from 'Love Death + Robots' on Netflix

Some other highlights of the anthology series are 'Alternate Realities,' which is a welcome comedic entry that allows you to view six different alternate ways that Hitler might have died; 'Beyond the Aquila Rift' has a similar, if not a much better storyline to 'Passengers' with Chris Pratt and Jennifer Lawrence; while 'When the Yogurt Took Over' is a John Scalzi short-story brought hilariously to life.

Of course, given the vast stretching of a series such as this one, there are bound to be some duds in the mix too. One of the weakest of episodes by far, is one that doesn't feature much animation at all. Remember that 'Treehouse of Horror VII' episode of 'The Simpsons' where Lisa accidentally creates a universe out of a tooth that leaps decades in the blink of an eye? 'Ice Age' takes that idea and runs with it, getting Topher Grace ('That 70's Show') and Mary Elizabeth Winstead ('Fargo') to stumble across a new civilisation in their freezer.

Another one that was a bit disappointing was 'Three Robots' which followed a rag-tag team of three protagonists wandering around an abandoned world. The story doesn't really go anywhere, but with a running time of just 11 minutes, it's not like you've wasted that much time tuning in.

If a season two of 'Love, Death + Robots' gets green-lit by Netflix down the line, it would be great to see sequels, or even prequels to some of the better stories here. 'Sonnie's Edge,' 'Zima Blue,' and 'Suits' could be very worthy contenders, as they hook you in so much, it's disappointing that we are only dropped into their world for such a short period.

All in all, if you're looking for something quick and easy to watch on Netflix then 'Love, Death + Robots' is a no-brainer. In the way that we treat 'Black Mirror,' start from the beginning and quickly work your way through all 18 episodes. You'll end up loving some, disliking others, and questioning "what if?" with each and every one of them.