Chains, whips and hilarious quips, oh my! 'Bonding' may seem like an over the top sex-fest, but it is definitely anything but.

If you're thinking of watching 'Bonding' because it seems like a play on the word "bondage", and it only involves sex - get your mind out of the gutter. After being thrown into the deep-end in episode one, you'll quickly learn that the series has much more heart and relatability than you think.

Following the lives of best friends Tiff (Zoe Levin) and Pete (Brendan Scannell), we soon find out the rather interesting story of how they make ends meet in New York City. Tiff is a grad student by day, and dominatrix by night (as you do); Pete is broke, and has a fear of ever getting up on stage to become a stand-up comic. Tiff decides she needs a helping hand with her night-time work, and ropes in her gay best friend to be her assistant. The pair try to get to grips with being friends who are now working together, while also dealing with their non-existent real-life romantic relationships. 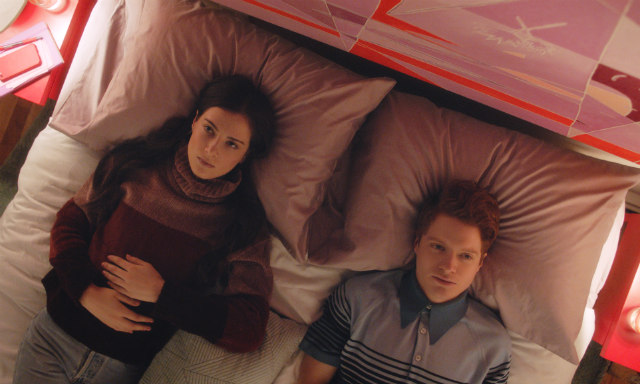 Tiff and Pete having a PG-13 sleepover

While sometimes heavy on the whips, piss, and fetish, there's a lot of hilarity, as well as heart, in 'Bonding' too. Loosely based on the real-life experiences of writer, director and showrunner Rightor Doyle, the series won 'Best Episodic Series' at the LA LGBT-oriented film festival, Outfest.

Co-starring in the series are some familiar faces: D’Arcy Carden (Janet from 'The Good Place') plays uptight wife Daphne while Kevin Kane (who's made appearances in some Amy Schumer movies) plays Tiff's Professor Charles.

The one downfall with 'Bonding' actually has nothing to do with the show's content. In fact, the brilliant storylines and hilarious scenarios are second-to-none. The only problem with the show is its criminally short running time. Just when you start to really begin to enjoy an episode, it's over. The longest-running episode is 18 minutes, the shortest 12, meaning after an hour of watching, you've somehow polished off four episodes of the seven-episode season.

Devastatingly short, 'Bonding' deserves to be treated with a bit more respect. If a second season makes its way to Netflix, here's hoping it will get a longer run. More episodes, or even just longer episodes, are definitely necessary. Our two main characters deserve that at least.

If you're looking for a quick, hilarious jaunt chock full of innuendo, funny life-experiences, or are just a little bit curious - 'Bonding' is for you.

'Lupin' Part 2 may not be parfait, but it's still incredibly enjoyable