Netflix review: Someone needs to plunge 'Cursed' to the bottom of a lake

Because it's about Nimue, the Lady of the Lake (in case you didn't get that)

In this latest iteration of the legend of King Arthur, we see events from the perspective of Nimue, who would eventually become the Lady of the Lake. The teenage sorceress is looked down on by her village, who say she is "cursed" and that she is a witch (even though they all seem to have powers..). Her mother (Catherine Walker) insists she is blessed and meant for great things. Nimue meets Arthur (Devon Terrell) on her travels and soon finds herself pursued by the frightening Red Paladins. She'll have to overcome near impossible odds if she is to complete her quest of bringing an ancient sword to Merlin the magician (Gustaf Skarsgård).

Upon watching the opening animated credits and observing the general storyline (teenage girl with supernatural powers who is initially hesitant to embrace her identity, fights to hold her own in a world of men) and CGI (used for fancy magic tricks which are almost verging on violent, but generally comic book-like enough in their aesthetic to not warrant an R-rating), it's pretty obvious those behind 'Cursed' are trying to repeat the success of 'Chilling Adventures of Sabrina'. So too is the series leaning into another Netflix hit, '13 Reasons why', in its casting of Katherine Langford. She's joined by Devon Terrell, who played Barrack Obama in biopic 'Barry', and Gustaf Skarsgård, 'Vikings' star and member of the Skarsgård acting clan. But there can't really be a remarkable performance when a production is so unremarkable.

There's a trippy sequence that opens 'Cursed' involving what appears to be a talking deer. From there, our rebellious teenage protagonist runs away from home rather than taking up a responsible position in the community; find herself besotted with a handsome boy; gets chased after screwing over a local with her magic; and fights offs wolves á la 'Beauty and the Beast'. You know, all that usual teen fantasy stuff. Sure she has problems, like being responsible for the deaths of those around her. But she's also irritatingly self-pitying.

The rest of the cast don't fare much better. You've got the alcoholic authority figure in Merlin (never seen that before) and teenage boy with father figure issues in Arthur. As the leader of the Red Paladins, Peter Mullan seems to be trying to do a High Sparrow from 'Game of Thrones' impression and you've a Nurse Jackie wannabe in there too because sure, we've got to populate this world with some kind of 2D types. There's an assassin type of guy called the Gray Monk who lurks about with some kind of backstory (with a lame pay-off) and a side storyline involving a love affair between two nuns which also feels 'GoT'. Just as that show had an appalling finale, so too does this. By the end, you don't know or care what's going on anymore or who's dead. 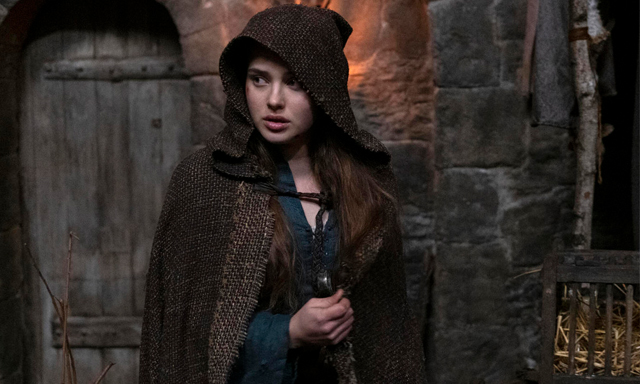 When the Honest Trailer for this show inevitably appears, we're positive it's also going to refer to the fact that they're bloody obsessed with lineage; and for some reason (maybe, again, to avoid being censored for violence), there's an awful lot of slapping. Even the fight choreography and action set pieces come off as stilted and stupid looking. A scene involving Nimue emerging from the water (as pictured above) is especially substandard. No amount of Guy Ritchie slow mo shots can save it.

Everything about 'Cursed' feels poorly developed. It's all just very safe and dull and samey.  It feels like it's borrowing from a whole lot of other fantasy texts ("The Hidden" seem to be like "The Force" while the sword acts like a sort of "one ring to rule them all", endowing with power but corrupting its wielder) in a hope that there'll be some sort of emotional resonance. It's one thing binging a series. It's another dashing through to get it over and done with because you're obliged to review it. And this one is nearly feckin' 10 hours of utter trite. It's simply impossible to say one nice thing about a show that is so overwhelming in its mediocrity.