Netflix review: 'Away' is one of Netflix's best dramas of 2020

Hilary Swank leads a diverse team into the depths of space

It's up to US space commander Emma Green (Hilary Swank) to lead her international team of five on a three-year-long journey, to be the first people to successfully land on Mars. As we accompany the team's journey into space, we stay grounded on Earth as Ground Control in Houston track their every move, while also following the intricate lives of Emma's family, her husband Matt (Josh Charles) and teenage daughter Alexis (Talitha Eliana Bateman).

From Executive Producer Jason Katims ('Friday Night Lights', 'Parenthood'), comes a Netflix series that is equal parts thrilling, emotional, and an all-round incredible watch. Without revealing too much about the plot of 'Away', we can easily say that this is going to be one TV series everyone will be talking about over the coming weeks.

For some, it might be surprising to see Swank, the winner of two Academy Awards for 'Boys Don't Cry' and 'Million Dollar Baby', show up on a Netflix series - but we can see why. Her character of commander Green is given the chance to show off a vast range of emotions for the actress to tackle, as her stressful position of power proves to be, at times, too much to handle. Leading a group of astronauts into space isn't the cake-walk you think it might be, it seems.

Along with the US Government tracking her every decision, Green also has to deal with heads of each of her colleagues' countries on her back too, not to mention the whole world being able to live stream moments from home, or her intense family matters which she has to hear about while in space. As you would imagine, Swank - forgive the pun - gets on that rocket and rides it to the moon, because she is the standout performance on the show. 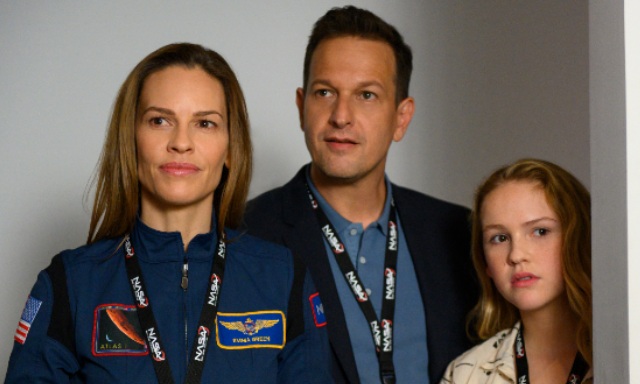 Hilary Swank, Josh Charles, and Talitha Eliana Bateman in 'Away'.

'Away' is an ensemble production, however, and Swank's on-screen space-mates are wonderfully cast in their respective roles also. Mark Ivanir as the steely-exterior Russian crewmate Misha, Ray Panthaki as Indian doctor Ram, and Vivian Wu as Chinese chemist Lu all struggle to adapt to their new leader as they embark on this perilous journey together. Ato Essandoh as botanist Kwesi doesn't get to flourish as much as the rest of his team, but his character does provide a touching backstory. In fact, each has a unique backstory, which is told via a 'Lost'-type flashback.

Providing some brief respite from the all-consuming nature that is space - but is by far less interesting - is the drama unfolding in commander Green's family unit back at home. Her daughter is feeling angsty, and her husband is dealing with health problems, but in a series focused on space travel, it's the less interesting arc of the two. The team's journey highlights every single victory and bump along the way, which may lead you to you hiding behind your hands as you look on in fear at what mishaps the team must face. 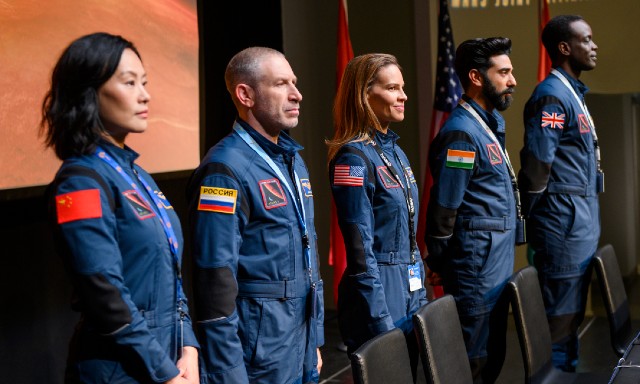 Hilary Swank and her space team

If you are looking for drama on Netflix, we cannot recommend 'Away' enough. Being based on the now-often threaded ground that is a space adventure, one would be tricked into thinking the series is just another notch on the space belt in terms of being the newest of TV shows and movies to be based on space exploration. It is this, but it is distinctly unique from most titles we have thus far. There are no aliens ('Arrival'), no monkeys (Netflix's disappointing 'Space Force'), no intergalactic shifts in space and time ('Interstellar') - it's just pure spectacle (although 'Gravity' might be the nearest comparison if you're looking for one). It's a deeply personal story portrayed in breathtaking style, and one we are glad to see arrive on our screens this year.

But will there be a second season or will it just be a one-trick series...? You'll have to tune in to the very end to see what happens.

'Away' arrives on Netflix September 4.