*This is a review of episode one and two of 'The Walking Dead: World Beyond', entitled 'Brave' and 'The Blaze of Glory'*

What's that you ask? Another 'Walking Dead' series? Yep, a brand new and separate spin-off from the post-apocalyptic comics and main Rick Grimes-led TV series from AMC. However, with the main series on the cusp of finishing up (not until 2022, mind), 'The Walking Dead: World Beyond' brings a new generation of zombie-killing characters to the fore.

Set 10 years after "the year the sky fell", the series stars a much younger cast than we've seen in any of 'The Walking Dead' series to date. Two teenage siblings, Iris and Hope (played by Aliyah Royale and Alexa Mansour), are the focus here, both students living in a university campus colony which has learned to adapt to the current worldwide situation that still rages on outside of the compound. Yes - the world has learned to adapt to zombies (which they call "Empties" here) and everyone can live their lives as normal without too many appearances from the dead. Essentially, these are the first generation raised following the zombie apocalypse. 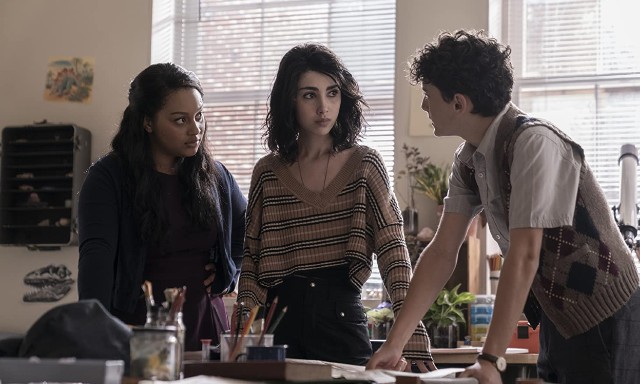 The siblings vary in their outlook on life since that fateful day 10 years ago, with Iris suffering from nightmares and Hope plagued with flashbacks from the night that their mother died. The youngsters get the notion that their father Leo, who is a scientist with the black-clad and mysterious Civic Republic in New York City, is in trouble and so embark on a journey outside of their safe compound in order to save him. Joining the sisters on their trek are Silas (Hal Cumpston) and Elton (Nicolas Cantu), with Huck (Annet Mahendru) and Felix (Nico Tortorella) hot on their heels.

Now, anyone who has seen either 'The Walking Dead' or 'Fear The Walking Dead' will know exactly what to expect here. If you're a fan of either of the series, and have still managed to remain a loyal follower after nearly 10 seasons of the former and six of the latter, then you'll enjoy this new take on the franchise. However, if you grew bored of the endless hordes of zombies long ago and yet another series based in the same world doesn't do anything new for you on paper, we'd recommend giving this one a miss.

'The Walking Dead: World Beyond' had the opportunity to breathe new life into an already petering-out series, but even with a new cast, new storyline, and a younger target audience in mind, the series feels like everything else we've seen before. Even though we're encountering a newer, more hopeful world, the tone here remains that same: dark, drab, and depressing. Don't be fooled by the colourful posters of the series - as even the characters' clothing remains the black, grey, and brown affair that we've seen countless times - although Elton's corduroy suit is a welcome pop of colour that we've been crying out for.

In a real-life world where we are desperate for some sort of escape from reality, 'The Walking Dead: World Beyond' rings slightly too close to home. There's nothing new or exciting enough to set the series apart from the previous two, making you wonder why this was needed in the first place.