It arrives on Netflix on April 24

'After Life' continues to follow Tony (Ricky Gervais) in the aftermath of his wife Lisa (Kerry Godliman) passing away. Though Tony still suffers from depression, he is coping better than before. He's also trying harder to make a connection with his colleagues and acquaintances. All are facing their own uphill battles as the local newspaper he works at lands into jeopardy while his brother-in-law and boss Matt (Tom Basden) fears the failure of his marriage. Though there was potentially a new romance for Tony with Emma (Ashley Jensen), things have fizzled out. Now a newcomer has begun flirting with her at the nursing home where she cares for Tony's father. While Tony hasn't been so lucky, romance is blooming between two characters you wouldn't expect.

Ricky Gervais' 'After Life', which he created, produced and directed as well as stars in, may be the comedian's most acclaimed series since 'The Office'. Of course it has a decidedly blacker sense of humour and is more sombre than we've come to expect of Gervais. It marks a fascinating maturation in his writing and creativity, connecting with a wider audience than any of his prior works. Tonally, this second season is just as sad, if not sadder, than its predecessor. It also has some of the funniest moments to come out of the show so far.

Some things remain the same, for example, the cynicism of the interview subjects of local paper the 'Tambury Gazette'. This time round there's a woman who has just turned a hundred, calling everyone the c-word, while a father whose new identity irks his wife and teenage daughter, makes for a humorous if not controversial scenario, showing again that Gervais isn't afraid to be un-PC. 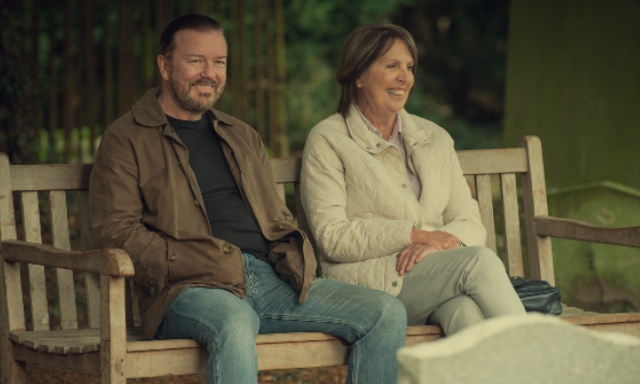 Some might miss the fact that Tony isn't as bad humoured as before. But actually it marks a compelling growth of character and aside from a meditation that turns into a disaster, you can see how hard he's trying. Tony really looks out for Matt and his colleagues now, even those he was never the biggest fan of. At the same time, he still only has so much tolerance for people's nonsense.

Season 2 of 'After Life' is as awkward, funny and sweet as ever. Some of the best scenes are still with widower Anne, played by Penelope Wilton just phenomenally. Her and Tony's graveyard conversations really do punch you in the gut and make you want to sob at times. Then the mood can turn in a second and become so cringe, for example, when Tony and Matt head to the bar and the latter attempts to flirt. As with season one, there are moments where you don't know whether to laugh or cry, for example, when the 'Tambury Gazette' interview a young woman who's had so much work done she can't express herself. Really the best thing about the series is how optimism and hope triumphs. In spite of being so orientated around death, it truly believes in the kindness, compassion and generosity of people.

The final moments of the series, however, have the potential to knock out of balance that emotive, ideal harmony it accomplished. This reviewer wasn't keen on it but they'll leave it up to the viewer to decide how to feel about it. After all, so much of the success of 'After Life' is its personal impact on the individual.

‘After Life’ season two arrives on Netflix on April 24.