Did you spot this 'Game of Thrones' crossover on last night's 'Westworld'?

And it was all George R.R. Martin's idea

In case you've been having a dragon-shaped hole in your life ever since 'Game of Thrones' concluded around this time last year, the newest episode of 'Westworld' offered up fans a brief glimpse of a well-known character from the fantasy series.

*SPOILERS FOR BOTH 'WESTWORLD' AND 'GAME OF THRONES' LIE AHEAD*

The third season of 'Westworld' kicked off last week, introducing viewers to a new character in Aaron Paul's Caleb. The season has taken a decidedly different tone to the previous two, and has even created a crossover we never thought possible.

In the second episode which aired on Sky Atlantic last night, entitled 'The Winter Line', viewers might have noticed a familiar-looking dragon which the characters Bernard and Stubbs were discussing. While walking through a medieval fantasy world adorned with plenty of swords and shields, the biggest set piece which stood out was the gigantic dragon lying on the floor.

It turns out that massive dragon was Daenarys Targarayen's son Drogon, while the two men in the container with him were 'GOT' showrunners D.B. Weiss and David Benioff. 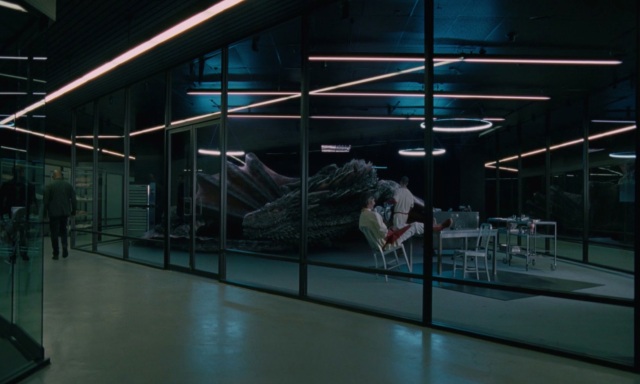 Drogon the dragon appeared briefly in the newest 'Westworld' episode.

According to Variety, the idea of the 'Westworld' / 'Game of Thrones' crossover came from the latter novel's writer Geroge R.R. Martin. The writer, who has been driven to finishing 'The Wind of Winter' (only because of self-isolation), has a good relationship with Jonathan Nolan, who is one of the showrunners on 'Westworld'.

He told the publication: "We’re also friendly with George R.R. Martin, and George had consistently since the first season said, 'We’ve got to do a tie-in with 'Game of Thrones'.’ People forget that George was originally a TV writer and he came up in the TV world in which you’d occasionally have these crossover shows, which the fans would f*cking freak out over. So George had always been pitching the crossover show."

Will this be the first and only 'Westworld' and 'Game of Thrones' crossover we'll see this season? We're intrigued to see where this crossover might be headed...