A classic Jim vs. Dwight scene

One of John Krasinski's most famous cold opens against his desk mate was actually all one big accident.

'The'US Office' provided us with some of the funniest moments of comedy gold during its nine -season run, and a lot of the time it was Dwight Shrute and Jim Halpert who provided a lot of the laughs. Interestingly, it turns out that one of their most famous opening scenes never actually meant to happen - or at least, wasn't meant to be so brilliant.

If you haven't already been following the podcast 'Office Ladies', then you need to put it on your radar. Hosted by ex-'US Office' stars Jenna Fischer and Angela Kinsey - who played Pam Halpert and Angela Martin - they go though each of the 201 episodes providing a behind-the-scenes look. Every Office fan's dream.

Now, in a recent episode, the pair have revealed that the eighth episode of season two, entitled 'Performance Review', has an opening scene that happened accidentally. While Dwight is informing Jim of the benefits of using an exercise ball while bouncing around his desk, Jim decides it would be the perfect time to pop his ball with a pair of scissors. 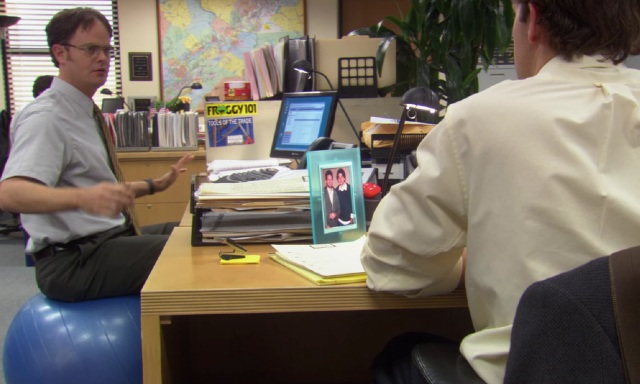 The' US Office' scene in question.

Jenna reveals however that the ball was never meant to pop. She told listeners: "Ladies and gentleman, it was not meant to pop. I traded messages with Phil Shea, props master, and he told me all about the fitness orbs.

"First of all, he bought 17 [orbs] and he practiced with John using three of them. The idea was that John would stick the scissors into the fitness orb, it would deflate very slowly, and the camera would be in front of Dwight’s desk and you would see him just very slowly sort of melt to the floor as Jim very smugly [looks on]. That was what was in the script," she said.

"So they practiced three times, it worked perfectly. And they had 14 [orbs] left for the scene, and Phil said to John, 'as long as you don’t hit the seam of the ball with the scissors the ball will slowly deflate'. They did 13 takes and it worked just right and everyone was ready to move on."

However, they decided to do one last take of the shot, and this is the one that made it into the episode. Angela said: "On the last take, John accidentally hit the seam of the ball with the scissors and the entire thing popped."

"You can see the shock on Rainn's face, and he fell to the floor," Fischer said. "We were all completely shocked, like, 'oh my god.'"

And now, here is the scene for you to re-watch in all it's glory - and if you watch closely, you can see John Krasinski jumping out of shot while breaking character.