But like the first season, we’ll have to wait for Disney+ to arrive in Ireland to see it.

Last month we brought you the news that Disney bosses wanted to cash in on the success of ‘The Mandalorian’ season one, released in November, by ordering another season.

Showrunner Jon Favreau has now confirmed a general time frame for the new instalments with this simple Twitter message and image of a new-look Gamorrean.

‘The Mandalorian’ is the first live-action series set in the 'Star Wars' universe and takes place five years after ‘Return of the Jedi’. It stars Pedro Pascal (Oberyn Martell in ‘Game of Thrones’), Carl Weathers, Werner Herzog, Nick Nolte and Taika Waititi.

Weathers and Favreau will also direct an episode each with the 'Swingers' star not getting a chance during the first season due to 'Lion King' commitments.

"We're working on season two, writing, prepping with the directors and getting ready to direct myself, actually," he told Entertainment Weekly.

We can also thank the show for introducing us all to Baby Yoda. Look at his lickle face?! 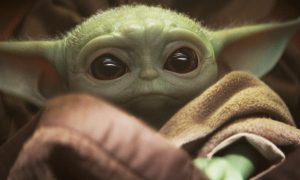 To watch the first season (and the second when it drops), law abiding Irish citizens will have to wait for Disney+ to launch here on March 31st, 2020.