Well this would have been a terrible idea.

It's ten years since The US Office's Jim and Pam tied the knot in what was a fan favourite two-part episode in season 6 of the hit show.

It saw the couple and the rest of the office head up to Niagara Falls for their wedding. The whole thing soon escalates though and fed up of all the drama, Jim and Pam head off on boat to get married in private. They return for the actual ceremony which sees the entire cast dancing down the aisle recreating a popular viral video at the time. However it turns out, one of the episode's writers, Greg Daniels had a much different ending in mind.

Speaking to EW this week, director of the episode Paul Feig said, "All throughout the episode, Roy's [David Denman] been kind of haunting around and unhappy that they're getting married, so when they ask if anybody has reason why this couple can't get married, he rides into the church on a horse to sweep Pam off her feet like a knight in shining armour and declares, ‘I have an objection,'. And she's like, ‘What are you doing? No, I want to get married.' She sends him away, so he has to ride his horseback out of the church. But then, in an absolute insane thing, they had this crazy ending where Dwight [Rainn Wilson] gets the horse and rides it into the falls."

Daniels added, "I was really committed to the horse for the longest time."

"Roy interrupts the wedding trying to do a big, grand romantic gesture that nobody wants and just abandons the horse and drives home. So Dwight gets on and goes into the river above the falls, but panics and jumps off the horse at the last second, while the horse goes over in the background of the wedding. I remember scouting this tank on the Universal lot and talking about how we’re going to shoot this horse being swept over the waterfall." 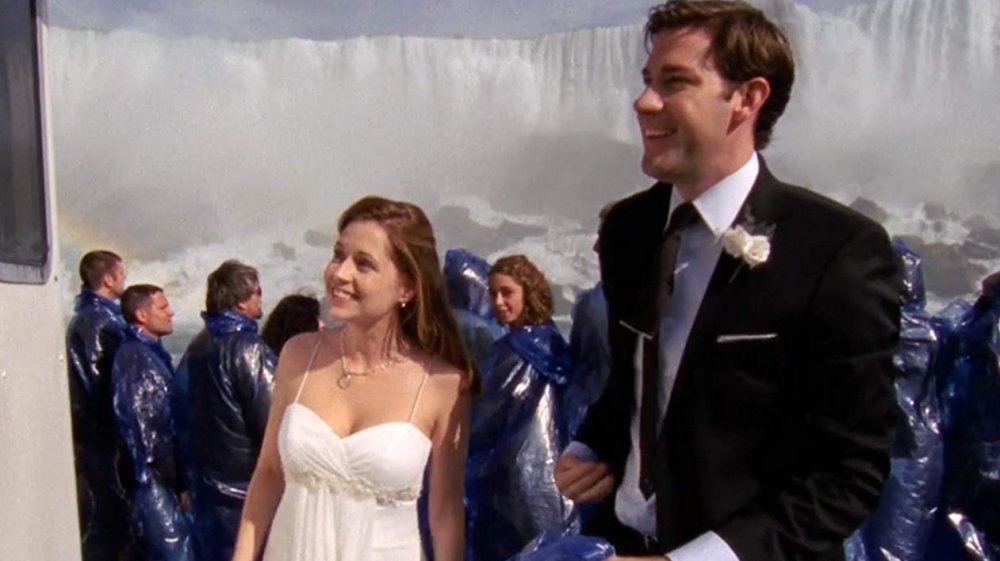 Apparently this "jump the shark" idea went all the way to the table read, when the actors and the staff begged him, "Don't ruin Jim and Pam's wedding with a horse!".

Feig said, "We were all like, 'This is insane. You can’t send a horse over the falls'. And Greg was like, 'No, it would be really funny.' And there was this whole debate that went on in the writers’ room, people are like, 'I don’t know, I think this is kind of dark and weird'."

Thankfully, Daniels backed down and a last-minute decision was made to do the wedding dance which turned the ending of the episode into what we know and love today.

Want to watch it again?

Can You Name The '90s TV Show From A Single Image?

'Fair City' to return to screens in September