Who knew Winterfell had a Starbucks?

As anyone who's lived or spent time in an urban environment, Starbucks is ubiquitous.

You can turn a corner, see a Starbucks, walk down a street, and see another one. They're everywhere - but this is getting ridiculous. Last night, we had visual confirmation that there's even a Starbucks in Winterfell.

In the banquet scene towards the first act of the episode, you'll see a scene where Daenerys looks over at Jon as he's celebrating with the warriors who survived the Battle of Winterfell. Just beside Dany, however, is what appears to be a tall-size cup of Starbucks coffee.

Here's a high-quality screenshot of the particular scene that we found on Twitter.

Computer, zoom in and ENHANCE. Boom. 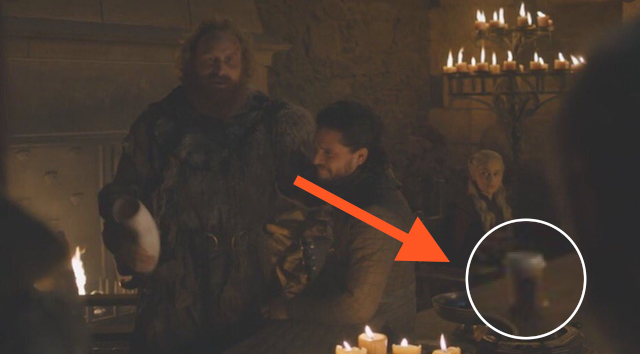 Look, can you blame Daenerys in this situation - especially if she's not a big wine drinker? Ask anyone who's a teetotaller and they'll tell you the same thing. Being around heavy drinkers - especially like Tyrion or Tormund - gets pretty annoying after a while.

So what if she wants to nip out for a decent cup of coffee after the Battle of Winterfell? She's entitled to it, we all are. Of course, the other part of this is that she doesn't appear to be using a reusable cup which, given the context of the Night King supposedly being an allegory for global warming, feels a little... pointed?

It's like, "Oh, yeah, the Night King / global warming is dead, I can enjoy this disposable cup of coffee guilt-free now." Wrong, Dany. Wrong.

Non-resuable cups are the worst and single-use plastics are destroying our oceans. Do better. You need to go and watch an episode of David Attenborough's 'Our Planet' to get a grasp on this.

Anyway, needless to say, Twitter went to town on the fact that not even Winterfell can escape the reach of Starbucks.

Dany’s Starbucks for the Throne pic.twitter.com/SAO84WIrE6

Have to be honest, always saw #GameOfThrones to be more a @DeathWishCoffee kinda of place as opposed to bland old @Starbucks - but I guess what Daenerys wants in her latte & where she wants it from is what Dany gets, but really guys? https://t.co/3WUGNZS8PM pic.twitter.com/UyZV75GEuP