Early word for The Handmaid's Tale season 3 is disappointing

Early reviews for The Handmaid's Tale season 3 are out now and sadly, the consensus isn't great.

The Handmaid's Tale season 3 airs from June 5th. Based on the best-selling novel by Margaret Atwood, it follows a totalitarian society called Gilead. Gilead is ruled by a fundamentalist regime that treats women as property of the state.

The first season aired in 2017 to widespread acclaim. Season 2 also got strong reviews.

Various publications received previews for the first six episodes of the latest season.

Kristen Baldwin of EW felt that the show is running out of new things to say about June's life in Gilead. She titled her review: "Blessed be the show that knows when to quit."

THR similarly found that while "Elisabeth Moss [is] as good as ever", the plot has become "frustratingly repetitive." Daniel Fienberg writes:

"There was a cleverness to the dialogue, especially in the first season, and Moss turned that cleverness into the escape valve laughs that the show required. Now the writers are content to just let June embellish cliches with a little swearing and call it a day, forcing Moss to get value out of limp lines like, "This is the Valley of Death and there's a fuck-ton of people to fear." 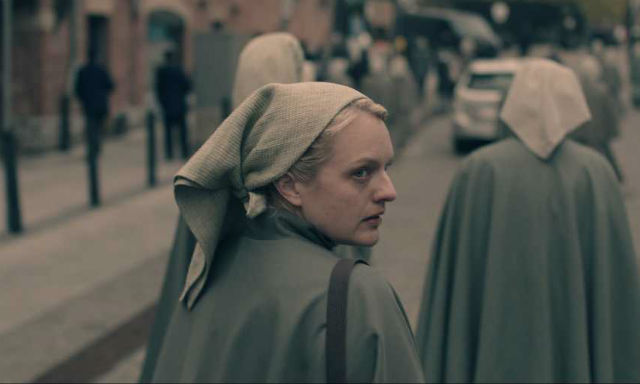 The AV Club also praised Moss. However it also found that season 3 drags: "revolution takes much too long to gain momentum."

The publication said the six episodes were too "depressing" and dragged out:

"At this point in the series, there’s little time (or viewer patience) left for episodes that do little more but spin wheels, with no repercussions, no follow-up, no actual progress in the handmaids’ subversive David versus Goliath movement."

It was optimistic that the series could improve in its second half half.

Den of Geek actually found the series less depressing than usual, giving it 4/5 stars and writing:

"The Handmaid’s Tale Season 3 dials down the horror show and focuses on the emotional reality of its characters, even if not all are exactly who they seem to be."

USA Today was also not a fan of season 2, and thought 3 was better:

"The new season is more propulsive and watchable, although it doesn't quite reach the heights of that first moving season."

Slash Film also saw the new season as an improvement on its predecessor:

"Relentlessly soul-crushing, The Handmaid’s Tale season 2 was an exercise in wheel-spinning and frustrating half measures. While the third season doesn’t fix all the issues that the sophomore season had, its shift from bleak emotional torture to a brisk political thriller is promising."

Indiewire gave the season a B grade, finding it "slower and more laborious" than previous seasons but still "compelling". Reviewer Ben Travers' general consensus was:

"Season 3 isn’t short on powerful moments (like the shot of the monument) or personal growth (like the argument had at his feet), but it does falter at times while trying to bring the two together."