Actor Johnny Ward, of 'Love/Hate' and 'Fair City' fame (Katy's kidnapper!) has been dancing up a storm on this series of 'Dancing with the Stars' so far but seems to always face tough criticism from the judges.

Last night, he relived his days in a Boyzone tribute act with an energetic cha-cha-cha with partner Emily Barker to one of the band’s hits ‘Picture of You’. 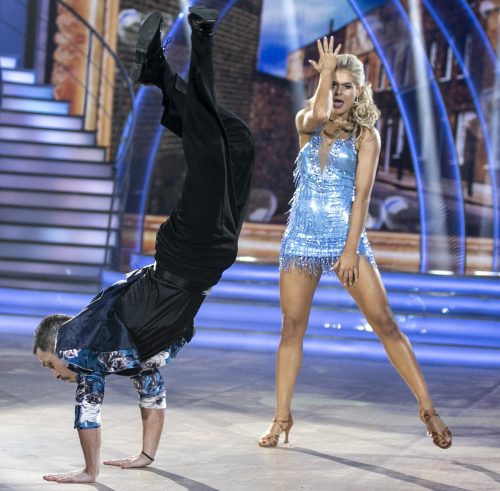 There he is now, giving it socks.

Brian said: "I'm going to sum up the sentiment... 'It ain't what you do but the way that you do it' everything is a hit on the beat but it just doesn't have enough character... really try and find the essence of each of the dances and then you have a chance of getting those really high scores."

While Loraine said: "So first i'm going to commend you both on your version of the cha cha, you are a great... you are a dancer and you have great moves... but for me the cha cha has a cuban action in it... but lifts and jumps and spits and that... it's not an authentic cha cha for me."

Johnny scored a total of 20 from the judges and folks were not impressed:

#DWTSIRL scores are an absolute joke!! @JohnnyWard7 best dancer in competition!! Judges are very easy on some dancers!!

Sick of the judges bias, Johnny Ward is being treated unfairly compared to some of the contestants #DWTSIrl

What's the story with the anti-Johnny rhetoric? As if he has anything to do with the choreography. Bizarre and almost uncomfortable to watch. #DWTSIrl You were amazing @JohnnyWard7 @emilybarkerwork

Johnny ward would have to cut one of his legs off and dance with it to please the judges. By far the most superb dancer this year. 👋🏽👋🏽👋🏽 be a sin if he doesn’t win it. #DWTSIrl

Johnny you were amazing. U are the only real dancer on this show. Well done. #DWTSIRL

Johnny is a great dancer. Judges scoring him lower & being more critical because he's the best of them. Johnny set his standard high from week one. Perhaps to his detriment? #DWTSIRL

Very harsh on Johnny and Emily, I think they're brilliant, Johnny to win! #DWTSIrl

Johnny is incredible and his scores are a travesty!! He scored less then clelia and his routine was far superior 🤬🤬🤬 #dwtsirl again the scoring makes no sense

Judging was harsh on JOHNNY #Dwtsirl

Watching #DWTSIRL for the first year but the judges clearly have favorites? Giving Johnny a 6 ??? Really!!

I just can't let it go! I made a cup of tea and had a few bickies to calm myself down but I'm still raging! The scoring of Johnny and Emily was a stunning injustice! I'm not one bit happy. What should br some nice entertainment has got my blood pressure right up! #DWTSIRL

TO EVERYONE ELSE: “Oh, you recovered wonderfully from falling over and crashing your head through the scenery.”
TO JOHNNY: “Your 5th metatarsal was indifferently aligned for that triple backflip. 4 points.”
#DWTSIRL