14 of the Best Christmas Episodes of TV Shows

Most shows have one, but not all get them as right as these do.

While we all love a good Christmas special, it's sometimes just the festive-themed episodes from a show you like that can be the best ones.

For this reason, the below doesn't feature the likes of 'Only Fools and Horses' or 'Father Ted' (who all of course have great Christmas specials) but rather the shows that move away from their normal routine mid-season to celebrate the yuletide.

From 'Friends' and 'The X Files' to 'Arrested Development' and 'Buffy the Vampire Slayer', here's a rundown of our favourite Christmas episodes of TV shows.

In no particular order...

There are so many great '30 Rock' Christmas episodes it's hard to narrow it down, but we love the first ever one which was season two's 'Ludachristmas'. It saw Liz trying to deal with her family while Kenneth tries to teach everyone the meaning of Christmas but instead they all decide to cut down the famous Rockefeller Plaza Christmas tree. Fun times.

'Community' had some great themed episodes over its six-season run but one of the standouts is season two's 'Abed’s Uncontrollable Christmas'. The show broke from its unusual format and used stop-motion animation for most of the episode which saw Abed trying to find the meaning of Christmas.

Season two's 'Afternoon Delight' sees the Bluths celebrate their company Christmas party with Gob convinced he is going to be toasted my his colleagues but is instead roasted. While there's also a very awkward performance of 'Afternoon Delight' by Michael and Maeby.

Nothing like 'Black Mirror' to send our heads spinning, and its Christmas episode a few years back managed to bring in two of the show's biggest stars to date - Jon Hamm and Rafe Spall. The two men were seemingly living in a cabin reflecting on their past mistakes, one of which was a failed relationship which led to being "blocked". As we have come to expect with 'Black Mirror' this was unsettling yet utterly compelling stuff.

Angel had a terrible time of it over Christmas in season three's 'Buffy the Vampire Slayer' as he finds himself haunted by the ghosts of Christmas past who were all people he killed during his soulless vampire days. He is told that he will be released from his pain if he kills Buffy but he can't do it so instead tries to kill himself by standing on a hill and waiting for the sun to come up. Miracles of miracles though, Buffy gets to him on time and instead of the sun coming up it starts to snow and sure it's just magical altogether. 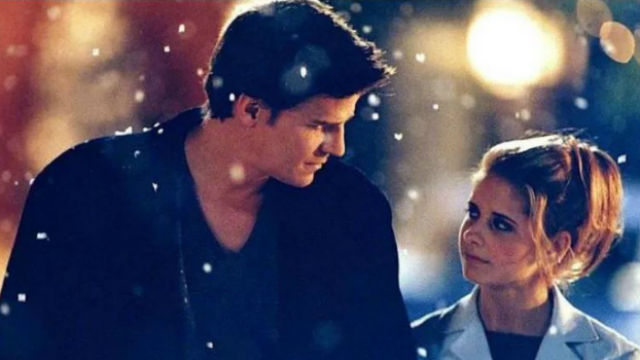 Dennis and Dee try to show Frank the true meaning of Christmas while Mac and Charlie reminisce over past Christmases which included being taught how to break into homes to steal presents and Charlie watching his mom invite a bunch of Santas/clients over. A typical Christmas for the gang really.

'Lost''s fifth episode of season four saw Desmond travelling from the island to a freighter that can hopefully take him home but in typical weird-shit-to-happen-on-Lost, he becomes unstuck from time and his consciousness travels between the present of 2004 and 1996. In order to save himself, he needs to find a constant in both those times and lands on the love of his life Penelope Widmore. He tracks her down in 1996 and tells her to answer her phone on Christmas Eve 2004 — the day he arrived on the freighter. And she does. And it's probably the best moment of the entire show.

Okay so this was an actual Christmas Special separate from the series but given that it was the last ever episode, we're counting it. And because Tim returning to the party to finally kiss Dawn made everyone's Christmas back in 2003.

A similar moment but done differently. Jim and Pam's love story grew into a central plot of 'The US Office' over the seasons, but it really all began with this Christmas kiss.

Mr. Hankey has shown up plenty of times in 'South Park', but his first appearance was in the ninth episode of season one. He comforts Kyle, who can't celebrate Christmas, with probably one of the catchiest festive songs of all time. Apologies in advance for getting it stuck in your head.

Another show that had some great Christmas episodes but one of the most powerful has to be Noël, which saw Josh come to terms with the fact that he had PTSD. Shout out to season one's 'In Excelsis Deo' too.

Mulder and Scully investigate a house that is haunted by a couple every Christmas Eve. The pair play mind games with the detectives, trying to get them to kill each other, but sure there's no fooling those two - most of the time. It all ends with a rare heartwarming moment on the show as they exchange Christmas presents.

Nearly every season of 'Friends' had a Christmas episode so it's hard to pick the best. The holiday armadillo? The one where they buy all the trees for Phoebe so they can fulfill their Christmas purpose? Or perhaps the episodes where they head straight to New Years and had that supposed dateless party or in later seasons, Monica and Ross's cringe-worthy dance routine. A lot to choose from, but our favourite is the one where Phoebe tries to track down her dad with Chandler and Joey, while Rachel is still reeling from Ross's pros and cons list. The highlight however is the post-credits scene with Joey and Chandler giving out their gas station Christmas presents.

14. The Simpsons - 'Simpsons Roasting on an Open Fire'

Like 'Friends', there's a lot to choose from, but we all know which one it is, and it happens to be the very first episode of the show. 'Simpsons Roasting on an Open Fire' saw Homer realising he won't be getting his Christmas bonus so secretly gets a job as Santa at the mall. When he realises that doesn't pay enough, Homer and Bart head to the dog-racing track on Christmas Eve in the hope of getting some money for Christmas, but instead, they get something much better, adopting an abandoned greyhound who they name, well you know already, Santa's Little Helper!

Disney+ launch date moves up - here's what it costs