'If Memory Serves' does a decent attempt to clean up the messy lore surrounding the original series, and does it with intelligence and humour.

As far as timelines and parallel universes go, 'Star Trek' is a slightly messy one.

But at the very start of the series, there was a pilot episode called 'The Cage' - which saw the original captain of the Enterprise, Christopher Pike, set down on a planet called Talos IV where giant-headed aliens were able to project illusions into people's minds. 'The Cage' was never considered part of the canon of 'Star Trek', and scenes from it were reused for a later episode in the original series called 'The Menagerie', where Spock - out of loyalty to his former captain, Christopher Pike - took him to Talos IV where he would be reunited with Vina, a human who had survived on Talos IV and was essentially their human emissary.

Why are we bringing this all up? Because 'If Memory Serves' opens with a mish-mash of scenes from 'The Cage' and 'The Menagerie', and then cuts right into Anson Mount - who's taken over from Jeffrey Archer in the '60s - as Captain Pike. It's a fun little gag, but it serves as a way of tying up the messiness of 'Star Trek' and gives us a context for Pike's relationship with Talos IV.

'If Memory Serves' also blends in with the overarching story of this season, the idea of faith being based on what we can see and feel and understand, versus what we even know of reality. Vina, played by 'Grey's Anatomy' alum Melissa George, is revealed as being a projection of health and beauty - and that it feels as real as she needs it to feel. It's pretty heady stuff, especially when it delves into Vina's relationship with Pike - that itself is an illusion, but one she understands and accepts as enough for her.

This neatly dovetails with the deteriorating relationship with Stamets (Anthony Rapp) and Culber (Wilson Cruz), the latter being unable to cope with his new body and the fact that he's supposed to be dead. Culber's return from certain death is a dream that Stamets had every night, and now it's come true. The truth, of course, is that Culber doesn't know his own mind and body - and Stamets' continued forcing of their relationship is driving them apart even further. In one instance, you've got an illusion that gives comfort, and the other is an illusion made real, and it's causing pain and strife. 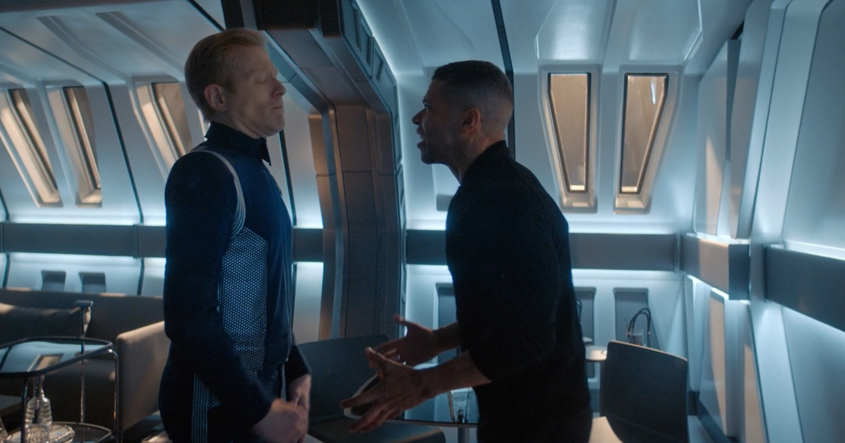 What 'Star Trek' has always done well across its fifty-odd years on television is delve into not just psychology, but relationships that can't be easily quantified or navigated easily. Take Jean-Luc Picard in 'The Next Generation', for instance. Never married, never had any children, but we know that he himself had a rich life of harmony - in an illusion, if you like - in classic episode, 'The Inner Light'. Likewise, Benjamin Sisko in 'Deep Space Nine' lived his life not realising that his mother was possessed by the Prophets when he was born, and that he himself was a widower.

'If Memory Serves' rolls through the relationship between Spock (Ethan Peck) and Michael (Sonnequa Martin-Green) and gives context to not only why it is that they fell out so dramatically, but why Spock himself has been driven mad by the Red Angel. In a nutshell, Spock tried to mind-meld with the Red Angel and, because of its suit and its ability to travel across time, drove Spock crazy as linear time was the bedrock of his sanity. By bringing Michael to Talos IV, Spock was able to use her as a guide for his memories and the Talosians' ability to shape reality and control minds was needed to get him back on track.

Basically, it was one giant therapy session for them both, and they both came out the other side of it. The writing by Dan Dworkin and Jay Beattie really delved into it, and made for one of the most satisfying episodes of the season so far. With Spock returned to normal by the end, and the Discovery crew now fugitives from the law because they dared to come near Talos IV, the second half of the season is set for up for something special.

Let's hope they don't blow it.

Netflix space series 'Away' gets a full trailer

11 of the best YA movies on Netflix right now