Review: Fans of ‘Sabrina’ and ‘Teen Wolf’ will love Netflix’s ‘The Order’

Another teen drama from Netflix that’ll keep you entertained

Netflix’s new monster series ‘The Order’ bears more than a little resemblance to other teen dramas such as ‘Teen Wolf and ‘The Chilling Adventures of Sabrina’.

If that sounds like a winner to you, then by all means give ‘The Order’ a watch. The new Netflix series sees high school graduate Jack Morton (Jake Manley) achieve a scholarship to Belgrave University where he discovers that there just so happens to be more than one secret society taking place on the college grounds. Quite quickly, Jack becomes a member of the historic secret magic society, The Hermetic Order of the Blue Rose, and begins to unravel all of the secrets that lie within the magical cult.

Not only that, but he also stumbles upon another mysterious society, The Knights of Saint Christopher, who are the sworn unknown enemy to The Order. The Knights just so happen to be a pack of teenage werewolves. The first few episodes involve a back-and-forth of Jack deciding which society to be a part of, or to bite the bullet and juggle both. And also try to study (which rarely seems to happen).

The best way to describe the series, is a mixture of many different TV shows all wrapped up into one and repackaged as ‘The Order’. Elements of ‘The Magicians,’ ‘Buffy the Vampire Slayer,’ and as the previously stated ‘Teen Wolf’ and ‘Sabrina’ are ever-present. It’s unfortunate really, because ‘The Order’ has so much potential to stand-out against the rest, but fails to execute the landing. These other TV influences are easily more watchable, and less convoluted than what we have here. Even down to the fact that the magical Order wear mysterious face masks has been done countless times on screen. Nothing about the series really feels all that fresh.

When we first meet our main character Jack, he is unbelievably annoying; almost to the point where you think - can I actually continue to watch this? He comes across as very arrogant, unlikeable, and the series oozes (dare I say it) overly-American tropes to have to watch for nine more episodes. However by episode three, Jack’s outlandish character traits have lessened greatly, and he becomes much more likeable. The rest of the young cast are all fine actors and actresses, playing the typical high school archetypes you’d expect - the spoilt one, the jock, the moody one etc. As the series goes on, the storyline and the characters do thankfully become less meandering, and the series eventually begins to find its feet. 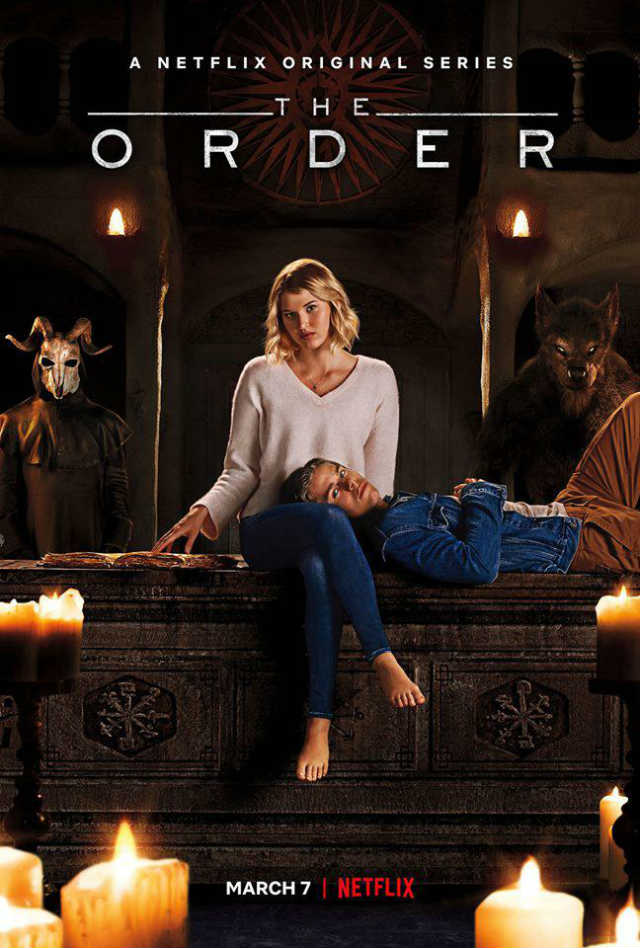 Poster for Netflix's 'The Order'

While ‘The Order’ offers nothing substantially new or original by any means, it does poke fun at everything that has come before it. For example, when using magic as part of The Order, all spells cast must have a payment of sorts. A payment can take the form of a blood sacrifice for example, or time; but if there is no sacrifice made, then it can get messy and unfortunate events begin to happen. A throwaway remark here, the use of a twig as a wand there, and the series does get some laughs by paying tribute to the spell-casting fandoms of ‘Harry Potter’ and ‘Sabrina’.

If teen dramas involving werewolves, vampires, and dark magic are your forte then ‘The Order’ should be right up your street. There are numerous twists and turns that will keep you guessing, and the series is an easy one to binge-watch on Netflix. Having said that, it is by no means original, but takes a decent stab at the teen genre which some might find interesting. Whether the series returns for a second season still remains to be seen; if it does, it would be great to see it come back with more of a presence that sets it apart from its competition.