Details of the 'Breaking Bad' movie have leaked online

The 'Breaking Bad' movie has been wrapped up in secrecy since it was announced earlier this year, although this shouldn't come as a surprise to anyone who watched the series.

Vince Gilligan, the creator of 'Breaking Bad' and its showrunner, had a knack for keeping details tightly under wraps through the show's history - so it'd make sense that this extends to the movie sequel as well. While no release date has been confirmed, nor has any poster or trailer made its way online, the only bit of information - up until now - came from Bob Odenkirk, who confirmed that the movie had completed production. 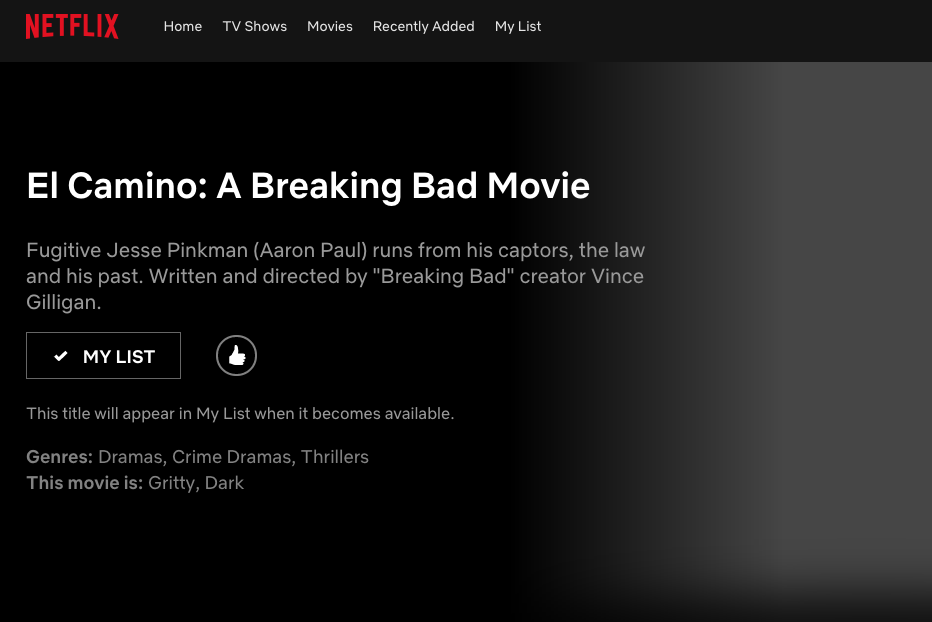 The Netflix page for 'El Camino', which disappeared off the streaming service earlier today.

Anyway, the title doesn't really tell us a huge amount, but it does have a tie-in with the final episode. When Jesse escaped the Nazis after Walter shot up the place with his machine gun, he drove off in an Chevrolet El Camino, which is where the title comes from. Not only that, 'El Camino' means 'The Way' in Spanish.

As well as this, the Netflix page also confirmed the runtime as two hours and two minutes - but no details about when the movie will land on Netflix, or much of anything beyond confirming Aaron Paul as the star and Vince Gilligan as writer and director.

For now, anyway, we'll just have to sit and wait.