A couple of familiar faces turn up on this week's episode.

One of the most enjoyable parts about 'The Mandalorian' has been how it separated itself from the rest of the franchise so cleanly.

The tone, the characters, the time period in the universe, it's all fresh and new - even if we're dealing with a baby-faced version of Yoda in each episode. Here and there throughout the first season, there's been a glancing reference to the wider galaxy, but this season has clearly seen a more concerted effort to push the story outwards.

The opening episode introduced Cobb Vanth, the former custodian of Boba Fett's armour, and while that may have been largely symbolic, this week's episode is far more pointed. Initial speculation from the trailers was that the character WWE star Sasha Banks appeared to be was a Jedi, yet we now know from this episode that this is not the case.

After (splash)landing on Trask with the frog lady and her delicious batch of eggs, Mando and Baby Yoda find themselves trapped by Quarrens trying to get their mits on his valuable armour when, out of the blue, three fellow Mandalorians turn up and save the day. The surprise comes when they all remove their helmets, yet are surprised when Djarin / Mando refuses to do so, identifying him as a 'Child of the Watch'.

Now, this is where we need to put on our 'Star Wars' uber-nerd glasses and do a little bit of exposition as to what all this was. To be fair, the episode does a good job of giving the bare bones of it later, but here's the gist - the Mandalorians, as you can expect of a cult that prides itself on their ability to kill people, are a fractuous bunch. There are those who adhere to the ancient rules, known as the Death Watch. This is our Mando's group, while the group of three Mandalorians we see are led by Bo-Katan of the Clan Kryze. This character originally turned up in the animated 'Clone Wars' series, and was voiced then by Katee Sackhoff - who just so happens to be playing her this time around too.

Basically, there was a lot of in-fighting with the Mandalorians, and Bo-Katan is now attempting to restore the planet Mandalore to their people with herself as a ruler. This all plays in the background to the action, which is expertly staged and choreographed, not to mention giving the likes of Sasha Banks a chance to flex her action chops and confirming Bryce Dallas Howard as a director who can take to any genre or scenario with ease. Yes, it may be a linear approach, but seeing the four Mandalorians blast their way through a sea of Stormtroopers is a satisfying moment, not to mention seeing Titus Welliver in an Imperial officer's uniform is a trip. 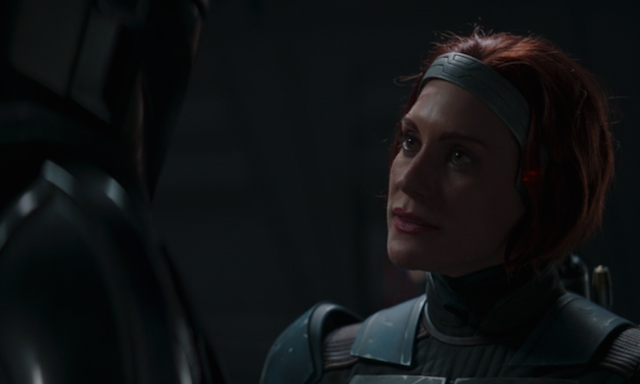 As intriguing as it might be to see Mando / Djarin get involved with the Mandalorian liberation, Bo-Katan points him as promised to the character that's been hinted at and rumoured for some time - Ahsoka Tano. Not a surprise, of course, but the fact that the character's name has been said out loud and confirmed is a relief.

One of the complaints with the last season was that while it was filled with action, scenery, movement, and explosions, each episode didn't particularly slot together and it was closer to episodic television than anything else. This time around, you can see that there's a push more towards a serialised story, and to Jon Favreau's credit, if he's pumping the brakes in last week's episode, he's hit the accelerator on this episode.

Katee Sackhoff's performance as Bo-Katan feels confident, assured, and convincing. It's not easy to translate a character from a voice role to a live-action role, yet Sackhoff clearly understands this character and is able to introduce it to those who may not necessarily be familiar with her.

All in all, 'The Heiress' is a strong episode and the action sequences are well-directed, not to mention the performances by guest stars Sackhoff and Welliver are all at the right tempo. The big question now, however, is will it be Rosario Dawson in the role of Ahsoka Tano like has been reported multiple times already? And when will Michael Biehn enter the story?

MCU fans are getting themselves prepared for the 'WandaVision' finale

'Tom Clancy's Without Remorse' starring Michael B. Jordan gets trailer

Disney+ review: 'Love in the Time of Corona' is cheesy nonsense