The career of Galway actress Nicola Coughlan is on the up and up.

She made us laugh until we cried as Clare Devlin on the two seasons of 'Derry Girls'. Last week, she wowed Graham Norton's guests with her Nadine Coyle impression.

Next, Nicola Coughlan stars in 'Bridgerton', the much anticipated Netflix series. She was the first actor to be cast on the show. Her character is named Penelope Featherington.

"Penelope is a young girl who is a member of high society but feels very much like an outsider," Coughlan says.

"We see her in her first year debuting, meeting the queen and going to balls; and she feels completely uncomfortable about it. She's a wallflower, she stands at the back and doesn't dance with anyone. 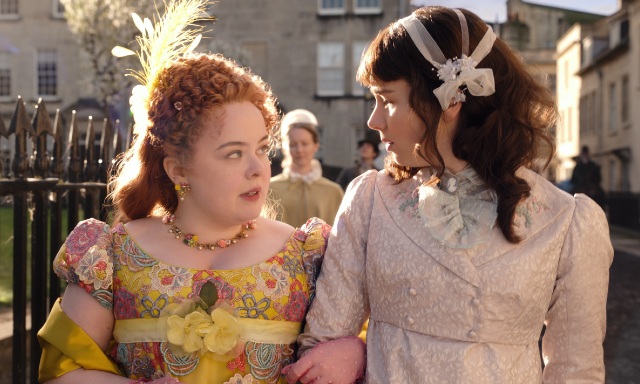 "But she's a fascinating character because she starts off very innocent but goes on this amazing journey in the series which really changes her.

"She's also very clever and quick witted, and you see that when she's with her best friend Eloise. She's also a real romantic, when you see her around Colin Bridgerton. So she's got many, many sides to her."

Comparing her 'Bridgerton' role to her 'Derry Girls' character, Nicola Coughlan told us: "I like to go from one thing to another that's quite different. I think that's the joy of acting, getting to play lots of different roles. Penelope and Claire are really worlds apart.

"Claire is super high energy and says everything that's on her mind, whereas Penelope rides a steady wave, but she observes everything, she takes everything in. And going from comedy to a drama is a dream, really, I feel so lucky with the parts I've gotten."

'Bridgerton' is streaming on Netflix from Christmas Day.