Watch: Photographer gets up close and personal with a huuuuge Great White Shark

We've all seen Jaws, which has scared us out of the water forever and taught us a valuable lesson about not getting anywhere near giant sharks. Australian filmmaker Dave Riggs clearly didn't learn that lesson.

Recently, when filming for a new documentary with his production company Riggs Australia near the Neptune Islands, South Australia, he got a visit from one of the local wildlife, who was pretty curious about what was going on.

Riggs managed to snap a picture just as that member of the local wildlife, which happened to be a giant great white shark that popped up to check out the boat and the people on it, just to see what was going on. 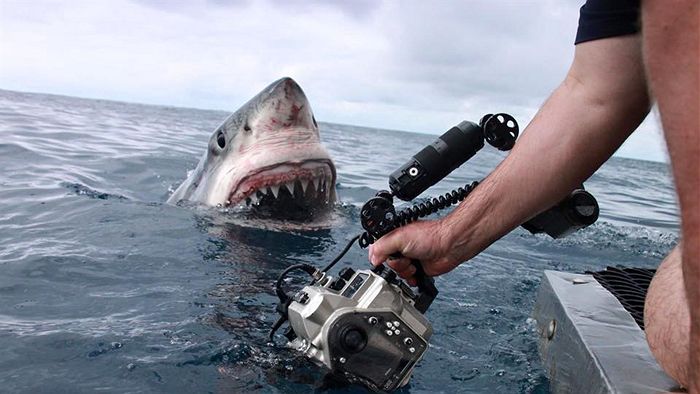 Speaking to the Australian Broadcasting Corporation, Riggs stated that the shark was "just very curious" and that "she was around 15 foot long, and wasn't being aggressive, believe it or not, but certainly looks like it in that image. But that's how they assess their surroundings."

He also added that he wanted to post the picture to show that great whites are not huge, aggressive killers:  "It's like any top-of-the-line, apex predator; you grab a cat by the tail and give it a pull and see what happens... all animals are aggressive in their own way, and great whites just happen to have very sharp, pointy teeth". That might be the case, but we're happy to keep our distance, Dave.

Andrew Garfield lied to Emma Stone about his 'Spider-Man: No Way Home' involvement