Seven conspiracy theories that turned out to be real

What with The X-Files returning to our screens and both the previous and the current season of True Detective exploring some very weird ritualistic cults, it seems as though public imagination has sparked a flurry of interest in weird conspiracy theories.

Sure, they're usually more or less dismissed as crackpot theories by weirdos who live alone with too much time on their hands - but what if some of them turned out to be true?

It's an old saying that the truth is weirder than fiction and, in some cases, that's actually the case.

Here's a few wild conspiracy theories that actually turned out to be true.

7. OSAMA BIN LADEN WAS CONNECTED TO ONE OF THE LARGEST CONSTRUCTION COMPANIES IN THE WORLD

He's dead now, but before he died, Osama Bin Laden was a very wealthy man. Sort of. The terrorist leader was a member of the Bin Laden family, who oversaw a multinational conglomerate worth billions and billions of dollars. Osama's father, Mohammed bin Awad bin Laden, had TWENTY-TWO wives and countless sons and daughters from them. The group, Saudi Bin Ladin Group, was founded in 1932 when they received contracts to refurbish mosques in the newly formed Kingdom of Saudi Arabia. Osama, born in 1957, inherited approximately $22 to $30 million - most of which, he poured into his terrorist organisations.

The Saudi Bin Ladin Group is still a thing today and just recently won a contract to build Jeddah's Kingdom Tower, the tallest building in the world. Oh, and he was a fan of Arsenal.

6. SCIENTOLOGY CONDUCTED THE LARGEST INFILTRATION OF THE US GOVERNMENT IN ITS ENTIRE HISTORY

Oh, those wacky Scientologists. Always up to something. However, in the '70s, they really were up to something. Operation Snow White was a massive criminal conspiracy by the Church of Scientology to purge any and all unfavourable comments or records on itself and its founder, L. Ron Hubbard. Throughout the '60s and '70s, Scientology was coming under attack from the US government in the form of raids by the FDA, audits by the IRS and FBI agents investigating their activities. Hubbard decided they needed to fight back and came up with, wait for this, Guardian Order 1361. This was the basis for Operation Snow White and essentially called for the destruction of erroneous records and files on Scientology held by the US government. Hubbard believed that Scientologists should take on menial duties in the government, acting as bodyguards, secretaries, whatever - and begin stealing and destroying documents. It worked, too. Two Scientologists, Gerard Wolfe and Michael Meisner, joined the IRS as typists and began making copies relating to the tax-exempt status of Scientology. One Scientologist joined the US Coast Guard while another got a job at the DEA. Files were stolen, illegal copies of sensitive documents were made and plots were made to discredit politicians unfriendly to Scientology and more.

By July 1977, the game was up. The FBI conducted a massive raid on Scientology's headquarters at Los Angeles, Washington and Hollywood. The LA raid consisted of 156 agents - the largest ever mounted for a single raid in the FBI's history. In 1979, eleven high-ranking Scientologists - including L. Ron Hubbard's wife, Mary Sue Hubbard - were sentenced to five years in jail. L. Ron Hubbard went on the run shortly after this and, during this time, he wrote Battlefield: Earth. Yes, that film that starred John Travolta that's considered to be one of the worst films ever made.

5. BRITAIN HAD A PLAN TO INVADE IRELAND IN THE EVENT OF NAZI OCCUPATION DURING WORLD WAR II

Known as Plan W, it was intended as a response to Nazi Germany's plan to invade Ireland and use it as a staging area for the Luftwaffe's attacks on Britain. Churchill had made several offers to DeValera to give back the Six Counties if Ireland joined the Allied effort against the Nazis, however DeValera believed it would cause another civil war in Ireland. There was a real belief in British political and military circles that Nazi Germany could invade Ireland quite easily, with some believing that DeValera could side with the Nazis if an advantageous offer was made to them. The Abwehr, Nazi Germany's intelligence service, had several contacts with the IRA and were using them for information on the ground.

Plan W, however, was developed between Ireland's G2 - our intelligence service led by Col. Liam Archer (yes, we had a spymaster named Archer) - and British counterparts. Simply put, Plan W would have seen Ireland invaded by British forces from all corners, with Ireland's armed forces conducting partisan operations to help repel the Nazis. The Desert Rat, General Montgomery, was told by the British authorities to plan a way of retaking Cobh and other ports in Ireland. Naturally, of course, none of this came to pass and we sat out World War II as a neutral party. That didn't stop us from offering condolences to Nazi Germany when Hitler topped himself, though.

4. AREA 51 IS REAL AND YOU CAN FIND IT ON GOOGLE EARTH

Area 51's been at the centre of hundreds of thousands of conspiracy theories. In fact, SkyLab - the first US space station in the the early '70s - was specifically ordered by the CIA to NOT take pictures of Area 51. GoogleEarth, however, managed to take a glimpse at it. In fact, when you're on Google Earth and you try to StreetView the area, the little yellow-man icon comes up as a UFO. So what is Area 51? Simply put, it's the US Air Force's research facility. It's believed the F-117A Nighthawk had its first flight over Area 51, as did the U2 spyplane and several other recon planes. Photography is prohibited in the general region and the US Air Force is allowed to shoot trespassers and photographers who don't adhere to their rules on sight, thanks to the McCarran Internal Security Act. Yeeshk.

3. THE CIA CONDUCTED MIND-CONTROL EXPERIMENTS ON PEOPLE WITH LSD AND PSYCHEDELIC DRUGS IN THE '60s

MKUltra isn't just the name of a crap album track by Muse, y'know. It was also the name of a CIA project that involved the testing and usability of LSD and other psychotropic drugs on usually unsuspecting people. It's believed that anywhere between 40 and 100 institutes and official bodies were set up as fronts for the CIA to conduct experiments. In some cases, they laced glasses in restaurants or cafes with LSD to see what would happen. In one instance, they infiltrated several brothels and set up recording equipment with one-way mirrors to see what happened when men were dosed with LSD unsuspectedly. In other cases, they found heroin addicts and bribed them with more heroin if they tried LSD. So, why LSD? At the time, the CIA believed that the drug could be used to alter a person's loyalties or, in some cases, completely brainwash them. The understanding was was the Soviets were conducting experiments of their own and they had to match them if they wanted to win the Cold War.

It wasn't all just LSD, however. One particular CIA-funded doctor, D. Ewen Cameron, put his patients - without their knowledge - into drug-induced comas for the purposes of extracting information from them against their will. It didn't work, obviously, and the patients were left with long-term damage. In some cases, they were unable to remember their names, thinking their interrogators were their parents and incontinence. Yes, incontinence.

2. ONE OF THE FOUNDERS OF FINE GAEL WAS A FASCIST WHO TRIED TO JOIN THE NAZIS

That'd be Eoin O'Duffy, the second man to hold the position of Garda Commissioner. A veteran of the War Of Independence, O'Duffy became active in Cumann na nGaedheal, the precursor to the current Fine Gael, and founded the Army Comrades Association, later known as the National Guard. Their job was to provide protect for party meetings which were being attacked by former IRA members. O'Duffy was a big fan of Benito Mussolini, the Fascist leader of Italy, and even adopted the straight-arm salute for members of the National Guard. They were known by their distinctive blueshirts, which incidentally, is the derogative nickname for Fine Gael and where the Gardai get their blueshirts from. O'Duffy planned a massive parade to commemorate the death of Michael Collins and Arthur Griffiths, two heroes of Cumann na nGaedheal and the Blueshirts.

The move was intended to incite support for the National Guard in the same way Mussolini's March on Rome did. Afraid that they'd become too popular and overthrow him, Eamonn DeValera banned the parade and declared the National Guard to be illegal. O'Duffy, expelled from Irish politics, tried to contact the German consulate in Ireland with an offer to join the Nazi assault on Soviet Russia. Yup. That guy was one of three founding members of the current ruling party in Ireland.

Yes, that's a crowd of people at a Blueshirts rally in Charleville, Co. Cork, giving the Nazi salute.

1. THERE REALLY IS A SECRET MEETING IN CALIFORNIA THAT WORSHIPS AN OWL THAT'S ATTENDED BY FORMER PRESIDENTS, BUSINESSPEOPLE, ETC.

Bohemian Grove is an annual retreat in California's Redwoods Park and sees the likes of former US Presidents and powerful executives meet in a truly clandestine fashion. The Grove, as its known colloquially, is described as an art's club for men that was first founded in 1878 by Henry Edwards. A noted stage actor who was planning to leave San Francisco for New York, he held a raucous party in the forest that soon became the talk of society. Eventually, the annual retreat grew in popularity and reached notable politicians, businessmen and so on. To date, there have been only four women members of the exclusive club - though many have tried to infiltrate the ranks. So what actually goes on in Bohemian Grove? Nobody's really sure. The club's motto is 'Weaving Spiders, Come Not Here' - which is meant to signify that businesspeople and politicians should leave their work and troubles behind.

One journalist, who somehow managed to find his way, said that it was a debauched party. He remarked that he saw some of the most powerful people in the States openly drunk and urinating into bushes, with cigars strewn everywhere. There's more - each year, a ritual takes place where they hold a huge bonfire in front of a 30-foot owl statue. There's even a wood carving of a robed figure with his finger over his lips that stands at the edge of the lake on the grounds. It's supposed to inspire secrecy about what goes on in the Grove. Don't worry, though. Despite their being many powerful members, one former US president wasn't a fan - Bill Clinton. When asked about it by a heckler, Clinton replied, "The Bohemian club! Did you say Bohemian club? That's where all those rich Republicans go up and stand naked against redwood trees, right? I've never been to the Bohemian club but you oughta go. It'd be good for you. You'd get some fresh air." DAMN BILL, YOU ICE COLD. 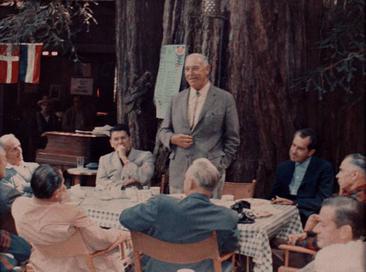