Share
Veteran actor Tom Jordan, who played Charlie Kelly in 'Fair City' since its first episode in 1989, has died at the age of 82.
Jordan was born and raised in Dublin but had moved to Co. Roscommon in recent years with wife Julie. 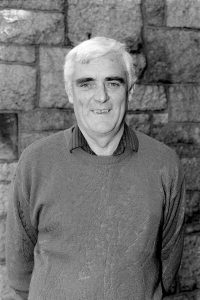 Tom Jordan during 'Fair City' shoot (1989)
Tributes have been pouring in from many of his 'Fair City' colleagues.
"This is devastating news," said executive producer Brigie de Courcy.
"Tom Jordan was the heart of Fair City. He played Charlie Kelly from the very first episode and was a huge part of our plans for the future. A consummate actor, and a strong advocate for his colleagues across the industry, he will remain a legend for the viewers and for everyone who had the privilege of working with him. Our thoughts are with his family at this very sad time."
One of Tom's 'Fair City' colleagues, Jim Bartley, who plays Bela Doyle, had this to say:
"I've known Tom for 40 years, and he was a big part of my life. Myself and Tom shared a dressing room in Fair City for nearly 30 of those years, since 1990 and they were a great 30 years," he said. 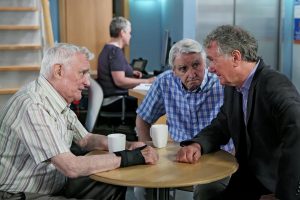 Tom Jordan as Charlie Kelly, Jim Bartley as Bela Doyle and Bryan Murray as Bob Charles in 'Fair City' (2017)
"We'd discuss everything from the meaning of life to the profession we work in together over a pint, and he was one of the best friends I've had in the business. I'm going to miss him, and his Fair City family will miss him. He was such a steady part of the show, and he gave Charlie such credibility and life.  My thoughts are with his wife and family."

Other 'Fair City' co-stars were also quick to pay tribute.

So very very sad to hear of Tom Jordan ’s passing. A wise mentor both on & off set. A pillar of strength. Was an honour to work alongside you. My thoughts & prayers to him & his family ✨ #TomJordan pic.twitter.com/OgecCoUf3P

RIP Tom Jordan. An incredible actor and mentor. My thoughts are with his family. pic.twitter.com/Fe4qmjb6TZ

May he rest in peace.