We checked. It's a real thing. And it really is sold out.

You might be thinking to yourself that you've accidentally clicked on a link for a satirical website.

Gwyneth Paltrow, when she isn't consciously uncoupling from bland singers or forgetting what movies she's been in, runs Goop. If you're not familiar with Goop, count yourself lucky and be on your merry way.

For those who are, you'll know that the site / lifestyle brand / whatever is known to sell some truly bizarre stuff and it doesn't come any weirder than this. Initially, we thought this was just some crackpot stuff that pops up on right-wing corners of the internet as an example of Hollywood liberal hypocrisy and decadence.

Of course, seeing as how we're journalists and stuff, we investigated and yes, as a matter of fact, it's very much real. Goop was, as of last night, selling a candle labelled 'This Smells Like My Vagina' and it is currently sold out and unavailable for purchase on Goop.

Here's a screenshot from Goop.com to confirm our story. 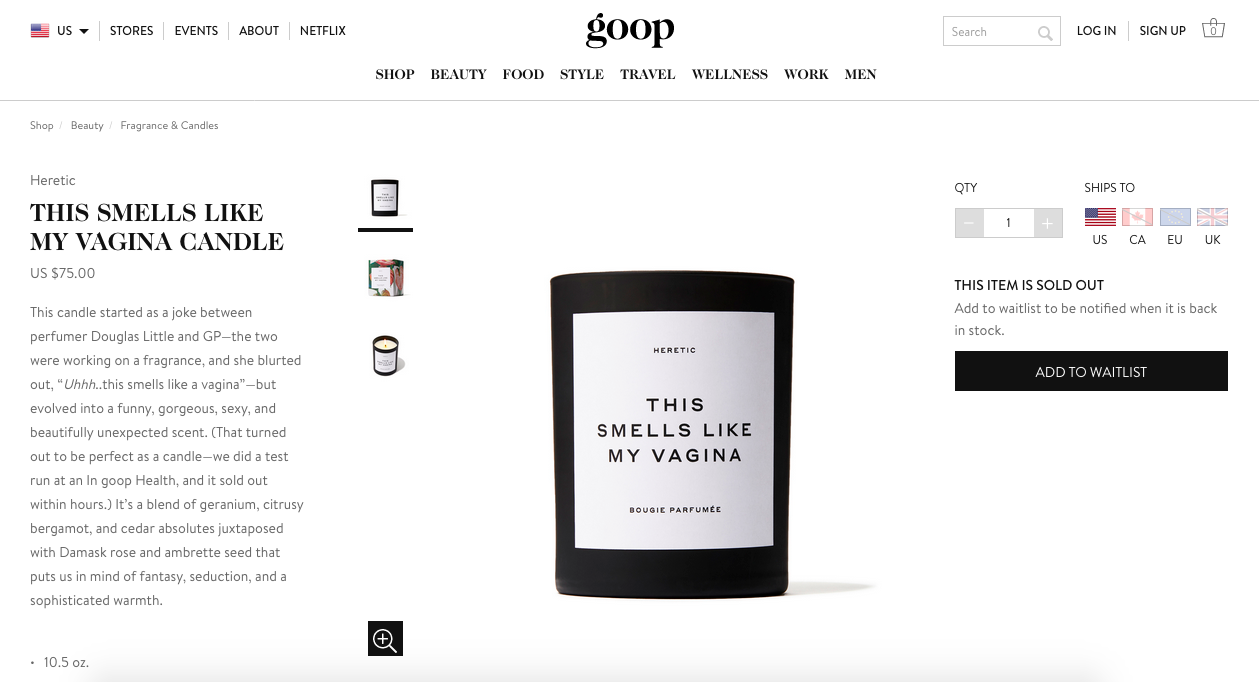 This is not a joke, but an actual screenshot from Goop.com that backs up the headline.

Like so many things on Goop, of course, it turns out to be complete and utter bullshit. Judging by reports from those who have actually spent money on the candle, it smells nothing like a vagina, even one belonging to Gwyneth Paltrow.

The candle, on Goop where Paltrow is referred to as GP in all copy, got its name from when she apparently blurted out the statement during a test-run of the fragrance. That fragrance, per Goop's flowery advertising speak, smells of "a blend of geranium, citrusy bergamot, and cedar absolutes juxtaposed with Damask rose and ambrette seed that puts us in mind of fantasy, seduction, and a sophisticated warmth."

That must be an incredible-smelling vagina.