Popular satire site Waterford Whispers have a way with words, and it seems that they're so convincing they were able to cause a bit of a stir all the way over in Germany.

An article published by them yesterday that detailed a fictional stampede at Lidl as a result of a second checkout opening was not only popular here in Ireland, but it made it all the way to Germany, where it seems the humour didn't translate.

The "report" claimed that 30 people were injured in the store in Dunboyne, Co. Meath as there was a rush for the second checkout as it opened up to serve them.

As with everything they publish, it was intended to be funny, but German website focus.de took it at face value and published a story about the scenes of panic in the shop. Although they later recognised their error and changed their headline to reflect that it was satire, they originally ran with a headline that suggested it was the real deal. 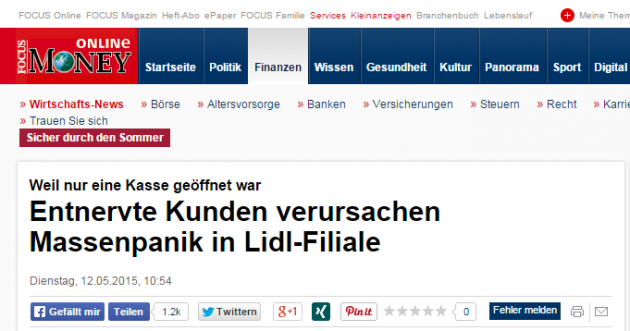 Pic via The Journal

Roughly translated, the headline reads "because only one checkout was open, angry customers cause mass panic in Lidl branch" (thanks Google translate!).

Focus refer to themselves as the magazine for the "urban elite" in Germany and has a circulation of over 550,000, so Waterford Whispers can be very proud of themselves indeed. Or maybe worried that they're getting "too real"...?

Jason Momoa and wife Lisa Bonet split after 16 years together