New data examining the levels of inequality in Ireland has shown that the gap between the rich and poor in this country is growing to unprecedented levels.

The figures, brought together by the think tank Tasc, look at the level of inequality in Ireland and identify it as a threat to the economy, warning that if things don't change, then we may well be headed the way of the United States.

Using that data, The Irish Times put together these graphs that show the startling rise in the income of the top 10% and the top 1%, in comparison to the rest of the population in the past few decades. 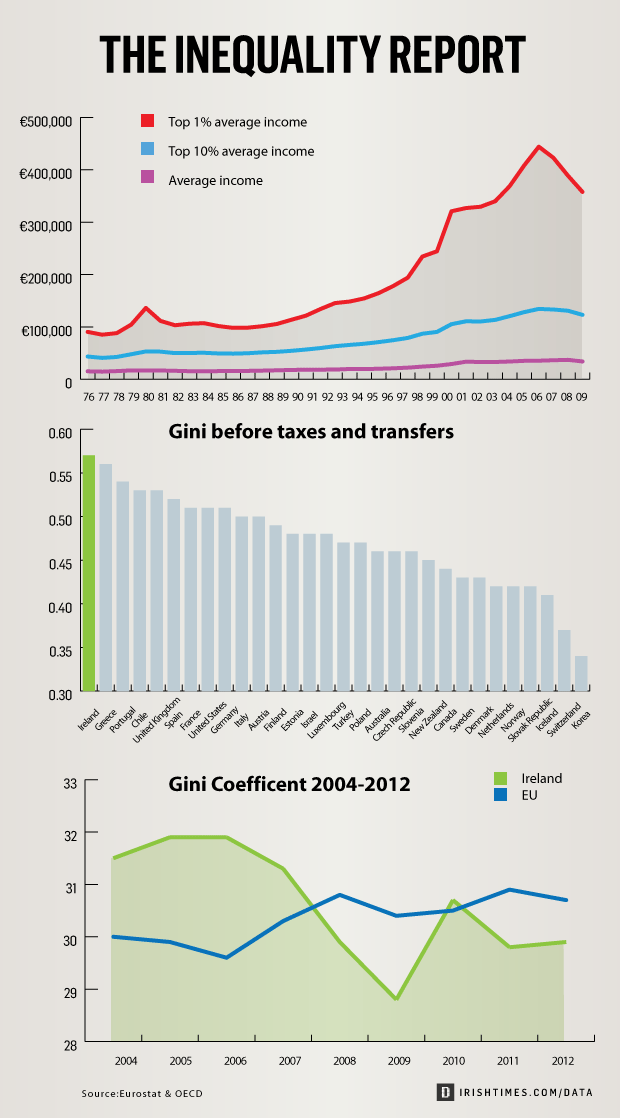 While The Irish Times point out that this data is following a general trend of more money being concentrated in fewer hands globally, there is cause for concern over the increasing size of the gap here at home and the speed at which things are changing.

This clearly highlights that there is a growing level of inequality in Ireland, but how bad is the picture really? Measuring inequality can be done by looking at the distribution of income before taxation or social welfare come in to play, and if we go by this metric alone, then Ireland would be the most unequal country "in not just the EU, but the OECD", as seen in the middle table.

However, that does not show the complete picture (although it is a worrying stat) as tax and social welfare do help to combat inequality. The Gini coefficient, which expresses inequality as a number between 0 and 1 with the latter being the most unequal) paints a slightly better picture as seen in the final chart in the series. While the coefficient took a huge hit around the time of the crisis, it has been on the rise again since 2009.

As things are at the moment, Ireland's inequality levels are around the EU average, but there are worrying trends in the data, according to Tasc. They argue that growing inequality leads to poverty and social exclusion, but also weakens the economy if fewer people have money to spend.