Turns out that Michael Douglas' revelation he got throat cancer through oral sex was the straw that broke the camel's back for Catherine Zeta-Jones.

The Hollywood couple announced yesterday they are to separate after 13 years to 'evaluate and work on their marriage' and Catherine is said to have wanted the split after Michael revealed his cancer was caused by the HPV virus, contracted through oral sexual contact. However, the 68-year-old star didn't make it clear he had contracted the virus before he met his wife, which is awkward. According to The Sun : 'It all went downhill from there.' You don't say.

As well as the Douglas' cancer battle - which he beat in 2011 - Catherine has been battling bipolar II disorder, which has led to her going to rehab for depression twice, most recently in May. It was at the end of that month the couple decided to split, although they are thought to have been leading separate lives for some time.

A source living near their mansion in Bedford, Connecticut, told The Sun: 'We have not seen much of Michael here with Catherine for about 18 months. Most of his friends are in New York. He likes the city and she likes horses and playing golf. They're like chalk and cheese.'

Michael - who has children Dylan and Carys with Catherine - is currently holidaying alone in Europe. He was pictured yesterday aboard a friend's yacht off the coast of Sardinia, appearing pensive ahead of the Deauville Film Festival in France, the event where he first met Catherine in 1998. 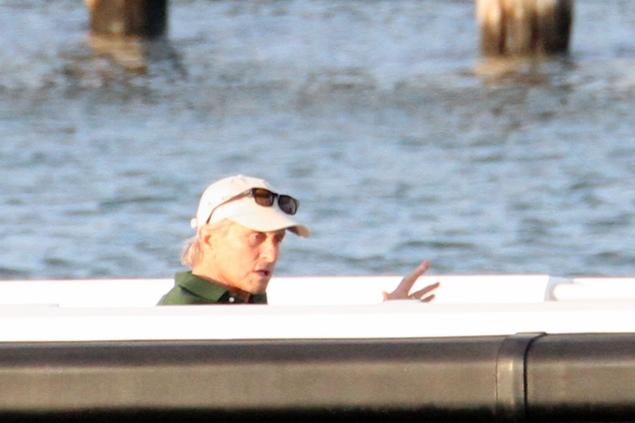 Michael had recently hinted their struggles had only served to make their relationship stronger saying: 'True love takes work. Love is an extraordinary feeling that comes from the bottom of your soul, but has to be nurtured, you know. The thing I've learned about getting older is you can't take love for granted. You protect it, nurture it and it grows and after one's initial, physical, emotional aspects, it becomes deeper.'

Catherine is believed to be staying in New York with the couple's children.