There are plenty of celebrities out there who are fitness fanatics and aren't shy about letting people know about it.

Whether that means they hit the gym all the time or they're out pounding the pavement, there are a lot of stars across movies, TV and music who are seriously fit. However, there are others that have some incredible athletic achievements under their belts, and aren't so well known for it, so here are 8 celebrities who you might not have known were fairly handy at a number of sports.

Before Ed O'Neill was the star of TV's biggest comedy, Modern Family, he was the star of TV's biggest comedy, Married With Children. In between that, Ed apparently trained his arse off, as the former college football player is a full blown, no bullshit black belt in Brazilian Jiu-Jitsu under the legendary Rorion Gracie - one of the founders of The UFC. O'Neill has been a black belt since 2007, and took up the sport when it was recommended to him by pal and famed director, John Milius. He's been tapping out people ever since. So, basically, what we're saying is Al Bundy could kick the absolute crap out of you.

Most of us will remember him from Lois & Clark: The New Adventures of Superman filling the role of Superman himself, but Cain wasn't just in good shape for that show, he was a hugely promising athlete when he was younger. In fact, he received a total of 17 scholarship offers from universities around the US, but ended up going to Princeton, where he played on the volleyball team as well as being a starter on the football team. When he graduated, he signed for the Buffalo Bills of the NFL, and was hoping to forge a career in football before a bad knee injury in training ended his career before it even began.

The British star of the hit CBS series Elementary always looks like he's in good shape in the show, but he's not just a gym fanatic - he's got a great marathon time and has ran ultramarathons too. Miller ran the London Marathon in a personal best time of 3.01, which is insanely quick for a non-elite athlete. Then, a couple of years ago he decided to run almost twice that distance in support of research for the rare disease Sanfilippo syndrome, raising tens of thousands of dollars in the process. He signed up for the epic Saharan Desert ultrarun Marathon des Sables in 2006 but couldn't take part due to filming commitments. Jaysus, take the finger out, Jonny.

Rogan is known for being somewhat of a tough guy in the world of comedy, but the UFC colour commentator is a legit martial artist. He won something called 'The Grand Championship' in a national Tae Kwon Do tournament, beating champions in three different weight classes; he was also recently awarded his black belt in 'no-gi' Brazilian Jiu-Jitsu by friend and BJJ phenomenon, Eddie Bravo and 'gi' Brazilian Jiu-Jitsu under the highly respected Jean Jacques Machado (with and without the suit, basically). Rogan has competed as a kickboxer too, winning two fights and losing one before deciding there was more money in not getting hit in the head so much. Still, you probably want to avoid getting kicked by him.

While he obviously has the nutrition thing down, celebrity chef Gordon Ramsey is a serious endurance athlete, having competed no less than 15 marathons with a personal best time of 3.30. The 47 year old is a stocky 6'2 and dips in and out of serious weight training depending on what type of event is on his schedule. Most impressively, though, Ramsey has completed the holy grail of triathlons, the Kona Ironman event in Hawaii, crossing the finish line in 14.04. Respect. Ramsay also had a brief history in football too, having a been a trialist at Scottish club Rangers before a ligament injury forced him to look at an alternative career path.Still, he's not shy about showing off his skills when he can.

The NCIS star has been appearing on our TV screens for years, but back in the 1970s, when he attended University College Los Angeles, he was none other than the starting quarterback for the UCLA  Bruins. In his debut, he lead the team to a win, upsetting the favourites against the defending national champions Nebraska, and ended his college career with an overall record of 17-5. We imagine he still has one hell of an arm...

Most of Guy Ritchie's films have been action-based, with a dollop of hand-to-hand combat, but the high level of his own training is genuinely impressive. Ritchie has a black belt in Judo and a brown belt in Brazilian Jiu-Jitsu - that's a higher grade than most UFC fighters. Speaking of which, when he's not successfully directing huge movies, he can be seen regularly cageside at UFC events, but for the most part he keeps his training private. Guy Ritchie directing a movie featuring the UFC anyone? Now that we'd pay to see.

Funnyman by trade, Stewart wasn't always wearing a suit and cracking jokes, and it might be hard to picture him as an athlete back in his college days. However, that might all change when you take a look at the picture of him below, as he played varsity soccer for the University of William and Mary, who made a couple of strong runs in the NCAA Championships during his time there. He's always been good at a punchline, but he was as good getting near the touchline, as he occupied the wide positions in midfield; former coach Al Albert described him as "feisty as a player, a very high-energy sort of guy". 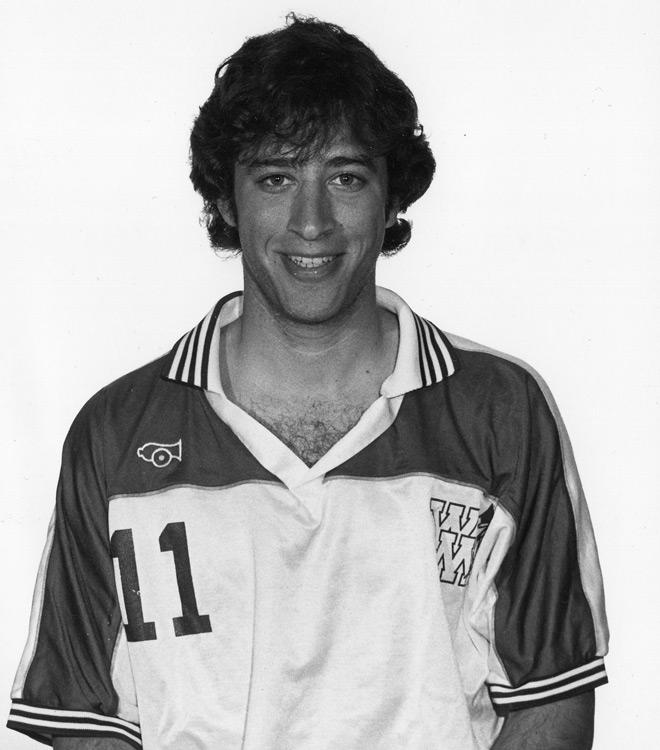 Check out the gallery below for a few more pics of the athletic stars.