Let's wildly speculate about the ending of this week's 'WandaVision'

We've got some theories.

As we know from watching 'WandaVision' these past few weeks, every episode ends on a cliffhanger.

While the most-talked about cliffhanger so far has been dropping Evan Peters into the Marvel Cinematic Universe and crossing the streams with the 'X-Men' franchise, this week's cliffhanger rung a little bit too hollow for our liking.

Wanda, as we know, appears to be losing control of Westview and is beginning to feel the stress and strain of maintaining the illusion of sitcom life around her. Their home, for example, flicks between the years and briefly shows up the "real" state of her home as a broken-down, hollowed-out wreckage of suburbia.

What's clear is that 'WandaVision' is not going to end well for anyone, and that eventually, Wanda is going to have to face the truth that Vision is dead, the kids aren't real, and that she's broken with reality as a coping mechanism. From the very beginning, there's an taste of bittersweet in it all, between Wanda and Vision waltzing around their '60s home to the arrival of the kids, but this week's ending was much, much different.

Confirming many theories that Agnes is in fact comic-book villain Agatha Harkness, she's revealed to have been behind it all, controlling not only the people around Westview, but also responsible for bringing the new Pietro Maximoff - played by Evan Peters - into the fold. As Wanda creeps into the basement of Agatha's home, she finds a witch's coven and an evil, glowing book and Agnes / Agatha revealing herself as the one who was behind it all.

On paper, there's a lot of it that makes sense. Wanda's powers suddenly involving this kind of magnitude, the fact that she didn't recognise Pietro initially, all of it - it all clips together quite nicely. Maybe too nicely? The one thing that's been repeatedly hammered throughout 'WandaVision' is that Wanda is suffering and is using the sitcom illusion to ease it. When people from outside attempt to change things, she reacts violently and forcefully. You even see it in this episode when Monica Rambeau tries to confront her and the two square up.

So, if she's able to sense and see where and when people are trying to overtly confront her, doesn't it make sense that she'd get that there's something up with Agnes / Agatha? Sure, she always seem to be conveniently there at just the right time, but the ending of this week's episode was just too theatrical and over-the-top. 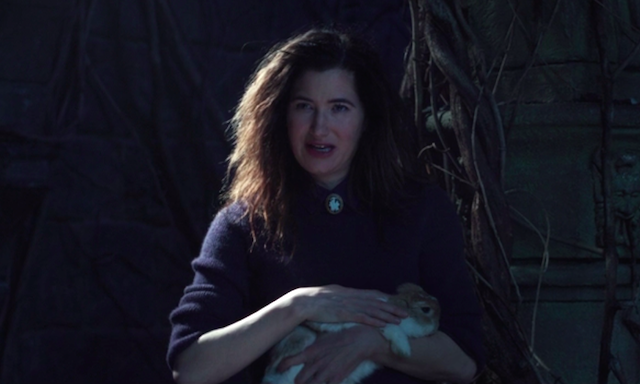 Come on, she's even petting a rabbit while she reveals her grand scheme...

What do we think is really going on then, you ask?

Just as Wanda invented the sitcom reality around her, she's also invented Agnes / Agatha Harkness. Our guess is that Agatha Harkness is going to be revealed as her psychiatrist / therapist. It could be that she was trying to coax Wanda to face reality but instead either manipulated her into fully utilising her powers to see how far they could push her. It could also be that Agatha Harkness was simply trying to her counsel and psychoanalyse her, and in doing so, Wanda cast her as the villain behind it all - rather than facing the truth that Wanda herself did all this, and that she - not Agatha - is the one behind it all.

In fact, there's a bit of precedent to back up this theory. In the reimagined comic-book storyline, 'Ultimate Marvel', Agatha Harkness appears as a psychiatrist working for SHIELD who is sent to conduct interviews with the Fantastic Four and "maximise their efficiency." It's later revealed in that comic that Agatha Harkness is in fact a thousand-year-old hydra monster who destroyed Atlantis, but the point still stands.

If Wanda is so desperately trying to maintain the illusion, and she's said that she's going to some dark places in her mind - that quip about it all being meaningless, for one - it'd make sense that she's going even further down and casting those trying to help her as outrageous, over-the-top villains who can also control people's minds. Not only that, when you go through the montage of her messing things up, there's a bit of logic to it.

Each time, she's trying to reach Wanda in a way that makes her confront the illusion. Pietro, for example, doesn't look like her brother and Wanda notices this immediately. When Agatha "freezes" Herb as he's trimming the hedges, Vision notices it and then begins to suspect that something's up with it. It could be that Agatha / Agnes is simply trying out a role-play experiment, not unlike 'Shutter Island', where she's playing along with it and then trying to coerce Wanda into facing reality rather than forcing her into like everyone outside is.

Or maybe we're reading into things way too much. Let us know what you think!